Cascada de Gujuli (I’ve also seen it called Cascada de Goiuri) was one of several waterfalls that we encountered between Burgos and Bilbao.

It featured a 100m drop with a plunging characteristic that was kind of reminiscent of say Tews Falls in Canada.

Like many of the waterfalls that we saw during our mid-June 2015 visit throughout Spain, this waterfall also struggled to flow (as you can see from the photo above).

Unfortunately, this lower-than-average flow kept this falls from being special.

In any case, what stood out most to us about Cascada de Gujuli was its name as it definitely wasn’t Spanish.

Indeed, the unique name of the falls was actually Basque (or Euskara), and it’s known in that language as Goiuriko ur-jauzia.

In fact, as we were touring the Basque Country, we really had to get used to the idea that Euskara was very different from the Romantic languages like Spanish, especially since Euskara was possibly more ancient.

As for the waterfalling experience, we started from a signed car park (see directions below).

From there, we walked the 0.5km trail on a well-defined track that started off as a continuation of the road before the vehicular part ended at a separate car park for the handicapped visitors (roughly five minutes walk from the general car park).

Beyond this car park, the trail continued its gentle descent between pastures while the path itself was lined with trees.

Since our hike was under some very dark clouds from a threatening storm, the trees kind of gave us some sense of rain shelter.

In any case, the walk was straightforward and very easy for our four-year-old daughter to do as well.

Once we got to the mirador, there was a small clearing in the vegetation to allow us to get a partial view of the Cascada de Gujuli plunging across the gorge.

There was also a playground-like metal platform for a slightly more elevated view of the falls.

However, with all the trees somewhat obstructing the view, it didn’t seem to improve the view that much.

This mirador also let us get partial glimpses further downstream at more of the gorge, which I’m sure would’ve been pretty dramatic had the views been more open.

So it didn’t take long before we had our fill of the Cascada de Gujuli.

About 30 minutes after we had gotten started on the hike, we were back at the car park.

Finally, we noticed in the literature that it was also possible to experience this waterfall from a lookout much closer to its brink on the other side of the gorge.

Unfortunately, we weren’t aware of this option at the time so we didn’t end up doing it, and thus, we can’t say anything more about it.

We visited the Cascada de Gojuri from Bilbao so we’ll describe the driving directions from there.

So from Bilbao, we drove south on the AP-68 autovía for about 38km.

We have to warn you that we encountered several tolls along this route so it might be a bit pricey.

Nevertheless, we then exited onto the A-2521 road due west and followed it for roughly 4.2km.

That was when we saw a signposted turnoff and car park to our right for the Cascada de Gujuli.

Overall, this drive took us on the order of 20 minutes or so.

Then, take the A-2521 east to the car park (involving a steep and narrow road climbing cliffs).

If you’re interested in what that part of the drive might be like, the A-2521 road between the AP-68 and Urduña will be described in the directions on the Salto del Nervión page.

Checking out the falls in low flow from its mirador 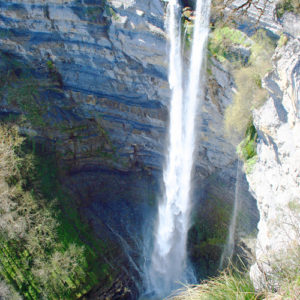 Cascada de Gujuli (Spain) January 13, 2020 4:56 am by Jose Luis Sanchez Esteban - This is a better look of this waterfall that deserves a more positive rating. I made the using rating 3.5 Based on user review and waterfall height (more than 100 m.) Less than 4 due to flowing variations. See submitted picture. ...Read More