The Cascada de la Cimbarra was said to be one of the top waterfalls in the Andalucía (or Andalusia; pronounced “ahn-dah-loo-SEE-ah”) region of Spain.

That said, it was actually quite close to the Castilla-La Mancha border.

Nevertheless, during our visit, the falls was struggling to flow, which you can see in the photo above.

However, given the fact that it had been hot and dry in this region of Spain for at least over a month, perhaps the fact that it still had somewhat satisfactory flow was a testament to its staying power.

In any case, even despite its struggling flow, the Cascada de la Cimbarra was popular enough that we had encountered dozens of people during our visit here in May 2015.

The Hike to the base of Cascada de la Cimbarra

From the car park (see directions below), we followed a well-signed loop trail heading counterclockwise.

The trail headed right towards the rim of the gorge carved out by the Río Guarrizas before following its contours in the downstream direction.

While on this stretch of the trail, Julie and Tahia had noticed that there was a tortoise sunbathing next to the trail (one of the benefits of getting a reasonably early start).

Eventually, the trail would curve around one side inlet before it started to descend towards a junction.

At this junction, we first went right to continue the descent down a couple of switchbacks.

This eventually descended through the ruins of an old mill (called El Molino de la Cimbarra) where there were still walls standing as well as a couple of circular mortars where I’d imagine local nuts could be ground into powder.

The trail continued to descend deeper into the gorge, where it started to became a little bit rough and less defined in spots.

But it wasn’t much later until we found ourselves right in front of the impressive Cascada de la Cimbarra at its base.

From this perspective, we could see that there was a little bit of an alcove behind the waterfall.

Moreover, it appeared that with a little climbing, it was possible to take an informal trail-of-use from the mill along the cliffs towards the alcove for that unusual back-of-the-waterfall experience.

We didn’t do that detour, and given the apparent exposure to dropoffs, it seemed like it would be prudent to be very careful if one were to be so inclined to do this.

When we had our fill of the base of the falls (voices seemed to echo down here), we then climbed back up to the junction.

Continuing beyond the trail junction, we ascended a short distance further before reaching the Mirador de Cascada de la Cimbarra.

From up at this sloping railed overlook, we were able to look right down at the waterfall itself as well as its surrounding gorge contours.

The overlook up here was wide and full of open space (i.e. it was also very exposed to the hot sun).

And a short distance beyond this overlook, there was a signposted trail pointing to a spur leading to the Mirador de Desfiladero.

This other viewpoint primarily focused on a very visible fold in the rock layer hinting at the violent forces that gave rise to this gorge in the first place.

Although the trail map said that the loop hike could continue back to the trailhead from the junction of the Desfiladero spur and the Mirador de la Cimbarra, there was actually another trail hugging the other side of the rim of a different gorge.

It turned out that this trail could’ve easily led us far away and downhill towards the Sendero del Arroyo de Martín Pérez.

In fact, it almost did that to us as we thought we were looping back to the car park!

Fortunately, we caught our mistake and wound up going back the way we came instead of taking our chances with trying to find the trail that would have completed the loop.

We eventually figured out that there was indeed a signposted trail between the false trail and the way we came, but we stuck with what we knew on that return hike anyways.

So overall, we spent about two hours away from the vehicle.

When we returned, the trailhead was full of cars, which contrasted mightily with when we were the only ones here at the start at around 10:40am.

I guess that attested to this waterfall’s popularity.

Anyways, the signage here said the loop trail was 1.2km and it should’ve only taken 30 minutes with low difficulty.

Thus, that should give you an idea of how much time to budget, especially if you want to linger here and not be in a rush.

To get to Cascada de la Cimbarra from Úbeda, we drove west on the N-322 for about 36km to its junction with the A-44 autovía.

We then headed north on the A-44 for about 3km before it merged with the A-4 autovía (Autovía del Sur).

We would follow the A-4 for the next 51km until we exited onto the A-6200 road heading towards Aldeaquemada.

Note that this turnoff was within the park boundaries of the Parque Natural de Despeñaperros.

Once we got off the autovía, we then followed the A-6200 eastwards as it climbed up a series of switchbacks and blind turns.

This road ultimately summitted the mountain then continued going east along the similarly narrow but more straightened out road towards the town of Aldeaquemada (some 23km later).

Once we were in the town, there were signs directing us to head south (turning right) on the Prolongación de Avenida Andalucía.

We then followed this road and the signposts for the Cascada de la Cimbarra for about 2.3km (the road became unpaved once it left the town) before reaching the trailhead near the summit of a some hill.

This drive took us just under two hours as most of the time on the road was spent navigating the narrow and twisty confines of the A-6200 between the A-4 autovía and the town of Aldeaquemada.

Checking out the falls from its base 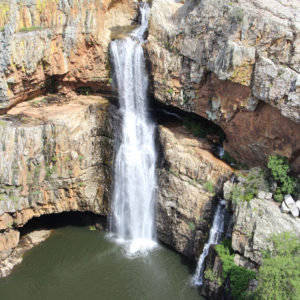 Cascada de la Cimbarra (Spain) January 13, 2020 5:29 am by Jose Luis Sanchez Esteban - This is a better look of this waterfall that deserves a more positive rating. ...Read More