The Cascada de Linarejos was our waterfalling excuse to check out the mountains of the Sierra de Cazorla.

However, as you can see from the photos on this page, this 60m tall waterfall wasn’t doing too well during our May 2015 visit.

Although it doesn’t seem like it in the photo above, the waterfall was flowing.

Moreover, in order to resolve the flow in photos, we had to zoom in enough to see its waterflow.

That said, this was probably the easiest of the waterfalls to access in the Sierra de Cazorla area.

Given how it appeared this part of Spain had already seen the last of its sustained rains at least over a month ago, this was the best that we could do under the circumstances.

Indeed, this was one of those waterfalls where we needed to time our visit for right after a sustained rain (something we didn’t have the luxury of doing when traveling from abroad).

The Hike to the Cascada de Linarejos

We started the hike to the Cascada de Linarejos from a road bridge over the Río Guadalquivir (see directions below.

We then followed a trail that skirted alongside the rim of the gorge carved out by the river.

This undulating path had railings in most of the spots that were exposed to dropoffs.

Thus, we were fairly comfortable letting our four-year-old walk (holding her hand of course) while doing this trail.

For the first 400m of this undulating hike along the rim, we then started to hear the roar of a waterfall.

The trail then started to descend into the gorge down a series of steps until we reached a dam that was releasing some of its water.

Unfortunately, this was the source of the noise and so our hopes that the legitimate waterfall would be flowing well took a turn for the worse.

Anyways, after walking alongside then below the dam, the trail then followed the base of the very tall cliffs flanking the Gorge of the Río Guadalquivir.

We encountered one Spanish family that was playing in the water amongst rocks at some small cascades downstream of the dam.

However, a short distance further from this area was the mirador along the trail looking across the gorge towards the Cascada de Linarejos.

It appeared that there were some trails that might have crossed the river then went closer to the base of that waterfall with its plunge pool, but we didn’t explore that option.

This was also the turnaround point of our hike as we opted not to complete the longer loop hike.

So we spent about 75 minutes away from the car though we went at a really slow pace given how hot it was during our visit (possibly between 35-40C).

The literature indicated that the full loop hike was only 1.6km requiring a minimum of 45 minutes.

Cascada de Linarejos resides near the town of Cazorla in the Jaén Province of Spain. It may be administered by the Parque Natural Sierras de Cazorla, Segura y Las Villas. For information or inquiries about the area as well as current conditions, you may want to visit this website.

To reach Cascada de Linarejos from Úbeda, we drove east on the N-322 to the town of Torreperogil.

Then, we followed the A-315 to the southeast for about 22km to the town of Peal de Becerro, where we then hopped onto the A-319.

We followed the A-319 further east into the town of Cazorla (after 13km) before continuing on the A-319 as it climbed up above Cazorla for the next 21km to the bridge spanning the Río Guadalquivir.

Right before that bridge, there was a tiny car park with room for probably four cars maximum (assuming they were parked in the right configuration, which you can see in the photo above).

Otherwise, you’d have to backtrack for 100-200m or so to get to the cafe which has a much larger roadside pullout space for car parking.

This drive from Úbeda to the trailhead would probably take about 90 minutes in each direction.

It took us about 45 minutes to get from Úbeda to Cazorla or vice versa.

Examining the waterfall at low flow 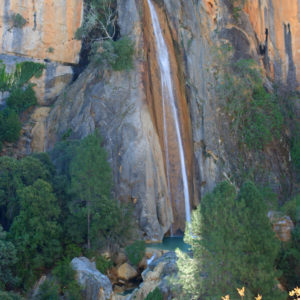