This was surprising considering that it was actually somewhat visible from the busy highway between Madrid and Burgos.

However, getting a closer look at this waterfall seemed to have all the elements of an off-the-beaten-path excursion.

After all, we had to go on a wide and unsigned (and seemingly abandoned) road without lines.

Then, we had to traverse some undeveloped bush property where trespassing signs seemed to be ignored.

Finally, we then had to scramble on an unmarked path that ultimately led us to the view that you see in the photo above.

In other words, Cascada de los Litueros was a bit of a short adventure.

Nevertheless, this waterfall was certainly worth the trouble as it featured an upside-down trident shape framed by a shapely rock near its top.

During our visit, it had felt like the area around Madrid hadn’t seem much rain in a while, but the fact that this waterfall flowed as well as it did was a testament to its reliability.

It also seemed like it might be one of those few waterfalls where it was possible to cool off around the plunge pool.

Therefore, this somewhat obscure waterfall could’ve offered that rare combination of play and scenery without the crowds (at least as of when we visited in early June 2015).

From the unmarked trailhead right at an apparent gate or archway hidden by trees (see directions below), we then followed a footpath.

It went past a sign saying something to the effect that we were passing through private property (from what I could tell based on my Spanish).

As the terrain opened up and was more exposed to the sun, we then continued along the path as it swung by another gate (which was unlocked) before following onto a wide path.

Just a few minutes later, we rock-hopped across the first stream crossing.

Then a short distance before reaching the second stream, we then scrambled up a prickly bush-clad hill, which clung to the slopes as it ultimately got us to the front of the Somosierra Waterfall.

We were content with our slightly elevated views of the Cascada de los Litueros, but it looked very doable to continue descending from the hill we were on in order to access the inviting plunge pool at its base.

As we took a look at our surroundings, we could see the noisy A-1 Autovía del Norte in the distance.

And after having our fill of the falls, we then returned to the car park by the way we came in.

Overall, we had spent about 50 minutes away from the car, but a lot of that time was spent just chilling out at the waterfall.

The walking time took us roughly 15 minutes in each direction (longer on the way there since we had to figure out the best path to scramble upon).

Although the hamlet of Somosierra seemed to be nothing more than a collection of a few buildings with a gas station and maybe some ranches, it was said to have had a bit of a violent history.

For it was here that the Battle of Somosierra took place in November 1808 during the Peninsula War.

There were clashes between Napoleon’s armies and the Benito de San Juan-led Spanish who tried to defend Madrid from falling under the French charge despite being outnumbered and outgunned.

Given the rugged terrain of the area (which was quite apparent when we did this hike), Napoleon took some losses when his Polish Chevau-legers unit led the initial charges.

However, that set the stage for later waves led by Napoleon and his troops.

The French army eventually overcame the defense at Somosierra (essentially Madrid’s last line of defense) and then they took over Madrid days later.

Given Somosierra’s close proximity to both Madrid and Segovia, Julie and I were quite surprised by how little known this waterfall seemed to be.

That said, I’ve also seen this waterfall referred to as the Nacimiento del Río Duratón.

In any case, this waterfall only seemed to be known to locals in the know or to waterfallers like ourselves willing to do a little more research before committing to an excursion abroad.

Cascada de los Litueros resides near the village of Somosierra in the Community of Madrid, Spain. It may be administered by the Community of Madrid though its access may involve going through private property. For information or inquiries about the area as well as current conditions, you may get leads from Madrid Tourism Board website.

To get to Cascada de los Litueros from Madrid, we had to drive north on the A-1 for about 80km.

There was a signposted offramp (possibly exit 91) for Somosierra, which we took and then followed its surface street (N-IA) for about 2km.

Once we got past the gas station and started to head back onto the A-1 North, there was an unmarked but wide access road on the right.

We took that access road (do not go on the freeway) and followed this for about one kilometer until we stopped the car at a very small pullout on the right side.

Overall, this drive had taken us between 60-90 minutes.

Going in the opposite direction, one would have to leave the A-1 southbound roughly 8km south of the N-110 / A1 interchange (under 150km or 90 minutes drive) south of Burgos.

Once we left the A-1 on exit 92, we then followed this road until we reached a left turn, where we would eventually wind up back at the gas station near the northern on-ramp for the A-1.

Going from southbound to northbound in Somosierra pretty much meant doing a U-turn so be careful about oncoming traffic.

The drive between Segovia (the nearest sizable city to the falls as well as where we were staying) and Somosierra took us approximately one hour.

For additional context, Madrid was 91km (over an hour drive) southeast of Segovia and 249km (2.5 hours drive) south of Burgos. 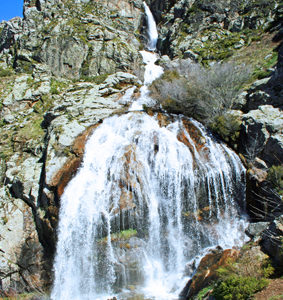 Cascada de los Litueros (Spain) January 13, 2020 5:24 am by Jose Luis Sanchez Esteban - I uploaded photos of this waterfall taken a sunny day in the rainy season, with an amount of water flowing that deserves a higher rating than 2.5 ...Read More