Unlike most of the waterfalls that we had seen throughout Spain to this point, this was one of the few that was supposed to be much wider than it was tall.

However, as you can see from the picture above, the waterflow was on the low side.

Thus, the waterfall was essentially segmented into two smaller waterfalls at the opposite ends of the exposed bedrock slab.

I’ve seen in the literature that under more normal flow (probably in the Winter and early Spring months on a year with healthy rainfall) that the segmentation was less pronounced.

This was probably one of the easiest and most convenient waterfalls for us to visit.

After finding parking along the main street of the relatively quiet town of Pedrosa de Tobalina (see directions below), we then walked to the signposted footpaths.

The footpaths eventually branched and led to both the top and bottom of the Pedrosa de Tobalina Waterfall.

Thus, I have to believe that this waterfall was also called by this name.

Beyond the signpost, we first walked on the upper path to the left, which led us a few paces (probably two minutes or so) to the brink of the waterfall.

The photo you see at the top of this page came from this vantage point.

After having our fill of this upper lookout spot, we then walked the lower path to the right of the fork.

The descending path remained paved as it went past some building before reaching the edge of the large plunge pool of the Cascada de Pedrosa de Tobalina.

We had to be a bit cautious on the downhill because it had been raining earlier in the day so the concrete surface was a bit slippery.

Anyways, it only took us 2-3 minutes to get down to the bottom, where we were able to get a partially obstructed view of the entire width of the falls.

I’m sure under more flow, the obstructions wouldn’t have had as much of a visual impact.

At the base of the falls, we saw some very large chunks of bedrock partially submerged in the plunge pool.

This attested to the process of erosion where I’m sure there were times when the underlying bedrock holding up the falls would collapse and make the waterfall’s brink slightly further up the river.

We also noticed some people were walking further upstream from the brink of the falls, which suggested to us that it was possible to walk a longer trail.

Perhaps that trail might have allowed walkers to notice even more things about the Cascada de Pedrosa de Tobalina than just what could be seen from the two lookout spots we had visited.

In any case, we can’t really say more about these other trails because we didn’t do them.

The Cascada de Pedrosa de Tobalina resides in the town of Pedrosa de Tobalina in the province of Burgos, Spain. It is administered by the local municipality of Valle de Tobalina. For information or inquiries about the area as well as current conditions, you may get leads from this website.

We visited the Cascada de Pedrosa de Tobalina as part of the long drive between Puentedey and Cascada de Peñaladros.

However, we’ll describe the directions from the main cities of Burgos and Bilbao.

From Burgos, we would head east on the N-I road (or the AP-1 autovía if you don’t mind paying the toll to go faster) for about 42km to the CL-632 road near the town of Briviesca.

Then, we’d follow the N-629 road for about 7km to the town of Trespaderne, where we’d continue on the Bu-550 road for another 7km to reach Pedrosa de Tobalina.

The waterfall was well-signed within town.

Overall, this drive would take on the order of 90 minutes to two hours.

From Bilbao, we would take Bi-636 road southwest for about 13km, then turn left onto the Bi-2604 road (just past the town of Sodupe and towards Zubiete).

We’d follow this road for about 12km as we’d then turn right on the A-624 road in Artziniega, then turn left onto the A-2602 road.

Following the A-2602 road for about 2.5km, we then kept left onto the Bu-550 road and followed it for about 38km southwest to the town of Pedrosa de Tobalina.

Overall, this drive should take about 90 minutes or so.

Checking out the falls from both its top and its base 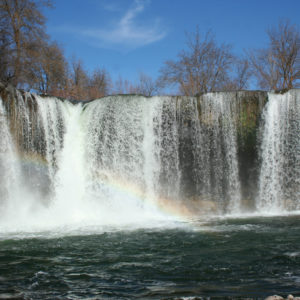 Cascada del Peñón (Pedrosa de Tobalina) January 13, 2020 9:10 pm by Jose Luis Sanchez Esteban - A couple of better looks of the whole waterfall and of its leftmost side, deserving a higher rate. ...Read More