Dolgoch Falls was really a series of three waterfalls all running fairly far apart from each other on the Nant Dol-goch.

While the signs indicated the trail was said to be a modest one mile in length in each direction, it got surprisingly sweaty and hot on the partly cloudy day that we did this hike.

Part of the reason we languished on the hike was that it was steeply uphill on the way to the uppermost waterfall.

Moreover, the trail was pretty much sheltered from any breezes or wind since we were deep inside a gorge, which conspired to make the hike feel muggier.

The trail followed the stream almost the entire way, and in a bit of a surprise, we passed by several cave entrances.

We even noticed a young spelunking group who happened to be on the trail with us while donning hard hats with headlamps as they explored these caves.

Experiencing Dolgoch Falls – From Car Park to the First Falls

Julie, Tahia, and I all began from a large car park in front of a hotel and restaurant (see directions below), where we paid 2 pounds to park for four hours.

After walking on the well-signed and wide trail besides the hotel, we then went through a gate where right behind it was a donation box as well as a spur path leading to the Dolgoch Train Station.

Shortly after this, we then crossed beneath what appeared to be a partially concealed arched railway bridge before the trail followed the Nant Dol-goch stream in earnest.

We then went past a branch in the trail where the right branch went across a bridge traversing the stream before continuing upstream.

We decided to continue to the left of this junction, and barely 15 minutes from the start of our hike, we suddenly came upon the lowermost of the Dolgoch Falls.

This first waterfall appeared to be viewable from the other side of the stream, which we knew we could get to from that bridge we skipped earlier.

But we figured we could come back to that side towards the end of the hike.

In any case, this first of the Dolgoch Falls was short (maybe 10m tops) but quite attractive with its two-tiered drop.

Right besides this falls on our side of the stream was an eerie cave entrance.

I actually took some time to go in there trying to see where it ultimately went though I didn’t bring out a torch.

Still, there was enough natural dim light for me to get to the opening on the other side of this apparent tunnel, and that was when I was stopped by a locked gate.

It didn’t look like there was much of a trail continuing on the other side anyways so I turned back.

Experiencing Dolgoch Falls – From the First Falls to the Second Falls

Beyond the first of the Dolgoch Falls, the trail then proceeded to climb steeply above the main drops of the waterfall.

We opted to continue following along the Nant Dol-goch stream while seeing a few more smaller upper tiers of this lower falls.

There was another branch of the trail that went left (further away from the stream), but that went to the Ceunant Dolgoch (cuenant meaning “ravine”), which we decided to skip.

Then, we reached another branch in the trail where a bridge crossed the stream above the falls, and I was sure it would loop back down to the other side of the first bridge we saw.

Again, we left this for later.

Next, the hike continued to meander alongside the Nant Dol-goch stream while climbing gently and passing by a couple of more cave entrances.

One was near a bridge, and so the bridge was named Pont yr Ogof, which I believe would translate to mean Cave Bridge.

Anyways after nearly another 30 minutes of hiking beyond the first waterfall, we then reached a viewing area of the second Dolgoch Falls.

This one featured a two-tiered drop (as shown at the top of this page).

However, during our visit, there was a lot of overgrowth conspiring to keep us from seeing as much of the waterfall as we could.

The mid-day sun was also right against us so that kind of made taking photos difficult.

Experiencing Dolgoch Falls – From the Second Falls to the Third Falls

Right after this Middle Falls, we then continued up even more steep steps.

This trail would switchback its way up to the uppermost reaches of the gorge yielding some short glimpses of the valley below.

After about 10 more minutes, we then were at another bridge spanning the Nant Dol-goch (though a sign called this one bridge 4).

At this bridge, we got a view of the third and last of the Dolgoch Falls.

This waterfall was more like a rocky cascade, and I’d argue it was a bit of an anticlimactic end.

However, just beyond this bridge, there was a very peaceful picnic area where it was possible to just chill to the soothing sounds of the stream as well as the nearby waterfall.

This picnic area was the end of the trail as it didn’t continue further downstream so we had to retrace our steps.

Since the return hike was mostly downhill, things would go a bit quicker.

On the way back, we returned to the spots that we had skipped on the way up.

This included the middle bridge at the top of the first waterfall, which led us onto a different trail that passed by a thin but attractive small cascade.

Then, we noticed a couple of spur trails leading to overlooks letting us look down at the Lower Dolgoch Falls.

Eventually, the trail would switchback one last time before we’d reach the base of that first waterfall on the other side of the stream.

This was that view that we noticed earlier in the hike that we opted to punt for later (which was now).

From this viewing angle, the Lower Dolgoch Falls was tumbling more directly towards us so it looked thinner and more vertical than before.

Still, it was a nice little photo spot for people shots so I took plenty of photos of Julie and Tahia smiling before the falls at this spot.

Eventually after 90 minutes on the trail, we were back at the large car park where Julie treated herself to some takeaway sandwiches at the cafe here.

I didn’t see a formal Welsh name for the Dolgoch Falls.

However, I’d imagine it could be called Rhaeadr y Dol Goch, meaning the waterfall of the red meadow.

It’s not clear to me the reasons behind the red meadow reference (assuming I interpreted the name correctly).

By the way, according to my Welsh dictionary, nant means stream so Nant Dol-goch would be the “red meadow stream”.

We visited Dolgoch Falls as part of a long loop drive that started and ended in Conwy.

Dolgoch Falls was in the far southwestern extreme of Snowdonia National Park though it could be argued that we were much closer to the Mid-Wales town of Aberystwyth than we were to the North Wales town of Conwy.

Anyhow, from Conwy, we drove south on the A470 for a little over 50 miles to the A493 in the southern part of Snowdonia National Park passing through Blaenau Ffestiniog as well as a handful of other towns.

This stretch of road took us roughly 75 minutes.

We then kept right onto the A487 (a pretty scenic part as it passed through a gorge) and followed this road for another 4 miles before turning left to go onto the B4405 road towards Tywyn.

Then, we followed the narrow B4405 road for the last 7.2 miles towards the well-signed car park for Dolgoch Falls on the left.

This final part of the drive passed by a scenic lake called Tal Y Llyn (The Tall Lake?), which was a nice photo spot. 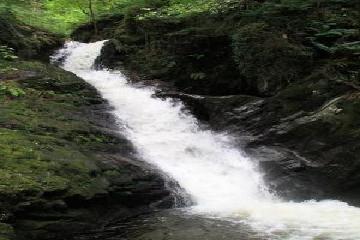 Dolgoch Falls (Wales UK) February 14, 2013 4:53 pm by Ruth Williams - The Dolgoch Falls are a series of three waterfalls near Tywyn in the South Western corner of the Snowdonia National Park in North Wales. There is a large (pay) car park in front of the Dolgoch Falls Hotel and from there it is about a one mile walk to see the falls. The path to… ...Read More