The Fallbach Waterfall was a pretty easy waterfall to visit.

In fact, it seemed like everything about my visit to this waterfall was with the family in mind.

Even the walk to the base of this towering 200m nearly freefalling cataract was very easy to do as it only required about 30 minutes total to take it all in.

There was even a playground at the Erlebnispark (Adventure Park) adjacent to a good chunk of the walking path to get to the base of the waterfall.

Indeed, while some of the adults would be preoccupied with doing the more ambitious excursions to the Fallbach, the kids could play in the playground.

The playground was decked out with a rope-pulling raft, large slides, zip-line-like one-way hang pulleys, and a bunch of other things you’d find in most playgrounds.

Finally, there have been claims that Fallbach was the Carinthia Province’s highest waterfall.

However, a sign here conceded that title to the Melnikfall further up the Maltatal Valley at 300m in cumulative height.

Either way, the signage here still considers this to be Carinthia’s mightiest waterfall given its high volume flow.

Speaking of adult excursions, I began my visit by paying 5 euros for adult admission (under age 3 are free; typically open from 9-5 as of my July 2018 visit).

Then, I walked out the other side of the gift shop and took the path on the right to go around the kids playground on the left.

The gradually ascending footpath was flanked by the playground on one side and a cow pasture on the other.

Eventually after reaching the end of the playground, I then crossed a fence.

Beyond the fence, the path went onto what appeared to be a continuation of the cow pasture while the path climbed to the lookout at the top of a small hill right at the base of the Fallbach Waterfall.

The catch with this part of the trail was that there were cow patties everywhere as a result of this being part of the cow pasture.

Once I made my way up to the top of the short hill to get a closer more intimate look up at the Fallbach, I was also able to turn around and get nice views across the Maltatal Valley.

In the morning, those views have perfect lighting, but I’d be looking against the sun at the waterfall.

In the afternoon, the opposite would be true.

It only took me about 45 minutes away from the car (15 minutes more than the recommended time), but I lingered for quite some time.

Had our daughter taken the time to check out the playground, I could’ve easily lingered here a bit longer to let her play.

Other ways to experience Fallbach

As for lingering for longer to do more ambitious excursions, I noticed on a map that there was a steep path taking you up to a lookout half-way up the full height of the Fallbach Waterfall.

There were closure signs during my visit in July 2018 so I’d imagine that path was no longer possible due to the rockfall danger.

There was also a longer trail from a different car park that would have taken you to the same spot on a more gradual trail as well as going all the way to the top of the waterfall.

Neither of those additional things I took part in, but it did seem like an option if the base of the Fallbach Waterfall left me wanting to do more.

Fallbach resides in the village of Fallbach near the town of Malta in the state of Carinthia (Kärnten), Austria. It may be administered by the Fallbach community. For information or inquiries about the area as well as current conditions, you can try visiting their website.

We managed to reach the Fallbach Waterfall after driving from Millstatt.

Therefore, I’ll describe the driving directions from there.

From Millstatt, we drove west on the B98 for about 8km to the A10 autobahn ramp heading north (right).

Once on the autobahn, we continued for about 9km.

Then, we took the exit 130 for Gmünd, which swung us around for about 1km to a roundabout.

We then took the second exit to keep straight and did the same thing at the next roundabout.

Afterwards, we were on the Maltatal Landesstraße and we continued on this road for about 11km to the well-established car park for Fallbach on the right.

You can’t miss it because the Fallbach Waterfall was clearly visible from the Maltatal Landesstraße.

Overall, this drive took us about a little over 30 minutes. 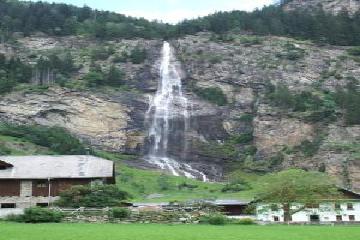 Fallbach (Austria) August 28, 2011 1:45 pm by Ruth Williams - The Fallbach waterfall is situated in the beautiful Maltatal valley in Carinthia Southern Austria. Maltatal is known as the valley of the waterfalls and is particularly popular for ice-climbing on the frozen falls in the winter. The Fallbach plunges 200m in freefall over the mountain side. It is easily visible from the road where there… ...Read More