That upper waterfall was concealed because it managed to punch a hole in a wall revealing a natural bridge that I believe was called the Hexenkesselsteg (or Witches Cauldron).

Together the Schwarzbach Creek was said to have a cumulative drop of 76m over the waterfalls.

The main lower waterfall probably dropped on the order of 31m or so, and it was by far the more accessible of the two.

The upper drop is said to be taller at 45m, but given its concealed location, it was harder to tell if that height figure was true or not.

Given its close proximity to Salzburg, this was a very popular waterfall.

It could very well have been the closest waterfall to the famous city that we visited on our big Austria and Germany trip in 2018.

Yet despite its fame, I should mention that this waterfall was referenced in the literature several different ways.

While I’ve gone with the plural reference since there was more than one waterfall, people have also referred to this as the Golling Waterfall, Gollinger Wasserfall, Gollingfall, and Schwarzbach Wasserfall.

That latter name also happened to share the same name as a waterfall in South Tyrol in Northern Italy.

From the car park (see directions below), we walked towards the kiosk, where we paid a modest fee of 6 euros for two adults.

Our daughter got in free.

Then, we followed a flat walk towards another kiosk that wasn’t operational during our visit.

Next, the trail followed the Schwarzbach (Black Creek) upstream less than 200m before arriving at a curve right in front of the impressive Lower Golling Waterfall.

Along the way, we noticed a mill on the other side of the Schwarzbach.

A signpost merely referred to it as the Old Mill at the Golling Waterfall (or Alte Mühle am Gollinger Wasserfall).

This mill dated back to 1618 back at a time when the Torren District sought to be self-sufficient on locally grown agricultural goods, especially grains tilled and processed here.

The Lower Golling Waterfall had a satisfying shape with thinner strands fanning out at its sides.

Boulders fringed the front of its plunge pool, which lots of people scrambled onto to get as close to the spray as they could.

Given how easy it was to access, plenty of families and kids were content just to enjoy this waterfall and go no further.

After having my fill of the base of the Lower Golling Waterfall, I then went up moderately ascending steps revealing more elevated views of the main waterfall.

The trail continued climbing upstream of the lower waterfall until it eventually reached one end of a metal footbridge.

Called the Rainbow Bridge, it spanned the Schwarzbach while fronting the base of the Upper Golling Waterfall.

Unfortunately, most of the waterfall was hidden from view as a result of a rock wall blocking most of the line-of-sight.

However, a lot of mist came blasting out of the natural arch at the bottom, which often made photographing the hole from the bridge difficult.

Beyond the bridge, the trail continued its ascent until reaching another fork.

On the right side of the fork, the trail meandered a short distance further around a bend before ending at a dead-end right in front of the Source Cave (or Quellhöhle).

This was where the Schwarzbach gushed out of a cave and promptly started its steep descent.

The left side of the fork descended towards the Witches Cauldron Bridge, which was right atop the rock wall supporting the natural bridge.

You can’t see the natural bridge from up here, but you can get awkward and very close views of the Upper Golling Waterfall itself.

Also from this vantage point, I was able to look downhill across the Salzachtal, which was the very valley within which the city of Salzburg resided in.

After having my fill of these spots, I returned the way I came.

Overall, I spent about 75 minutes away from the car.

Of course if the goal was just to visit the lower waterfall and come back, then this excursion could be as little as 30 minutes.

The Golling Waterfall resides near the town of Golling in the state of Salzburg (Salzburgerland), Austria. It may be administered by the Golling government. For information or inquiries about the area as well as current conditions, you can try visiting their website.

We’ll describe the driving directions from Salzburg since it made the most sense for most people to base themselves in the charming city.

So from Salzburg, we headed south on the B150 out of the city center and towards the A10 autobahn.

Heading south on the A10, we then drove about 19km before we then took the ramp for the Golling exit.

After crossing over the Salzach River, we then took a left turn to head into Golling via the B159.

After keeping left at a main fork to take Durchlassstraße (as opposed to Obergäu on the right), we then drove roughly 400m before turning left at the bridge over the Salzach.

There were signs for the Golling Waterfall at this point.

After going over the bridge, we drove on the Wasserfallsstraße a little over 2km before reaching a very narrow road that accessed the Golling Waterfall car park.

This drive took us about a half-hour from the Salzburg city center.

Sweep covering the main waterfall right at its base


Sweep covering the main waterfall from higher up on the trail 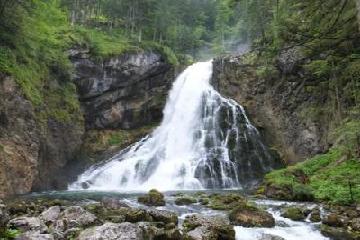 Golling Waterfall (Austria) December 29, 2015 2:45 pm by Ruth Williams - The lovely Golling waterfall is set amidst pine trees and plunges 75 metres in 2 drops. It is located not far from the city of Salzburg near the village of Golling an der Salzach. You have to pay to view the fall but it is not expensive. From the car park it is a pleasant… ...Read More