While there were probably too many waterfalls to count, the main waterfalls I’m highlighting here were the ones that we’ve noticed and identified.

The other waterfalls that I didn’t mention that were accessible from the Grossglockner Hochalpenstrasse each had their own writeups.

We happened to find this waterfall as we were taking the spur out-and-back road leaving the B107 Road onto the Grossglockner Hochalpenstrasse, which ultimately led us to the dead-end at the view of the Pasterze Glacier.

Looking downslope from the road, I noticed another tall waterfall deep in the ravine below, which I suspect might be the Leiterbach Wasserfall.

The pullout fronting the Fensterbach Waterfall was about 3km from the turnoff leaving the B107 Road.

On a side note, I’ve seen the Fensterbach Waterfall erroneously referred to as the “Energiedusche Wasserfall” because there was an interpretive sign here discussing how negative ions help the body’s lungs and nervous system.

Thus the sign’s title was translated as the “Energy Shower Waterfall” and it was not the actual name of this waterfall!

The next waterfall that we stopped for was the Nassfeld Waterfall.

We spotted it at a pullout at a hairpin turn (roughly 3.3km west of the Fensterbach Waterfalls) near a small dam holding up a reservoir that gave the water a gorgeous blue-green color when the sun was out.

From this pullout, we walked a short distance on a gravel track that led us alongside the reservoir right in between a pair of waterfalls spilling from opposite sides of the cirque we were in.

To be honest, I’m not sure which of the two waterfalls was the Nassfeld Waterfall.

Was it the one to the left nearest to us?

Or was it the one across the reservoir that seemed to be bigger and more significant (let alone more picturesque).

Whatever the case, we were able to experience this short stop in about 15 minutes before heading back to the car.

Experiencing the Grossglockner Waterfalls – the rest of the roadside waterfalls

As for the remaining waterfalls, the ones on the North Face of the mountains upon which the Grossglockner Road climbed past the first four or five numbered stops each may have names.

However, I’m unable to correlate what we saw with what the maps suggested.

In any case, these north face waterfalls could have fallen on the…

There were also a few more cascades we spotted and didn’t stop for except for one at the Guttalbach.

This was where a pair of mountain cascades fed this creek that went beneath the B107 and further down into the Möll River way downstream.

Indeed, the waterfalls mentioned on this page merely indicated the kind of mindblowing scenery to be had on the Grossglockner High Alpine Road.

Of course, you can’t miss the Grossglockner Peak and the Pasterze Glacier, which was said to be Eastern Europe’s longest glacier left standing.

There was also the Heiligenblut town as well as numerous other overlooks including the Edelweissspitze and some surprise tarns and lakes en route.

The Grossglockner Waterfalls were but just one aspect of the sights here.

The Grossglockner Waterfalls reside along the Grossglockner High Alpine Road between the towns of Fusch an der Grossglockner and Heiligenblut in the state of Carinthia (Kärnten), Austria. It may be administered by the Fusch government. For information or inquiries about the area as well as current conditions, you can try visiting their website.

To access the Grossglockner High Alpine Road (or Großglockner Hochalpenstraße), we could do the 48km drive from one of two different directions – the north or the south.

We’ll first describe the driving directions to the toll station on the north side from Zell am See.

We’ll also describe the directions to the toll station on the south side from Lienz.

Accessing the Grossglockner High Alpine Road from Zell am See

From the center of Zell am See, we drove south on the Brucker Bundestraße as it entered some tunnels leading me onto the B311 going south.

Note that if you’re coming from Sankt Johann im Pongau, then this road would be accessed from an off-ramp leaving the B311 at about 33km west of the city.

Once off the highway, turn left to go south on the Glocknerstraße.

While on the Glocknerstraße, the road then headed south for a little over 13km to the toll booths, where we had to pay 36 euros (as of 2018) to proceed onwards.

In any case, this 20km drive would take under 30 minutes.

Going in the opposite direction, from Lienz, we would drive on the B107 northeast towards Winklern.

Then, we’d continue driving north on the B107 for about 26km to the toll station just uphill from Heiligenblut.

Overall, this drive would take about 45 minutes.

Note that the spur road leading to the dead-end at the Pasterze Glacier and the lookout for the Grossglockner Peak was 26km south of the tool booth at Ferleiten and about 4km north of the southern toll booth by Heiligenblut.


Long video dwelling on the beautiful scenery around the Nassfeld Waterfall 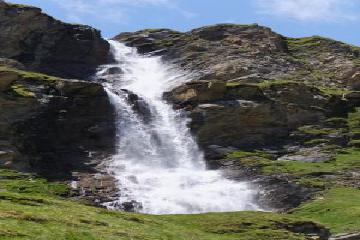 Nassfeld Waterfall (Austria) June 12, 2016 12:36 pm by Ruth Williams - The Nassfeld Waterfall is high in the mountains of the Hohe Tauern National Park in Austria. Although at an alltitude of 2528m above sea level it is easily accessible as it sits beside the Grssglockner High Alpine Road. This spectacular toll road which is one of the highest in Europe is 48km long and has… ...Read More