With a cumulative drop of 65m over at least three main drops having an average flow of 200-250 L/s, it was also said to be the highest waterfall in the state of Styria.

That’s saying something because I swore I saw something taller at the Steirischer Bodensee earlier on in the trip.

Nevertheless, even with this superlative to hang its hat on, I think the main reason why this particular waterfall didn’t quite have the same fanfare as most of the other waterfalls was its location.

It didn’t seem to be on any route that tended to get a lot more tourism traffic, since it sat towards the mountainous and less-populated south-central part of Austria near Krakaudorf.

Still, the relative peace and quiet of this excursion was very refreshing.

There were actually a pair of parking areas to start the walk to the Guenster Waterfall (see directions below).

The nearest one was in a clearing by a cafe and little animal park, but I happened to start at a more distant car park which passed by the nearest one anyways.

That added an additional 600m (maybe 10-15 minutes) of walking in each direction.

From the nearest car park, after only 160m or so, I reached a signed fork, which turned out to be the beginning and end of a loop.

So I kept right, which put me on a path that went right to the Guenster Waterfalls immediately.

After passing a little money drop (which was strangely open so anything you put in there might surely be taken unless it’s cheap change), I found myself on a boardwalk hugging the adjacent cliff wall.

Then after a few paces more, I was right in front of the bottom of the Guenster Waterfall with its multi-tiered drop while also spanned by a bridge over its brink.

The trail continued as it climbed up a series of steep steps alongside the waterfall before reaching a junction.

At this junction, I couldn’t go straight and follow that path to the footbridge spanning the brink of the falls because it was closed due to repair work that was going on.

So instead, I went left and up another steep series of steps before I found myself at the top.

At that point, I then descended towards the cliff edge on the left, where there were a couple of top down lookouts over the entirety of the Guenster Waterfall.

That said, there were some some cliff and foliage obstructions ensuring that I’d never really get a clean look.

After having my fill of these spots, I then descended the slope some more before rejoining the start of the loop.

Finally, I continued back the way I came to complete the excursion.

Overall, I had spent about an hour away from the car even with inadvertent extra hiking so I’d imagine that it would take most people less time to fully experience the Guenster Waterfall.

The Guenster Waterfall resides near the town of Krakaudorf in the state of Styria (Steiermark), Austria. It may be administered by a private owner residing in Krakaudorf. For information or inquiries about the area as well as current conditions, you can try visiting the Krakaudorf website.

It’s hard to say what would be the strategic starting point on a drive to reach Krakaudorf and subsequently the Guenstner Waterfall.

So I’m just going to describe how I did it from Zell am See.

For other starting locations, I’d imagine if you do a town-to-town routing on an app like GoogleMaps using Krakaudorf as one destination, then I think you’re well on your way.

Driving from Zell am See to the Guenstner Waterfall

I then followed the B311 for about 46km towards Bischofshofen before taking the ramp to get onto the A10 autobahn heading east.

Once on the A10, I continued driving east for about 16km before taking the exit 63 (Altermarkt) on the right, which would get me onto the B320 Road.

Note that while it was possible to go faster by staying on the A10 autobahn, there was a very long tunnel and toll to pay by going that way.

Given the relative lack of amount of time difference on this drive, I opted not to take it.

In any case, I continued on the B320 before turning right onto the B99 at Radtstadt.

I then followed this road for about 38km before keeping left to switch onto the B95.

After 11km, the B95 joined up with the B96 at Tamsweg, and then I continued driving east on the B96 for about 19km before making a sharp left turn onto the L522 road towards Krakaudorf.

I then followed this narrow and winding road for nearly 3km, then I turned right onto the Krakaudorf Road (there was a waterfall sign at this point).

Next, I followed the Krakaudorf Road for about 3km to a spillover car park in a large pullout on the left.

In another 400m, there was another turnoff on the left, which led onto a short unpaved road leading to the nearest car park after another 200m.

Overall, this drive took me about 2 hours.

If you’re coming from Millstatt, I’d recommend driving west on the B98 towards the A10 autobahn heading north.

Then, I’d continue north on the autobahn for about 37km to the exit 104 (St Michael im Lungau), which joined up with the B96 heading east.

Next, I’d follow the B96 east through Tamsworth and eventually to Krakaudorf as described earlier.

This route would take about 83km (a little over an hour) though it might be subject to tolls.

There was also a more inland route from here on the B95 and B97 to Murau, but that meant a longer drive taking over 90 minutes.


Video revealing a more elevated view of the Guenstner Waterfall 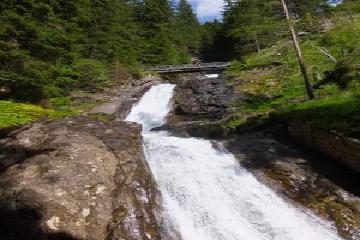 Günstner Waterfall (Austria) September 5, 2014 7:52 pm by Ruth Williams - You will find the Günstner Waterfall located in the Austrian province of Styria between the villages of Schöder and Krakaudorf. From the road an unpaved track leads to a parking area and then it is only a ten minute walk to the fall. The Günstner Waterfall is 65m high and approximately 250 litres of water… ...Read More