The Jungfernsprung Waterfall was another one of the roadside waterfalls along the non-toll part of the Grossglockner High Alpine Road.

However, this particular one happened to be signposted with a car park and a cafe.

This was where the Zopenitzenbach plunged straight down over a 130m cliff.

I found it interesting that there was some Slovenian heritage regarding this waterfall because the name of the creek came from the Slovenian word “zopenitzen” meaning “waterfall stream”.

Legend had it that a beautiful dairymaid lived near here and was woo’ed by all the young men in the area.

However, the Devil tried to disguise himself as a handsome man and stalked her.

The maiden caught onto his plot and tried to run from him, eventually leaping off the cliff by the waterfall.

Amazingly, she survived unhurt and thus the waterfall was so named.

Even though there was a circular trail leading closer to the base of the waterfall (said to require at least an hour), I was actually quite content to view the falls from the far northern end of the car park.

This view yielded a direct view of the Jungfernsprung itself as well as the cascades below it.

So I can’t say any more about what that trail was like.

There was also an elevated viewing platform closer to the Hexenkuchl (Witches Kitchen), where there were interpretive signs as well as a wooden carving of the namesake maiden herself.

However, I felt the view from here wasn’t as good given the angle of the line-of-sight to the falls.

Jungfernsprung resides near the town of Heiligenblut in the state of Carinthia (Kärnten), Austria. It may be administered by the Heiligenblut government. For information or inquiries about the area as well as current conditions, you can try visiting their website.

The Jungfernsprung Waterfall was right off the B107 portion of the Grossglockner High Alpine Road (or Großglockner Hochalpenstraße).

I’ll describe the driving directions from both Zell am See to the north as well as Lienz to the south.

Driving to Jungfernsprung from Zell am See

From the center of Zell am See, we drove south on the Brucker Bundestraße as it entered some tunnels leading me onto the B311 going south.

Note that if you’re coming from Sankt Johann im Pongau, then this road would be accessed from an off-ramp leaving the B311 at about 33km west of the city.

Once off the highway, turn left to go south on the Glocknerstraße.

While on the Glocknerstraße, the road then headed south for a little over 13km to the toll booths, where we had to pay 36 euros (as of 2018) to proceed onwards.

Then, we would continue another 36km south along the B107 Road all the way to the Jungfernsprung car park on the right.

This drive would take about 90 minutes, and it would require a toll since it involved driving through the Großglockner Hochalpenstraße.

Driving to Jungfernsprung from Lienz

Going in the opposite direction, from Lienz, we would drive on the B107 northeast towards Winklern.

Then, we’d continue driving north on the B107 for about 17km to the car park for Jungfernsprung on the left (roughly 9km before the toll station just uphill from Heiligenblut).

Overall, this drive would take a little over 30 minutes, but a toll wouldn’t be required because it wouldn’t cross any of the toll booths.

Short video showing Jungfernsprung from the most revealing spot 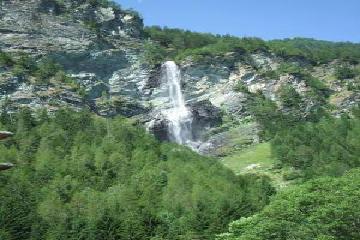 Jungfernsprung (Austria) May 13, 2011 7:12 pm by Ruth Williams - The Jungfernsprung is located in a stunning valley near the village of Heiligenblut in the Hohe Tauern National Park in Austria. The fall drops 130m and can be easily viewed from the road. There is a trail through the forest to the base. The falls name comes from a local legend which tells of a… ...Read More