The glacier was actually called the Weißseeferner Glacier, and we happened to notice some of other glacier arms (like the Gepatschferner Glacier), which produced waterfalls as well.

These waterfalls provided our waterfalling excuse to check out the scenic valley and toll road.

The Kaunertal Glacier Road was a 26km road that ultimately climbed up 29 hairpin turns (kehre is like curves in German) to an elevation of 2750m (said to be one of the highest paved roads in the Alps).

As for the waterfalls themselves, the most notable ones that we’ve managed to encounter and identify were the…

We were able to view all of them along the roadside at various parts of the drive.

To give you an idea of the time commitment involved, this out-and-back drive took us a total of the better part of a half-day (at least 4 hours).

That said, we made numerous stops along the way, and we also made a break for lunch at the Gletscherrestaurant Weisssee at the very end of this road.

We first Kaunertal Waterfall that we encountered was the 140m high Wurmetalbachfall (or Wurmetalbach Waterfall).

This waterfall sat at about 3km south from the dam holding up the Gepatsch Reservoir.

There was signage as well as small pullouts on either side of the bridge over the Wurmetalbach Stream.

However, we were looking against the sun with this waterfall in the morning since it was west-facing.

Thus, I’d imagine that the best time to photograph the Wurmetalbachfall was in the afternoon.

This was a tall and thin waterfall, which showed up well in the morning since it was facing east.

We managed to pull out for this waterfall at various points starting at 200m south of the Wurmetalbach Waterfall.

Like the Wurmetalbachfall, this waterfall also faced west so we were looking against the sun from the road bridge over the Bliggbach.

There were also some pullouts to stop the car and get a closer look a little south of the bridge.

Beyond the Bliggbachfall, the Kaunertal Glacier Road started climbing steeply up several twists and switchbacks.

Along the way, we started to notice the Rifflbach Waterfalls, which was really a series of cascades gushing on the namesake Rifflbach Stream itself.

According to the brochure they handed out to us at the toll station, there was a short 15-minute hike to the falls from the signpost 23.

Lastly, when we made our return from the Kaunertal Glacier Road end, we noticed a very tall waterfall spilling beneath what I believed was the Block Glacier.

So I informally called it the “Blockgletscher Waterfall” since it didn’t seem to have an official name.

We spotted this waterfall near the top of the road curves between the signed stops 24 and 25.

There may be other waterfalls that we didn’t quite stop for or get to see, but that just goes to show you the degree of waterfall-fatigue you could have here.

The Kaunertal Waterfalls were all seen along the Kaunertal Glacier Road, which required a toll to use.

We’ll describe the directions from Innsbruck (where we were based) to reach that road and its subsequent toll booth.

From Innsbruck, we drove west on the A12 autobahn for about 66km towards Landeck.

We then took the exit 144 (Oberinntal) where the ramp then took us south on the B180 (Reschen Straße) and the Landecker Tunnel.

Continuing south at a little over 5km from the tunnel exit, we then turned left to leave the B180 onto Obergasse in Prutz.

As we continued east towards the end of town, this road then beame Kaunertalstraße.

At around 12km from Prutz, we reached the toll station for the Kaunertal Glacier Road.

At a little over 9km from the toll station, the road climbed up to the dam holding up the Gepatsch Reservoir.

This was the landmark that I’ve used to describe where the waterfalls on this page were at.

From this spot, it was another 17km before the road reached the big car park at its end by the Weißseeferner Glacier.

Overall, I would allow about 90 minutes to make the drive from Innsbruck to the toll station.

It took us another 90 minutes to get up to the road’s end though that included a lot of stops.


Sweep checking out the Bliggbachfall and the surroundings


Comprehensive semi-circular sweep high up on the Kaunertal Glacier Road revealing the Bliggbachfall, some attractive glacier, and a pair of converging waterfalls 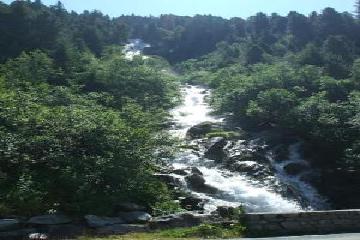 Waterfalls of the Kaunertal Glacier Road (Austria) April 7, 2012 2:57 pm by Ruth Williams - The Tyrol region of Austria is home to the Kaunertal Glacier Road. In 16miles the road winds up through 29 hairpin bends to the tongue of the Weisseeferner Glacier at an altitude of 2750m (9022ft). The alpine scenery is breathtaking with surrounding peaks well in excess of 3000m (10000ft) the glaciers form the largest single… ...Read More