The Nacimiento del Rio Cuervo (or Río Cuervo with the accent) popularly referred to the waterfall or cascada that would typically flow over a series of bush-clad travertine walls and alcoves.

Such a display would result in the kind of lacy and rivuleted curtain of water that would reveal a waterfall with “character” that Julie would like to say.

Unfortunately as you can see from the photo above, the only thing left about this waterfall were a few slivers of waterflow while the rest of it was pretty much exposed porous rock.

That was a shame because this waterfall had all the potential of being one of Spain’s best.

However, it was clear from our visit that the reliability of its flow pretty much came down to how far removed we were from the last substantial rains (and how much water that had accumulated during that time).

Technically, the nacimiento (or birth in Spanish) of the Cuervo River was actually another 40 minutes walk further upstream from what you see pictured above.

In any case, we’ve stuck by the popular notion of mixing this falls with the actual cave mouth that the river started to flow out of.

After all, I don’t think most people care about such technicalities.

In any case, the karst characteristic of the underlying porous limestone was what gave rise to the travertine formations (like what we had seen at the falls) as well as caves, such as that which resulted in the birth of the river.

Typically, we tend to think of karst scenery in places such as Southeast Asia (e.g Southern China and Thailand).

Since the falls didn’t have very good flow, we didn’t bother lingering around longer than we needed to.

Thus, we didn’t hike the extra 40 minutes in each direction to get up to the cave’s mouth at the birth of the Cuervo River.

Maybe if we’re fortunate to return next time, we might have more time and will to do it under better conditions.

This was actually one of the easier waterfalls that we managed to visit in Spain.

There was a well-defined boardwalk and trail from the well-signed and spacious car park (see directions below).

It led a mere five minutes walk beneath thin but tall trees to the lookout of the Cascada del Río Cuervo.

In addition to the well-shaded, well-defined and gentle grade of the boardwalks and steps, there was an even easier detour trail for strollers, wheelchairs, and toddlers.

Indeed, it was clear that this was one of the more family-friendly waterfalling excursions that we’ve experienced in the country.

To get to Nacimiento del Rio Cuervo from Madrid, we navigated the maze of city streets to get to the nearest on-ramp for an autovía due east.

The best autovía to take was the A-3 (Autovía del Este), which headed in a southeasterly direction before continuing east (towards Valencia).

After about 82km, we then junctioned off the A-3 for the A-40 (Autovía Castilla la Mancha), which continued to the east towards Cuenca.

We would follow the A-40 for the next 79km before heading north on the Cm-2105 road, which would twist its way into the Serranía de Cuenca mountains.

After about 58km the Cm-2105 road became the Cm-2106 (keeping left to continue going north), then after about another 7km, we’d pass through the town of Tragacete.

About 12km beyond the town of Tragacete, we then turned right at the signposted spur for the car park for the Nacimiento del Rio Cuervo (the turnoff was opposite some cafe on the left side of the Cm-2106).

After another minute or so on the turnoff, we then arrived at the large car park there.

Overall, this drive took us just under three hours.

It took roughly an hour to drive between Cuenca and the Nacimiento del Rio Cuervo.

Examining the falls in low flow with clear pools below it 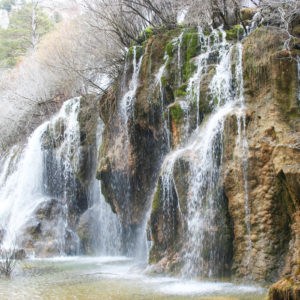 Cascada del nacimiento del Río Cuervo (Spain) January 13, 2020 5:21 am by Jose Luis Sanchez Esteban - This is a better look of this waterfall that deserves a more positive rating. ...Read More