Reichenbach Falls (also Reichenbachfall or Reichenbachfälle in German; pronounced “RHYE-khen-bahkh-fell-uh”) is perhaps best known for its association with the fictional character Sherlock Holmes

Since I haven’t really followed any of the Sir Arthur Conan Doyle novels, I didn’t quite get amount of enthusiasm devoted to the fictional events and how this waterfall related to the death of the famous sleuth.

In any case, the passion was apparent as we even noticed a Sherlock Holmes museum in the town of Meiringen as well as a plaque (in German, French, and English) near one of the waterfall overlooks in his honor!

As for the Reichenbach Falls itself, it dropped an impressively tall 250m over multiple tiers while exhibiting pretty high power when we witnessed it during our visit.

It wasn’t easy to see all the waterfall’s tiers in one go given much of the overall drop was concealed due to the twisting nature of its drop.

Therefore, I swore that the Reichenbach Falls seemed taller than its stated height for reasons I’ll divulge later in this page.

Another thing that was quite interesting about the Reichenbach Falls was that part of the waterfall seemed to have punched a hole (i.e. a natural arch) in its neighboring cliff creating a segmented effect.

It was as if the falls was shaped like a bent two-pronged pitchfork, which you might notice in the photo at the top of this page.

I didn’t recall seeing in the literature a waterfall passing through a natural arch with that much water rushing directly through it.

Thus, I wonder how much longer would the Reichenbach Falls keep this up before more of the cliff would erode and ultimately collapse that natural arch.

In theory, Reichenbach Falls was supposed to be pretty easy to visit.

A funicular ride would climb up from street level and lead right up to a viewing platform with a direct view of the waterfall.

That funicular, by the way, was first opened in 1899, which would make this a pretty historical apparatus (though the one at Giessbach Falls was said to be actually older).

Anyways, had we been able to exercise this option, I would have given this falls a 1 for difficulty.

Unfortunately, on the day that Julie and I showed up, there were very gusty easterly winds that posed too much of a risk to operate that funicular as well as other cable cars in the area.

Therefore, I wound up giving the Reichenbach Falls a 3.5 in difficulty, which I’ll explain why below.

This involved climbing to the top of the Reichenbach Falls, then descending towards the top end of the funicular station.

I started the hike by going up a trail that began on the opposite side of the funicular station, which wasn’t very well signposted.

Initially, I went up a steep road before going onto a steep trail that left the road and traversed through what seemed like a sheep paddock.

During the long ascent, I passed by one stretch of trail that skirted the dropoff besides the falls.

Given the swirling gusty winds of the day of my visit, it made that stretch very wet and misty, and thus it was very muddy and potentially treacherous.

Further up this hike to the top, there was a short spur along the cliffs to an overlook of the Reichenbach Falls.

Embedded in the cliff facing the overlook, there was a plaque talking about how Sherlock Holmes vanquished his nemesis.

I’m sure most people would have missed this spot since the funicular wouldn’t have gone by here, and only hikers willing to partake in the physical exertion would have the opportunity to come near.

Beyond this spur, the path continued to climb up a forested path before rejoining a road that passed between some accommodation and cafe.

With all this uphill walking required to get up to this point, I started to wonder whether this waterfall might be a bit taller than 250m.

In any case, I didn’t spend much time on the road because I then reached the upper entrance leading down to the Reichenbach Falls Funicular Station soon thereafter.

The path descended towards a couple of overlooks before crossing a bridge right above the main two-tiered drop of Reichenbach Falls and just below one of the smaller uppermost tiers.

A scary sign here indicated where the water level was when the stream was in flood in a past event.

Past the bridge, the path continued to descend while offering up more overlooks of the falls as well as birdseye views of Meiringen and the Alps backing the scene.

Finally, the path descended another long series of stairs before reaching the platform at the top end of the funicular.

It was at this platform where I got the best views of Reichenbach Falls as it was directly in front of the main two-tiered drop (see photo at the top of this page).

From this close-up view, I also gained a better appreciation of the hole in the cliff where the falls punched its way through.

Since the funicular was closed, it was eerily quiet except for the howling winds.

Nonetheless, since I was the only person up here, I guess having to work for this waterfall experience did have its benefits.

The bummer was that there was no direct way back down to the cafes and car park at the bottom of the funicular other than the funicular ride itself.

So that meant that I had to go back up all those steps to get to the top of the Reichenbach Falls, and then I had to descend steeply back down to the bottom of the funicular along the same zig-zagging hiking path that brought me here in the first place.

All told, the whole excursion ended up taking me about 2 hours, which included some mild trail running on the return hike so I wouldn’t keep my pregnant wife waiting too long.

I’m sure it would have taken at least 3 hours on a more relaxed visit without the funicular.

Nevertheless, with the funicular, I’m sure it would’ve been possible to experience the whole thing in about an hour or less.

There could’ve even been the option of taking the funicular to the top and then hike back down or vice versa.

That would have at least cut off a good hour or so of arduous hiking.

Reichenbach Falls resides near the town of Meiringen, which sits within the Interlaken-Oberhasli District of the Bern Canton, Switzerland. I can’t find an official governmental authority administering this waterfall. So for information or inquiries about the area as well as current conditions, you may try visiting the Bern Canton website or the Meiringen website.

Since we visited Reichenbach Falls as part of a bit of an adventurous excursion exclusively by public transportation, this is the perspective of how we’re going to describe the logistics in this section.

From Interlaken Ost, we took the train east passing through Brienz and ultimately arriving at the Meiringen Station.

This train journey takes about 45 minutes or so with all the stops.

From the Meiringen Station, we then had to walk a short distance from the train station towards a bus stop with a lot of yellow signs.

Unfortunately, the bus that goes from Meiringen to Reichenbach Falls only comes either once an hour or once every half-hour (depending on what time of day).

In any case, Julie and I just walked the 20 or 30 minutes through Meiringen to the car park for Reichenbach Falls.

There are plenty of signs pointing the way to the falls (though we had to admit that we sidetracked ourselves by mistakenly thinking the other waterfalls closer to the cable car to the north of us were the Reichenbach Falls).

Along the way, we saw the Sherlock Holmes

museum and statue as well as distant (yet attractive views) of part of Reichenbach Falls plunging before a pointy snowy mountain.

Finally, for some geographical context, the train ride from Zurich to Interlaken was about 3 hours by rail.


Top down sweep of the falls from the footbridge going across it; starting from upstream of the bridge and ending further downstream of it 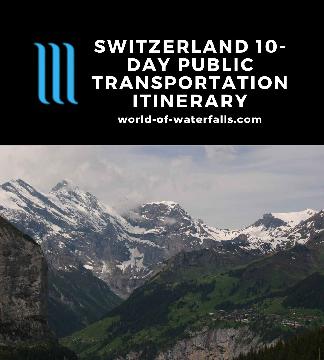 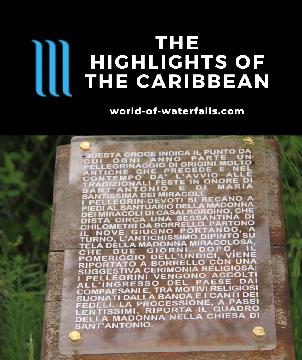