This excursion involved a boat tour on the lake that included a hike to a smaller and even more scenic lake at Obersee.

The waterfalls were merely our excuse to immersively experience the beauty of the Berchtesgaden National Park, which might be recognizable in some of the opening scenes of the Sound of Music

In any case, we bent over backwards to visit the Rothbachfall (or Roethbachfall) in particular because it was said to be the highest waterfall in Germany at 470m.

Add to that the mirror-like reflections of the Obersee fronted by a half-submerged boathouse (great subject for photographs) along with the surrounding mountains and you end up with a divine scene.

Such scenery makes me think this could very well be the most scenic part of natural Germany.

Our excursion started from a huge car park at Schönau am Königssee (see directions below).

From there, we took a short walk past some cafes and eateries towards the boat ticket office and dock right on the northern shores of Lake Konigssee (or Koenigssee).

After paying for the boat tickets, we then took an hour-long boat ride that made a stop at the St Bartholomew village and church (St Bartholomä with the umlaut).

The boat tour then made a second (and last) stop where we got off at the far southern end of the lake at Salet.

Along the way, we spotted a couple of waterfalls.

The second waterfall was the Scharinbachfall where the Schrainbach fell more voluminously into the far southwestern part of Lake Koenigssee.

This waterfall was easily visible from the dock at Salet in addition to seeing it from the boat itself.

The hike to Obersee and the view of Rothbachfall

From Salet, we then took a short 15-minute hiking trail that went south beyond the headwaters of Lake Koenigssee, where there were some restaurants along the trail.

It then crossed the Saletbach before continuing on a wide valley path until reaching the mouth of the calm Lake Obersee.

At this spot, we were able to see the iconic boat shed fronting the reflective mirror-like lake.

In addition, we could see the majestic Roethbachfall in the distance on the opposite side of the lake.

Unfortunately during our visit, we couldn’t risk missing out on the return boat ride, which was at about 6pm.

The signs suggested that hiking to the base of Rothbachfall took 1 hour and 15 minutes in each direction (or 2.5 hours round trip).

So that made it too risky to attempt as I would have started this hike at 4:30pm.

Thus, I had to be content with the views from the mouth of Lake Obersee, which I thought was good enough.

Nevertheless, I certainly would have liked to have gotten closer for a more immersive experience.

In any case, we returned the way we came, boarded a 5pm boat (they typically leave every 15-30 minutes), and by 6:30pm or so, we finally made it back to the car park.

And thus, we managed to experience the three main waterfalls in Lake Koenigssee with a minimal amount of physical exertion.

By the way, Koenigssee meant “King’s Lake”, and it was Germany’s deepest lake.

Rothbachfall and the Konigssee Waterfalls reside in the Berchtesgaden National Park near Berchtesgaden in the state of Bavaria (Bayern), Germany. It may be administered by the Berchtesgaden government. For information or inquiries about the area as well as current conditions, you can try visiting their website.

Lake Königssee was accessed from the huge car park at Schönau am Königssee.

Driving from Kehlstein to Schönau am Königssee

After about 650m, we then entered a roundabout where we took the 4th exit for the B20 towards Schönau am Königssee.

We then followed the B20 for a little over 4km to the busy car park.

Overall, this drive took us about 15-20 minutes.

Driving from Salzburg, Austria to Schönau am Königssee

We’d then drive about 10.5km on the B305 keeping right to remain on the B305 (note that going left here would lead up to Obersalzberg and the Kehlstein).

Continuing straight on the B305 for another 4.5km or so before reaching the roundabout.

At this roundabout, we’d then take the 4th exit onto the B20 and follow that road another 4km to the large car park at Schönau am Königssee.

Overall, this drive would take about 45 minutes. 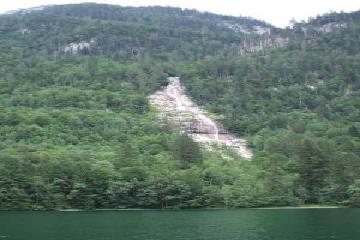 Falls of Lake Konigssee (Bavaria Germany) August 9, 2011 10:07 am by Ruth Williams - Lake Königssee is a beautiful emerald green glacial lake set in the Berchtesgaden National Park in Bavaria Southern Germany. There are three notable waterfalls in its vicinity. To see them it is necessary to take a trip on the boats that travel up and down the lake. The first fall is the Königsbach which tumbles… ...Read More