Of all the many waterfalls that we encountered between Burgos and Bilbao, Salto del Nervion (or more accurately Salto del Nervión with the accent) by far was the best performer.

Not only were we impressed with its flow, but its cliff dive into the head of a picturesque valley further added to its scenic allure.

As you can see in the photo above, this could quite possibly be the highest free-leaping waterfall in the Iberian Peninsula at 222m in height (though I’ve also seen 270m claims as well).

Moreover, the drama of the threatening weather and the gusty conditions also meant that we got to experience the falls in several different moods.

In other words, within a span of a few minutes, we managed to see the falls being blown up by the wind.

Shortly thereafter, we then saw a surprise rainbow for the brief moment that the sun came out.

Then, we witnessed the Salto del Nervion bend forwards and backwards with the swirling winds on its way down into the valley.

Furthermore, we even saw eagles soaring around the falls because there just so happened to be a nest near the spray zone of the falls!

An interesting fact about Salto del Nervion was that apparently its brink was right on the autonomous regional boundaries of Castilla y León and País Vasco (Basque Country).

That said, the popular walks were predominantly on the Castilla y León side so most of the signage was purely in Spanish.

Hiking to the Salto del Nervión

As for experiencing the Salto del Nervion Waterfall, this one made us earn it.

Indeed, we had to walk 3.2km in each direction along the PR-BU-42 path (labeled Senda Mirador Salto del Nervión) just to get to the lookout.

Fortunately, the walkway was mostly flat as it followed along what seemed like a former gravel road.

Given the wide and flat nature of the trail, I also noticed bicyclists taking advantage of the friendly terrain to reduce the time it would otherwise take to walk to the falls.

Julie, Tahia, and I also encountered some historical ruins of an 11th or 12th century monastery as well as some interesting statues and interpretive signs along the way.

So this was certainly a family-friendly excursion with enough things to maintain our interest in the moderately-long hike.

From the nearest car park to the Salto del Nervion (see directions below), we walked back along the road towards the junction right in front of the Casa del Parque.

This facility had toilets, interpretive signs, and some rest benches, but there was little in the way of such facilities on the trail so we took advantage of this.

We then followed the sign for the Senda Mirador Salto del Nervión, and it was pretty much flat and nearly straight walking for almost its entire tree-lined stretch.

Just a couple minutes from the start of this trail, we encountered the ruins of the 11th or 12th century monastery off the left side of the trail.

Nothing really caught my attention after this landmark until there were a couple of statues near a trail junction when the trees started to thin out and the scenery started to open up a bit more.

The trail then curved to the left past some shelter with a resting bench.

This path then passed by a different trail junction where a rougher path through pastures veered right into the Basque Country side of the regional border.

The waterfall path followed along the cliffs to the wide open mirador for Salto del Nervion.

This viewpoint was an overhanging platform with sweeping views down into the valley and town of Orduña (or Urduña).

It also afforded us a direct top down look at the plunge of the Salto del Nervion.

Because it was very windy when we got to the mirador, we saw that the plunging waterfall tended to bend with it.

We even saw moments where it seemed like more than half the falls was blown back up over the cliff while the rest of the falls dispersed and “disappeared” as mist before joining the Río Nervión.

By the way, the river was also known as Ria del Nervión or Ria del Bilbao in the Basque Country.

The river eventually made its way through Bilbao and into the Atlantic Ocean.

Given the exposed nature of this lookout, we were lucky that we were free of lightning strikes, but the dark clouds were definitely ready to bring weather so it was always on my mind.

After we had our fill of the waterfall, Julie and Tahia headed back to the car, where they ultimately spent about 100 minutes away from the car.

Meanwhile, I extended the excursion by going on that rough path branching from the main trail into the Basque Country from near the shelter.

Once I got on there, I could see that this trail used to be a 4wd road probably for ranchers to tend to the horses and cows that I saw still grazing on the land.

I’d eventually get off the dirt road and scramble on a faint trail-of-use that crossed the shallow Río Nervión well upstream from the falls.

Then, the scramble ascended to a semi-grassy area with bush clumps spread out that hugged the brink of the cliffs.

There were wire fences set along the edges of the cliffs though some parts seemed to have been knocked down.

After about 15 minutes, I finally got to an alternate view where I was able to look straight down into the valley with the Salto del Nervion framing the left side.

I didn’t have time to keep walking along the cliffs for different angles of the panorama.

However, I did recall seeing in the literature that one could scramble all the way to the opposite side of the gorge for a direct view of the plunge of Salto del Nervion.

Certainly, I could’ve spent a lot more time here, but we still had a long drive to San Sebastián ahead of us, and I still had to walk back to the car park where Julie and Tahia would surely be waiting for me.

In the end, I wound up spending about 2 hours away from the car, which included the extended side excursion to one of the alternate views of Salto del Nervion and the valley together.

On the way back, the storm eventually produced some on-and-off rain so it was a good thing that we came prepared with a rain poncho.

That said, its effectiveness was limited around the mirador when the wind tended to make the poncho do a Marilyn Monroe and blow it upwards.

We visited Salto del Nervion after visiting the Cascada de Gujuli, which itself was about 20 minutes drive south of Bilbao.

So we’ll pick up the driving directions from that waterfall.

As for directions to the Cascada de Gujuli, see the directions on that page.

From the Cascada de Gujuli, we continued driving west on the A-2521, which descended steeply into the valley as the road ultimately junctioned with A-625 and BU-556 (or A-2625) in the town of Orduña after 11km.

We then turned left onto the BU-556 (or A-2625) and followed this road back up the other side of the steep cliffs of the valley before reaching the turnoff for the Monte Santiago Nature Park to the left after about 10.5km.

At this point, we were driving on an unpaved gravel road with a few potholes here and there.

We would eventually take this road for about 3km as we would ultimately end up at the car park that was probably nearest to the Casa del Parque, which was also the official start of the trail to the mirador for Salto del Nervion.

Overall, this drive took us about 30 minutes from Cascada de Gujuli to the car park closest to Salto del Nervión (so it’s probably just under an hour’s drive from Bilbao).

Looking down at the impressive waterfall from its mirador 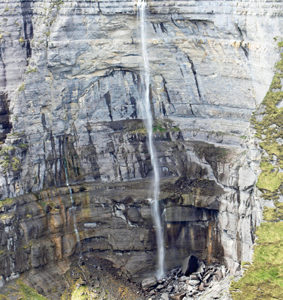 Cascada del Nervión (Spain) January 13, 2020 9:03 pm by Jose Luis Sanchez Esteban - Two frontal views of this waterfall, with a height of 223 m is the highest in Spain and one of the highest in Europe. Unfortunately, it only can be seen in all its splendor after heavy rains. Here only falls a part of its total lenght. The third photo was taken from a different view… ...Read More