It was an impressively tall waterfall fronted by the reflective Bodensee Lake, which turned out to be only the lowest out of three lakes.

As you can see from the photo above, this waterfall was really more about the lakeside scenery while the waterfall acted more like a scenic backdrop.

By the way, they had to put the Steirischer (Styrian) in front of the name Bodensee because there was a much larger Bodensee (Lake Constance) way over by the border with Germany and Switzerland.

I think it’s because the Styrian version of the lake was smaller and more intimate that the lake possessed a more mirror-like quality in addition to being a much quieter alpine experience.

From the car park by the Seewigtal Stüberl, I then followed a well-used trail that led right past the cafe.

Beyond the cafe, I then hiked roughly 25 minutes along paved path as it gently followed the Bodenseeweg alongside the Seewigtalbach.

This stretch went for about 700m as it slowly revealed parts of the Steirischer Bodensee Waterfall en route.

Eventually, the pavement ended right at the mouth of the beautiful Steirischer Bodensee Lake.

At the mouth of the lake, there was a trout farm as well as another accommodation or cafe called the Gasthof Forellenhof.

While the views from here were very captivating and compelled me to linger for quite a while trying to figure out how best to compose several photos of the scene, I also took the time to get closer to the waterfall.

At this point, I had a choice of direction to take since there was a loop trail that went completely around the lake.

The continuation to the Steirischer Bodensee Waterfall was at the exact opposite end of the lake so there wasn’t any advantage of going one way or the other.

I opted to keep right and walk the loop in a counterclockwise manner.

So after another 750m or so of walking around the western shore of the lake (taking me another 25 minutes or so), I reached the junction at the far end of the lake.

Along the way, I noticed that there was some degree of sedimentation on the lake as it transformed from a body of water to a swamp and then ultimately to a muddy area at its head.

That made me wonder if this lake’s eventual future would be a meadow in much the same way that Mirror Lake in Yosemite National Park wound up becoming in the drier Summer months.

In any case, I continued on from there as the path now started climbing in earnest.

After going up a series of inclines and switchbacks, the path degenerated more into a narrower series of switchbacks with some mild degree of hiking between large boulders.

After another 500m or so of the pretty tiring uphill climb, I finally reached the base of the Steirischer Bodensee Waterfall.

It took me a little over an hour to get here from the car park.

While the falls looked shorter from this up close, I was able to feel some of the refreshing light spray while also glimpsing the lake and Seewigtal Valley from a different and more elevated perspective.

This was my turnaround point though it was apparently possible to continue on with this hike towards the other higher alpine lakes and huts (and likely more waterfalls).

On the return hike, I opted to take the trail going over the bridge spanning a pair of converging streams to complete the loop.

This section of the hike put me back towards the mouth of the Steirishcer Bodensee Lake in an 800m stretch from the junction at the head of the lake.

By the time I made it back to the car park, I wound up hiking a total of around 4km, and I spent about 2 hours away from the car.

The Steirischer Bodensee Waterfall resides near the town of Schladming in the state of Styria (Steiermark), Austria. It may be administered by the Schladming government. For information or inquiries about the area as well as current conditions, you can try visiting their website.

I’ll describe how I did this drive from Salzburg since that was my base for doing this excursion, even though it wasn’t the closest starting point.

Then, I’ll describe the inland route both from Haus im Ennstal as well as from Aich.

Driving from Salzburg to the Steirischer Bodensee

From Salzburg, I made my way south from the city center along the B150 to the A10 autobahn further to the south of the city.

After exiting the A10 and going on the B320, I then followed this road for another 32km towards the town of Haus im Ennstal.

Then, I took an exit at Ruperting (roughly 9km east of Schladming).

Once on the local streets, I headed south towards a four-way intersection and turned left onto Höhenfeldweg II.

I then followed this road east as I kept right onto Petersbergweg and continued on for 2km before keeping left onto the Seewigtal Road.

Overall, this drive would take about a pretty solid 90 minutes.

Driving from Aich to the Steirischer Bodensee

If I wanted to take a slightly longer approach, I could have also continued on the B320 for 2km to the exit onto Gössenbergstraße at the town of Aich.

Once off that ramp, I’d continue on the road and keep right at the intersection to remain on Gössenbergstraße / Gössenbergweg eventually becoming the Seewigtal Straße.

The car park for Steirischer Bodensee was roughly 6km from Aich.

And like the western approach, there was a toll station not far into the Gössenbergstraße. 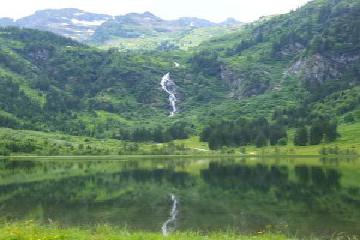 Steirische Bodensee Waterfall (Austria) February 1, 2015 3:53 pm by Ruth Williams - The Steirische Bodensee Lake is an Alpine jewel set at 1,143 m (3750ft) in the Dachstein Mountains not far from the ski resort of Schladming. The waterfall is the backdrop to the valley and is beautifully reflected in the crystal clear water. An easy walk can be made around the lake or extended with a… ...Read More