Stuibenfall (or Stuiben Falls) was said to be Tirol’s biggest (and tallest) waterfall.

Such a tall waterfall like this having the volume that it did during my visit was pretty special.

However, what really made the experience memorable and over-the-top, was the hiking trail.

The Stuibenfall Trail involved crossing a very high and bouncy suspension bridge with the kind of views of the Stuibenfall that would typically be reserved for only birds, and drones.

On the other side of the bridge were a pair of spiral stair towers before ultimately reaching another bridge across the brink of the falls featuring a pair of natural bridges!

Given all the things that the Stuibenfall had going for it, I’d even argue that it was as scenic as the very well-known Krimml Waterfalls.

This was especially the case since Stuibenfall was more of a singular waterfall entity as opposed to a series of disjoint waterfalls that characterized the Krimml Waterfalls.

Plus, I felt like I had a very interactive experience with the Stuibenfall as the trail was always in close proximity to the waterfall’s main plunge (with the exception of the beginning when I had to walk up to the falls).

Despite the Stuibenfall hike being about 2.4km in each direction (or 4.8km round trip), there were always lots of people throughout the hike.

Without question this was a very popular hike, especially since they opened up the thrilling parts of the trail in April 2016 following a rockslide that made the waterfall inaccessible in 2013.

Overall, it took me about 3 hours away from the car to fully experience the falls.

That said, I suppose it could be as little as 2.5 hours round trip if I didn’t make as many stops as I did.

I began from the well-signed and very popular trailhead parking just on the outskirts of the town of Umhausen (see directions below).

After paying for parking and walking past the Naturbadesee, I then found myself on a pretty wide trail that also seemed to double as an unpaved road.

By the way, the Naturbadesee was basically a developed swimming area that was the perfect relief from the Summer heat during my July 2018 visit.

Since I made my visit in the afternoon, much of this part of the trail was shaded.

Along the way, there was a Greifvogelpark (or an Eagle Park) as well as a cantina called the Waldcafe Stuböbele, which featured a little mill in front of it.

Beyond the cantina, the trail crossed a bridge over the Horlachbach before resuming the uphill climb alongside the creek towards the first of a handful of lookouts taking in the Stuibenfall.

It took me around an hour to get here from the car park.

From that first lookout, I could already see the suspension bridge, which beckoned me to do a little more hiking to see what it was like up there.

Meanwhile, the bottom drop of the Stuibenfall was revealed.

And while a lot of people turned back at this point (which made the hike about 3.6km round trip), it was a good thing I kept going on because little did I realize that there would be more waterfall tiers further upstream.

Next, the Stuibenfall Trail then climbed up a series of switchbacks.

The first two signed waterfall lookout platforms were in this fairly long stretch.

However, it was from the second lookout and beyond that I finally got to appreciate the entirety of the Stuibenfall as its uppermost drops were revealed.

A short distance after the second labeled waterfall lookout, I then ascended to the start of the suspension bridge.

As stated earlier, this bridge was bouncy, especially when lots of people were on it at the same time.

Sometimes, you could have a clown or troll or two intentionally bouncing or jumping on the bridge in order to make the bridge rocking and rolling.

The bridge generally went uphill and was about 80m long.

Just on the other side of the bridge, the footing was sturdier as it passed by the third waterfall platform.

This platform was roughly 20 minutes from the busy area near the first lookout platform or “Stuibenfallblick”, which was being blasted with Stuibenfall’s mist.

After ascending the first tower (Stuibenturm 1), I reached the fourth viewing platform.

At this lookout, I was right next to the profile of the upper drop of Stuibenfall.

The light spray from here felt refreshing after all the climbing that I did up to this point.

However, there was still more climbing to go, and a large chunk of it was on the second of the squared spiral towers (Stuibenturm 2).

Stuibenfall Trail Description – hiking to the brink of the waterfall

Once at the top of the towers, the trail was back to the more conventional dirt surface as it made its way towards a fork.

The right fork went towards Niederthai while the left fork crossed a bridge right over the brink of the Stuibenfall.

From this bridge, I was able to look at some smaller drops of the waterfall as the Horlachbach flowed beneath a natural bridge.

That said, as I looked downstream from this bridge, it was over the brink of another relatively small drop before the creek went beneath a more pronounced natural bridge.

Beyond this footbridge, the path then reached another junction, where I continued on the left to make the final descent towards the fifth viewing platform (Aussichtsplatform 5).

This was where I was able to look back towards the natural bridge (where some climbers walked on a wire rope attached to it).

At the same time, I could also look downstream towards the main drops of the Stuibenfall in a pretty dizzying and disorienting view.

The signage suggested it was 45 minutes from the main viewing area though I probably took a bit longer than that given all the stops I had made.

Stuibenfall resides near Umhausen in the state of Tyrol (Tirol), Austria. It may be administered by Urkraft Umhausen. For information or inquiries about the area as well as current conditions, you can try visiting their website.

Stuibenfall sat within the Ötztal Valley by the town of Umhausen.

Since we drove here from both Innsbruck and Landeck, I’ll describe the driving directions in this section from both locations.

Driving from Innsbruck to Stuibenfall

From Innsbruck, we drove west on the A12 autobahn for about 46km towards the exit 123 towards Ötztal.

This exit took us onto the B186 (Ötztal Straße), which we followed for about 14km into the town of Umhausen.

We then followed the signs which led us away from the B186 and onto Dorf, which then became Niederthaier Straße.

Next, we followed this street through the town as we ultimately reached the Bischofsplatz Car Park (roughly 1.3km from where we left the B186 onto Dorf).

Overall, this drive took us about an hour.

While visiting the Stuibenfall was free, the parking was 4.5 euros for the day (as of our visit in July 2018).

Driving from Landeck to Stuibenfall

From Landeck, we’d drove east on the A12 autobahn for about 21km to the exit 123 (Haiming/Ötztal).

Once we were off the A12 and onto the B186, we then followed the directions as given above towards Umhausen and ultimately to the Parkplatz Bischofsplatz.

This drive took us under an hour.


Sweep covering the Stuibenfall from the bouncy suspension bridge 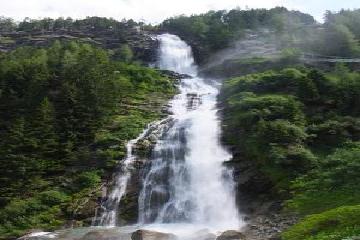 Stuibenfall (Austria) October 9, 2017 4:59 pm by Ruth Williams - The powerful Stuibenfall can be found in the Tyrol region of Austria near the village of Umhausen. The Horlachbach stream plunges 159 meters into the valley in a cascade of spray which gives the fall its name. We were also lucky to see some beautiful rainbows. There is a car park just outside the village… ...Read More