The Walcher Waterfall (Walcherfall) was an impressively tall series of cascades tumbling down a mountainside very close to the toll booths for the Grossglockner High Alpine Road at Ferleiten.

According to the maps, this was where the Walcher Bach tumbled a reported 520m down several disjoint cascades.

If they’re counted together, it’s possible that this could very well be Austria’s highest waterfall by cumulative height.

However, it’s a bit subjective to consider whether this stringy but seemingly consistent-flowing cascade ought to be considered as such.

In any case, this waterfall was kind of obscure from the standpoint that it didn’t appear to be mentioned by name on any of the maps we came across.

This included the Grossglockner fold-out that they handed out to us once we paid the hefty 36 euro toll (as of July 2018) to go onto the famous high alpine road.

Fortunately for this waterfall, I didn’t need to pay that hefty toll since it could be seen before reaching the toll stations.

I did notice that this waterfall could also be referred to as the Schleierfall (a seemingly popular name amongst German and Austrian waterfalls as I believe it means “Bridal Veil Falls”).

The Walcher Waterfall was essentially a roadside attraction as I found the views were best from the road.

After all, this was where the cross-valley view yielded the most contextual look at the entirety of all the cascades comprising the waterfall.

That said, there wasn’t an official or sanctioned pullout conveniently yielding the best roadside view.

Instead, I had to walk carefully along the road until I spotted openings between the obstructing trees to get the best views.

It was also possible to park in one of the parking spaces further down the road at Ferleiten.

However, all that yielded me was a closer look at the falls, which appeared smaller as the forced perspective of the slopes supporting the falls obstructed chunks of it.

To make matters worse, I believe the trail to climb up alongside the Walcher Waterfall was closed indefinitely because of the high exposure to dropoffs combined with the rockfall danger.

There must have been evidence of geological instability as well as fatalities for the authorities to be erecting stern warnings suggesting an unnecessary risk to life if one were to attempt it.

I was only able to get as far as a junction in the trail, where some construction work was being done, and even that access trail was closed during work hours, which was pretty much all the daylight hours.

Maybe one day, they may re-open the trail alongside the Walcher Waterfalls, but it certainly doesn’t seem like the risk versus reward was there to justify such an undertaking.

The Walcher Waterfall resides in the town of Fusch an der Grossglockner in the state of Carinthia (Kärnten), Austria. It may be administered by the Fusch government. For information or inquiries about the area as well as current conditions, you can try visiting their website.

To access the Walcher Waterfall (or at least the viewpoints), you only need to drive to Ferleiten if coming in from the north.

That’s how we did it from Zell am See, and that’s how I’ll describe the driving directions in this section.

From the center of Zell am See, I drove south on the Brucker Bundestraße as it entered some tunnels leading me onto the B311 going south.

While on the Glocknerstraße, I then headed south for about 13km to a pullout with a little relaxing area on the right.

From this spot, it was possible to leave the car and walk carefully along the Grossglockner Road until the views across the valley improve.

Alternatively, it’s possible to continue driving for another 500m to the parking spots in the hamlet of Ferleiten just before the toll stations.

While most of the parking here was for the animal park and the guesthouses here, there might be a chance that a spot would be available to get out and go for a short walk to improve the views.

In any case, this 20km drive would take under 30 minutes. 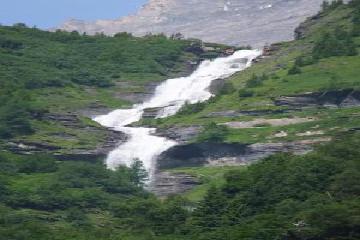 Walcher Waterfall (Austria) April 10, 2016 3:00 pm by Ruth Williams - The beautiful Walcher waterfall for some reason does not receive a lot of publicity and yet it is one of the tallest in Austria. The Walcherbach stream cascades down the mountain in five main falls for about 520 meters. It is situated near the village of Ferleiten near the toll booths to the Grossglockner High… ...Read More