Hiilawe Falls (or Hi’ilawe Falls) was one of those waterfalls where it seemed it had a reputation that it can no longer live up to.

What I mean by this is that it was once one of the tallest and mightiest waterfalls in all the islands of Hawai’i with its often quoted cumulative height of 1,450ft.

It certainly seemed like the crown jewel of the sacred Waipio Valley (or Waipi’o Valley), which is the easternmost of the Kohala Coast valleys on the northeast shores of the Big Island.

However, this waterfall seemed to go dry pretty quickly, which I realized firsthand when it was dry (for all intents and purposes) on our first visit in March 2007.

Then, it was flowing but not very impressively only three weeks after saturation rains caused massive flooding on the Big Island in February 2008.

Even though Waipi’o Valley is supposed to get over 80 inches of rain per year, I suspect the reason for the lack of reliable flow over Hiilawe Falls is the presence of the Hamakua Ditch.

The ditch apparently diverts the flow of the water to support cultivation (e.g. taro, banana, and coconut I believe) as well as for flood control.

That as well as other smaller ditches further upstream of Waipi’o Valley seemed to have robbed this falls (and other waterfalls in the valley) of their water.

So the bottom line is that this falls is probably not worth the trouble of going down into Waipi’o Valley unless you’ve managed to time your visit appropriately.

For seeing it during rain (which likely results in clouds blocking your view) or shortly after heavy rain under clearing skies would be when the falls likely would flow.

Under such conditions, you might even be able to see a twin waterfall called Hakalaoa Falls flow.

However, both times I’ve been in Waipi’o Valley, Hakalaoa Falls wasn’t flowing for all intents and purposes.

I had read that “Waipi’o” apparently means “curving water.”

I’m not quite sure what that would be referring to, but from looking at the photos on this page, perhaps it might be referring to the waterfall’s curved trajectory.

I had also read that Waipi’o Valley has seen its share of turmoil.

It’s hard to believe that the valley once supported hundreds of residents in addition to being the boyhood home of King Kamehameha (the king credited with unifying the Hawaiian Islands).

However, tsunamis (especially a particularly destructive one in 1946) and modern life beckoning above the valley reduced the population here to about 50 or so residents.

It’s been said that these residents are disconnected from the power grid, but I’m not so sure about that assertion as I saw power lines going into the valley.

Anyways as for visiting Hiilawe Falls, we did it two ways.

The first way was by independently walking into Waipi’o Valley down a very steep access road.

Even though that road was paved, it was steep enough to require four-wheel drive to ensure the brakes don’t fail and to help with the traction on the slippery surface of the road.

So while the 1/4-mile walk into the valley was fairly straightforward going down, it was a real ass kicker on the way back up.

From what I understand, local residents in the valley don’t like tourists driving down (it’s mostly private property down there apparently).

There were even locals at the Waipi’o Lookout at the top of the road making sure no tourist foolishly drove down in an ill-equipped vehicle.

Once we made it to the bottom of the road, we proceeded to walk further into the valley straight past the junction until we got a view of Hiilawe Falls.

I understand that any further progress beyond the views that you see on this page would constitute trespassing so we never ventured further on our own.

), but again, I understand that area was private so we didn’t bother.

Experiencing Hi’ilawe Falls on a Tour

The second way we saw Hiilawe Falls was by doing a horseback riding tour of Waipio Valley.

This was one of the more unusual things Julie and I have ever done to tour a scenic place, but somehow it seemed like a pretty fun way to experience this legendary and mysterious valley.

Neither Julie nor I were experienced with riding horses, but it turned out that the horses here were well-trained and we were able to control the horses with the simple instructions given to us by our guides.

The only real inconveniences of this tour were taking spur-of-the-moment photographs and sore bums.

It turned out that taking photographs was not easy on a trotting horse.

In fact, the tour stopped only in particular spots either to wait for everyone to catch up or at the turnaround point where we went as far into the valley as the tour would go.

As for the sore bums, we did find ourselves riding on the horses for almost a couple of hours, I think.

So over time the hard saddles made for uncomfortable sitting while our bums would repeatedly bounce on it as the horses trotted or galloped.

Even though Hiilawe Falls wasn’t an official stop for the horseback riding tour, the 4wd van that took us into the valley took the road that passed before the falls.

Our driver at first wouldn’t stop for the falls, but later changed his mind and borrowed my camera to take photos for me.

So perhaps if you do this tour, you may or may not be able view the falls and take your own photos.

Hi’ilawe Falls resides on the Big Island of Hawaii. As far as I know, it is not administered by any official authority, but accessing its base involves crossing through private property. For information or inquiries about the general area as well as current conditions, you may want to try visiting the Department of Land and Natural Resources (DLNR) website.

From the Hwy 19 and Hwy 11 junction by the Hilo Airport in Hilo, drive north on Hwy 19 for 43 miles (60 minutes) to Hwy 240. Turn right onto Hwy 240 then follow it through Honoka’a Town and then go another nine miles (15 more minutes) to its end at the Waipi’o Valley Lookout car park.

From Waimea, drive east on Hwy 19 for about 15 miles (taking under 30 minutes) to Honoka’a Town. Then, turn left to go onto Hwy 240 and follow this road to its end some 9 miles later as stated above.

As mentioned earlier on the page, if you want to go into Waipi’o Valley, you’ll need to walk (make sure you’ve brought plenty of water, snacks, and allowed yourself plenty of time – like 2 or more hours to really take your time). That road isn’t easy!

Hiilawe Falls August 3 August 3, 2014 8:22 am by Claire - We visited Hawaii for a week. My family and I hiked to the waterfall and we were amazed! We were told that the falls didn't really flow, but they did. Both Hiilawe and Hakalaoa Falls were flowing, with quite some water, but it didn't rain in the past few days. In fact, we actually could… ...Read More 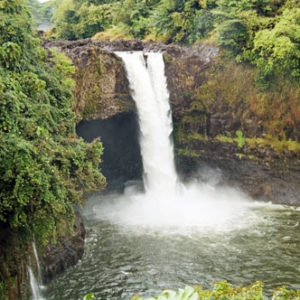 Rainbow Falls, Hi’ilawe Falls, and Waimoku Falls February 21, 2019 8:45 pm by Mandy BUlar - A standout amongst the most effectively open cascades on the Big Island, Rainbow Falls is only a brisk five-minute drive from downtown Hilo. On bright days, rainbows show up in the fog of the 80-foot falls, making for some entirely otherworldly perspectives. Rainbow Falls is a standout amongst Hawaiʻi's most notorious cascades. The falls is… ...Read More