Hipuapua Falls is the other of two major waterfalls at the head of Halawa Valley.

So far, we have only been able to satisfactorily view this gorgeous 500ft waterfall from the air.

We were hoping to see this from the ground, but we were told by the folks running the Halawa Valley Cultural tour that it was much harder to hike there than to Moa’ula Falls.

Given that it was more of an “intense” experience involving stream hiking and awkward boulder scrambles (as described by the guide), the flash flood danger was too great when undertaken in the Wet Season.

Now I understand that in the past, they have led people to this waterfall, which would be something I’d look forward to.

However, they would only consider doing it during the Summer when the flash flood danger is relatively low.

And like the Moa’ula Falls hike, it crosses through private property (so the tour would be necessary) and that it would be a 4.5-mile round trip hike.

If we were to do a combo hike involving this waterfall and Moa’ula Falls, I’d imagine the tour would go longer into the afternoon since Hipuapua Falls would be on a separate spur trail.

So given that we couldn’t get close to this waterfall, we were able to get distant views of the falls as we self-drive into Halawa Valley from the overlook.

Moreover, we could see the falls from various angles on a helicopter tour of West Maui and Molokai.

Hipuapua Falls resides on private property on the island of Molokai, Hawaii. Since I generally don’t keep up with ownership situations, you may have to either go there and read the signs or contact someone beforehand. For information or inquiries about the general area as well as current conditions, you may want to try visiting the Department of Land and Natural Resources (DLNR) website.

The would-be hike to this falls shares the same excursion as that of Moa’ula Falls. So see that page for directions. We’ve managed to do this by doing a day trip from O’ahu, renting a car in Moloka’i, then returning to the airport when all the land touring was done.

As for helicopter tour directions, we’ll punt you over to the Honokohau Falls page since the tours start from the airport area in Central Maui. The drive from the resorts in West Maui like say Lahaina to the airport at Kahului would be about 45 minutes. 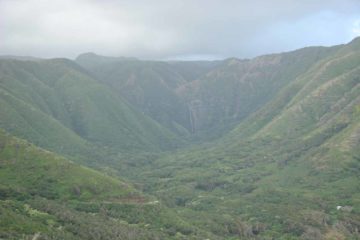