Kulaniapia Falls is a private 80-100ft waterfall (the height is just a guess) on the Waiau Stream situated on the lower slopes of Mauna Kea not far from Hilo.

According to the owner Lenny, the film crew for “Indiana Jones and the Kingdom of the Crystal Skull

” actually came over to his property to film the waterfall.

After seeing a made-for-TV re-run of the movie, I didn’t recall seeing this waterfall appear in it.

But then again, it could’ve made an appearance only in the full screen version as opposed to the made-for-TV version.

I’d imagine that it would have been the very first waterfall that the main characters tumbled over before going over the Devil’s Throat of Iguazu Falls.

Anyways, we found Kulaniapia Falls to be one of the more attractive waterfalls that we’ve seen on the Big Island.

We also felt the Asian-themed accommodation nearby the falls suited us as a nice place to relax and sleep to the sound of the falling water (as long as the mosquitos didn’t bother us).

On our first visit, we had to hunker down during a real soggy and unusually drenching Super Bowl XLII weekend storm in February 2008.

On that eventful day, the heavy rain swelled the stream and made the waterfall appear menacing.

Therefore, we came back for a second visit nearly a month later to experience the falls in a more normal state.

From the Inn, we had to walk around the property on grass (on the car park side) before finding the descending trail to waterfall’s base.

The path passed beneath the balcony of the Inn with the waterfall clearly in sight practically the entire way.

We were told that Lenny worked real hard (along with hired assistance) to clear that path as jungle once completely the entire area around the stream.

In addition to the convenient access to the base of the waterfall, apparently the falls also provided localized hydro power for some of the electricity on site.

Moreover, I noticed a bamboo garden further downstream from the inn though we never really got a chance to experience it.

I guess one of these days, we’ll make a return visit and see the rest of Lenny’s work.

As mentioned earlier, Kulaniapia Falls is on private property and is not open to the general public. If you would like to visit the falls, please visit www.waterfall.net to book a waterfall rappelling adventure or to reserve a room.

Guests without reservations will be turned away (something they’ve had to do more frequently in recent years).

Finding the Inn at Kulaniapia Falls isn’t easy without directions.

Once after making a booking did we receive detailed driving directions.

In any case, we’ll try to provide directions here in case you lose them.

From the Hwy 19/Waianuenue Ave junction in downtown Hilo, drive west (mauka) on Waianuenue Ave for a block to the one-way Keawe St.

Turn right onto Keawe St and look for Ohai St just past the bridge over the Wailuku River.

Turn left onto the narrow Ohai St then go straight past Wainaku St as Ohai St narrows even more and becomes Amau’ulu Rd.

As you continue going west on Amau’ulu Rd for about a mile, you’ll start to see Kulaniapia Falls signs indicating that indeed you’ve headed the right way.

The first sign is at Maikalani St, where you turn left.

Follow Maikalani St for a little over 2 miles to a three-way junction with Pu’ueo Mauka Dr (and another sign for the falls).

Turn left at this junction and follow the curving road south for a little over a half-mile before turning left again at another three-way intersection and sign.

About a third of a mile east of the intersection, you’ll be at the Inn.

There is a car park for guests just beyond the main building’s canopy.

To give you some context, Hilo was about 76 miles (90 minutes drive) via the Saddle Road. If you take the longer way via Waimea, then this drive would be 96 miles (under 2.5 hours drive). From Waikoloa, the drive to Hilo via Hwy 19 through Waimea would be about 75 miles (under 2 hours drive).

Right to left sweep from the balcony 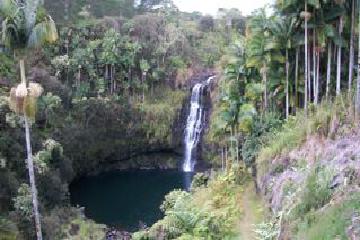 Kulaniapia Falls March 7, 2010 10:46 pm by Mark Lindberg - Private, Serene, and Magical. Our pick for the most beautiful waterfall on the Big Island. ...Read More