Laie Falls (or La’ie Falls) is a small 15ft waterfall that had very light flow when I was there on a warm and sunny March day in 2007.

When I did the trail to the falls, it was on private property managed by Hawaii Reserves, Inc.

Thus, prior to starting the hike, I needed to secure a permit, which was issued from their office in the La’ie Shopping Center.

While I was there, I basically just needed to sign and carry the permit with minimal hassle.

As for the waterfall itself, I noticed there were actually more small cascades downstream from where the trail to the falls stopped.

So I suppose the falls can possibly tumble a total of 30ft or more if you want to be technical about it.

Regarding the hike, it required a fairly lengthy 6 miles or so round trip to get to the falls with some 1,200ft of elevation gain.

The sign said it was 90 minutes each way to the falls, but I swore it took me more like 2 hours each way.

The hike resulted in a lot of sore muscles and sweat because it was relentlessly uphill almost the entire way there.

For such a small waterfall, it seemed like an awful lot of trouble for it.

But the hike was peaceful, and it did feature a variety of terrains and attractions such as eroded 4wd paths, Cook pine trees (which seemed out-of-place in Hawaii), strawberry guava trees, and lovely views of La’ie and the ocean.

Hiking to La’ie Falls from the trailhead to the spur

From the start of the hike (see directions below), the first major La’ie Trail junction was about 5 minutes from the trailhead.

This stretch started with a bit of walking on sealed roads before even reaching the trailhead.

Then, I kept left at the junction to avoid entering Scrambling Hill, which was a large dirt mound leftover from an unsuccessful attempt at building the Temple View Apartments.

Thereafter, to stay on the La’ie Trail, I ignored the (lesser-used) paths on the left and kept straight ahead.

After the Scrambling Hill junction, the La’ie Trail was on a 4wd road.

Over the next mile, the slightly eroded road alternated between wide open fields and groves of introduced trees providing limited shade.

Towards the end of this stretch, the trail entered a wide open area with a dilapidated wire fence.

At this point, the trail became heavily eroded, with gullies making for areas with precarious footing.

The La’ie Trail briefly followed the fence, then veered away, with refreshing views of the ocean and La’ie.

Ignoring a spur trail to the right, I continued along the eroded 4wd La’ie Trail as it curved around a hill and narrowed into a foot trail.

At the next trail junction (uphill; on the mauka side), I turned right.

Within a few minutes, the La’ie Trail entered a grove of Cook pine trees introduced for reforestation in 1929 by Territorial Forestry.

The pines, which looked more alpine than tropical, were roughly an hour away from the trailhead.

The La’ie Trail briefly dipped downhill and then resumed its climb out of the pines into an extensive twisted canopy of strawberry guava trees.

Within about another half hour (90-120 minutes from the trailhead) was another junction.

The final spur and approach to La’ie Falls

This time there were pink ribbons pointing to a spur trail on the right ultimately leading to La’ie Falls via a steep, slippery, and narrow descent towards the Kahawainui Stream.

The 10-minute spur path to the falls was actually at about the halfway point of the longer (6 miles one-way) La’ie Ridge hike.

Though short, the narrow spur path to the falls was a slippery, muddy descent (and return ascent) with ropes to grab for support.

La’ie Falls resides on the island of Oahu, Hawaii. As far as I know, it involved crossing through private property. That said, the falls itself didn’t appear to be administered by any official authority. For information or inquiries about the general area as well as current conditions, you may want to try visiting the Department of Land and Natural Resources (DLNR) website.

Just north of the Polynesian Cultural Center in La’ie (on Hwy 83), stop in the La’ie Shopping Center (Foodland supermarket), which houses the Hawaii Reserves, Inc. office issuing permits for the La’ie Ridge and La’ie Falls hikes.

From the La’ie Shopping Center, continue north on Hwy 83 for just under half a mile (roughly four blocks long) until you see the small street called Naniloa Loop on the left. Turn left onto Naniloa Lp, and take the second exit on the roundabout (Po’ohaili St). Park in one of the public spaces adjacent to La’ie Park. Beyond La’ie Park, the road is private and unavailable for parking. You’ll have to walk this stretch before getting to the official trailhead.

For context, the town of La’ie is 36 miles (90 minutes drive) north of Waikiki Beach. 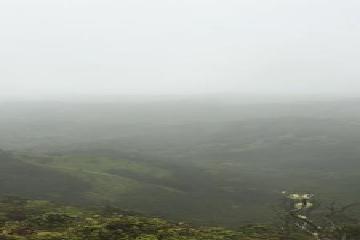 Wheww (Laie Falls) June 4, 2015 8:16 am by Sterling - Very rainy in June , seemed longer than 3miles up three down . Slippery footing and mosquitoes galore . A lot of work for a small falls . The summit was nicer , however the view was impeded by cloud cover. ...Read More