Opaekaa Falls (or Opaeka’a Falls) is a segmented waterfall said to tumble at a height of 151ft.

This waterfall was real easy to see from a distance because it had an official overlook and car park that was well signposted.

It was also not far from the town of Kapaa (or Kapa’a).

Thus, we definitely shared this overlook with many other tourists as it was a very popular stop.

I believe “Opaeka’a” means “rolling shrimp” probably because there used to be the rare native shrimp in the freshwater streams here.

These shrimp were known to be able to climb cliffs containing waterfalls such as this one.

The Temptation to improve the Opaeka’a Falls View

Now even though the overlook was very popular and busy, it left a lot to be desired.

This was due to its very distant and partially obstructed view thanks to a tree that covered up a good chunk of the falls.

Thus, it posed a dilemma as to whether we should seek out a way to get closer to the waterfall or be content with this view that bordered on disappointing.

Well, it turned out that there were paths to the base of the waterfall.

However, one of them was very dangerous as a pair of ladies who made the attempt had died just before we arrived.

As you can tell from the dearth of photos on this page, we decided against chancing it.

Meanwhile, the other path along the Opaeka’a Stream went through state land that was leased to a private company so it would be considered trespassing to go this route.

We learned about this route from a friendly kama’aina at the Kamokila Hawaiian Village.

So admittedly, it was word-of-mouth and something we weren’t in a position to substantiate.

Opaekaa Falls resides in Wailua River State Park in the island of Kauai, Hawaii. For information or inquiries about the general area as well as current conditions, you may want to try visiting the Department of Land and Natural Resources (DLNR) website.

From downtown Kapa’a, head south on Hwy 56 for about a mile. Just before the Wailua River Bridge, turn right (heading west or inland) onto Hwy 580 (Kuamo’o Road). Watch for the Opaekaa Falls sign at the junction of Hwy 580 and 56. The signed car park for the ‘Opaeka’a Falls Lookout is a little over a mile from the junction.

From Lihu’e, go about 6 miles north towards Kapa’a, crossing the Wailua River Bridge. Turn left after the bridge and head west on Hwy 580 for a little over a mile to the car park. 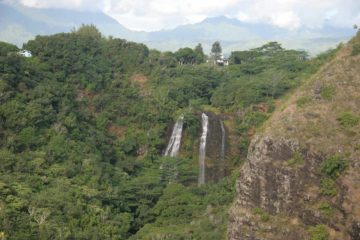