Papalaua Falls is an impressive 1200ft waterfall (though I have seen one claim it’s 1700ft) sitting on the rugged and steep north shore of Molokai.

I’ve been on two different helicopter rides over a span of four years that have visited this particular waterfall. So that seems to suggest that this one can be reliably seen.

And of course it doesn’t hurt that it’s just a spectacular and breathtaking waterfall. It’s certainly one of my favorites in all the Hawaiian Islands.

There has been a bit of misinformation floating around, and I witnessed this firsthand when our latest helicopter tour over West Maui and Molokai perpetuated false claims that this is Kahiwa Falls.

I knew this wasn’t correct based on the topo maps

, but I have to wonder how many other unsubstantiated claims are floating around out there given that few people could test those claims with a combination of field observations and maps; especially considering how remote the north shore of Molokai is.

Anyways, as far as I’m concerned, this is pretty much a helicopter waterfall unless you’re one of the few folks who can boat to this part of Moloka’i.

And even if you do go on a chopper ride, seeing all the major waterfalls (including this one) on such a tour is far from guaranteed.

You see, the catch-22 is that the November to March wet season is when water flows are highest, but it is also when clouds tend to cause changes in helicopter routes and prevent overflights of the best waterfalls (not to mention turbulence and sudden downpours adding further complications).

There is also the luck of the draw when it comes to helicopter seating – front seats are best for waterfall viewing, but go to passengers with the lowest body weights (see this article that we wrote about helicopters).

So I guess the bottom line is that it’s that uncertainty of outcome is what makes attractions like these rewarding and memorable. It also adds that sense of mystery for those wanting to come here as well as nostalgia for those (like us) who have been fortunate enough to have seen it with our very eyes.

Papalaua Falls resides on the island of Molokai, Hawaii. To my knowledge, it does not belong to a formal authority. However, for information or inquiries about the general area as well as current conditions, you may want to try visiting the Department of Land and Natural Resources (DLNR) website.

This is primarily seen from West Maui and Molokai Helicopter Tours leaving from Maui. See the Honokohau Falls page for directions on getting to the helipad there. The drive from the West Maui resorts like say Lahaina to Kahului was roughly 45 minutes.

Papalaua Falls’ Height (Private pilot in Hawaii) August 11, 2014 2:53 am by Rich Zegar - I have the good fortune to have lived in Hawaii for the past 22 years. I am a private and former military pilot. I have flown past Papalaua Falls on Molokai's northeast coast dozens of times over the years in fact have spread the ashes of several dear friends in the area because of it… ...Read More 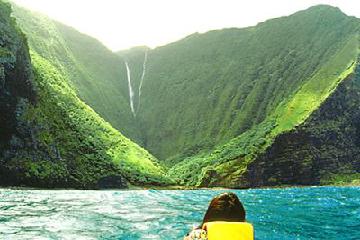 Papalaua Falls October 2, 2009 11:33 am by John "Caveman" Gray - I am extremely familiar with Papalaua Falls. I used to run kayak trips down Koolau, Moloka'i and will again someday. I also made two documentaries including the falls. "Moloka'i's Forgotten Frontier" won a 1985 Emmy Award and the US Outdoor Writers Council "Teddy" for Best Environmental Education production of the year. "Moloka'i'i, Child of the… ...Read More