Rainbow Falls is a very popular (I believe year-round) waterfall near downtown Hilo.

It has a large car park and viewing area to see the falls in a ready-made post card setting.

To reinforce that rare year-round property of this waterfall (despite hydroelectric developments further upstream), the Wailuku River (on which this falls flows) has been said to move a million cubic meters (275 million gallons) of water per year.

Just about every time we’ve made a stop here, we noticed numerous other people checking out this beauty, especially when tour buses arrive.

Personally, I don’t blame them because this waterfall was pretty enough to break into our Top 10 List of Hawaiian Waterfalls.

Even though we weren’t fortunate enough to see the falls with its namesake rainbows, I believe since it’s east-facing, it can produce rainbows perhaps around mid-morning or later in the morning.

Of course that assumes the sun would be out, which is not a guaranteed thing in the windward side of the island.

Even though it was only about a 50ft walk to the main lookout (see photo above), there was a walkway that climbed stone steps to the top of Rainbow Falls.

If rainbows can’t be seen at the main overlook, perhaps the top down view might provide better opportunities since the severe angle of broad daylight sun tends to move rainbows more towards the ground.

We also noticed an alcove behind the base of the falls, which was believed to be where King Kamehameha buried the bones of his father.

I also read that according to another legend, Hina, mother of Maui, also lived in that same alcove.

Just to give you an idea of how much this waterfall can change under heavy rains, we were here under severe weather on Super Bowl weekend in 2008 when the volume of water that fell over the stream practically multiplied ten-fold!

Under such conditions, there wasn’t a bare rock in sight as everything was under rushing brownish water!

Rainbow Falls resides in Rainbow Falls State Park on the Big Island of Hawaii. For information or inquiries about the general area as well as current conditions, you may want to try visiting the Department of Land and Natural Resources (DLNR) website.

From the Hilo Airport at the Hwy 19 and Hwy 11 junction with Banyan Drive in Hilo, we headed west on Hwy 19 for about 3 miles to Waianuenue Ave. Then, we turned left and took Waianuenue Ave west for about 1.25 miles. A quarter-mile past the junction with Hwy 200, turn right at Rainbow Falls Drive and drive another quarter-mile to the spacious paved car park for the falls on the right.

Left to right sweep of the swollen falls from its top 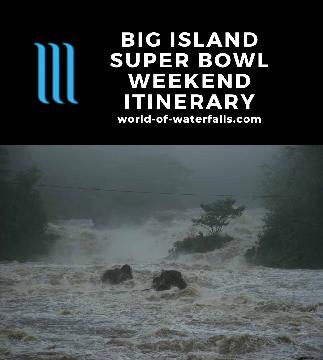