) is hands down the most beautiful waterfall on O’ahu.

The bottom 80ft drop of this 1100ft waterfall was once accessible along a trail leading to a swimming pool at the base of the falls.

That was where the last 80ft of the falls could be seen.

Unfortunately, a landslide at the terminus of the trail killed several people and injured many others on Mother’s Day in 1999.

It pretty much resulted in law suits that forced the state to close access to this trail indefinitely.

As it had been over 10 years since the incident when I did this write-up, I’d imagine that this was probably a permanent closure.

We’ve never been down there and it’s not looking like we ever will.

Sacred Falls from the air

So the only way we could see the falls was by taking to the air on a helicopter tour.

However, I wasn’t very impressed with the overall chopper experience on O’ahu, especially since the tour I was on hardly spent time in the Ko’olau Mountain Range where I thought most of the scenic action would be.

So if my experience would be indicative of a typical chopper experience on this island, then I would think the risk reward for spending a fairly significant sum of money for a chopper tour would be questionable.

Now that I think about it, I recalled that the company I went with did have a Sacred Falls only tour.

In hindsight, I probably would’ve been better off just doing that (though I don’t think it would’ve saved that much money).

Anyways, unless you absolutely have to see Sacred Falls from the air, it’s a tough call to determine whether it’s worth a couple hundred dollars to see this jewel of O’ahu.

That decision was made harder by the fact that this waterfall made our Top 10 Hawaiian Waterfalls List.

Sacred Falls resided in Sacred Falls State Park (no longer an official state park since its closure) on the island of Oahu, Hawaii. For information or inquiries about the general area as well as current conditions, you may want to try visiting the Department of Land and Natural Resources (DLNR) website.

Since I went with Paradise Helicopters to see this waterfall, I’ll give you the directions to their helipad location based on my visit.

Basically, from Waikiki, I took one of the many approaches (such as the Nu’uanu Pali Highway 61) to cross the Ko’olau Mountains to get to the eastern shore of O’ahu. Once I junctioned with Hwy 83 near Kaneohe, I then just drove along the North Shore on Hwy 83 until I reached Kuilima Drive. Then, I headed towards the Turtle Bay Resort on Kuilima Drive at Turtle Bay (this turnoff was flanked by a golf course, I recalled). Turning right onto Kuilima Drive, I then followed this road until I reached a big car park. The helipad was hidden away on the east side of this car park.

I was there in 1984 (Sacred Falls) November 29, 2017 10:41 pm by Laura - I went there with my brother and sister in law back in 1984. It was an interesting hike in, part of the trail had been knocked out by a boulder from above. The trail itself once you got to the cliffs was along the cliffs above the stream below the falls and fairly narrow so… ...Read More

SACRED FALLS-DON’T RISK YOUR LIFE, A FINE OR JAIL! February 18, 2015 12:50 am by Department of Land and Natural Resources - A newly released video from the Hawaii Department of Land and Natural Resources highlights the personal and legal perils of entering Sacred Falls State Park on Oahu. Intended to counter countless blogs and websites which encourage hikers to trespass into the park, despite dozens of warning signs, this video traces the tragic history of death… ...Read More

Manoa Forest More Impressive May 19, 2014 6:55 pm by Don - Yes it is true that Sacred Falls is impressive in terms of size and location up a steep-sided valley. However, the vegetation one passes on the way to Manoa Falls is much more interesting - like being in the Amazon rainforest surrounded by huge trees. I actually prefer cooling off in some of Oahu's smaller… ...Read More

Sacred Falls Regrets June 5, 2013 7:28 am by Kris - I lived in Hawaii from 1983-86 when my ex-husband was stationed there with the Navy. My kids and I routinely hiked to Sacred Falls. I will never forget climbing up and over thick branches and tree trunks to follow the narrow trail that slivered between sky-high cliffs. They cast shadows on the fruit-laden guava and… ...Read More

Sacred Falls is truly sacred . October 1, 2012 12:54 am by Kelly Lopes - I will never forget that day it was in 1973. I was 11 years old, and me and my sisters and a bunch of our cousin's, we started up the trail. There were so many mountain apples, I remember all us kids climbing the trees trying to reach the apples, then I saw a big… ...Read More

Beautiful Falls (Sacred Falls) July 10, 2012 4:14 pm by Betty Davis - My husband and I were in Hawaii 1952-1954. He was stationed at Hickham AFB. We hiked to the falls with friends. Over streams and up and down hills we went. Such a beautiful trip. At the falls all went into the pool for a swim except me. I can't swim, but I sat on the… ...Read More

Sacred Falls Mother’s Day 1999 September 26, 2011 8:54 pm by Ryan - On this beautiful Hawaiian Spring Day some friends and I hiked the short trail to the base of the waterfall where we began swimming. The water was cold and refreshing but after about a half an hour we all decided that even though the view was spectacular and the pool was amazing it was time… ...Read More

Sacred Falls 1980 September 23, 2011 6:19 pm by Ron Price - I am 52 to years old, and I still get emotional seeing pictures and videos of Sacred Falls. I was stationed on Oahu between 1979 and 1981, while in the Navy. When I went to Scared Falls with my friends, I thought the hike was a bit of a hassle until I started getting closer… ...Read More 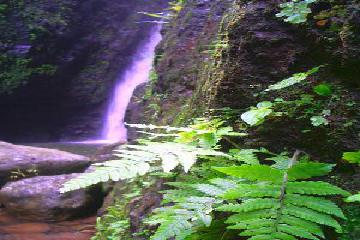 Sacred Falls before the rockslide October 8, 2012 2:40 pm by Betty Davis - Thanks to DavidBobby for this lovely photo of Sacred Falls before the 1999 Mother's disaster. B. Davis ...Read More
Truly a ‘Sacred’ Place September 27, 2011 9:11 pm by Sharlyn Ruhe - My first time hiking the trail to Sacred Falls was in 1994. The trail is through the rain forest of Oahu, or at least that's what it felt like. Wild fruit trees, such as the Malay apple litter the trail. They hang down and will hit you in the head if you're not paying attention.… ...Read More
The Tragedy of Sacred Falls, the most beautiful Park on the Island of Oahu July 23, 2010 12:23 pm by Mary Ross - Prior to the Mothers day landslide that killed 8 people and injured 50 others, on Mothers Day of 1999, Sacred Falls State Park was my favorite hike on this Island. Between the Years of 1989 and 1999 I, many of my friends, and my daughters, who at that time were between the ages of 8… ...Read More
Mountain Apples November 17, 2009 6:50 am by Jerry - I was stationed at Schofield Barracks from 1980-1983. I was introduced to Sacred Falls by some locals at my church. My fondest memory was climbing the hillsides on the trail to Sacred Falls. The Mountain Apples ripe. I've never seen anything like them before or since. They tasted like an apple but have the consistency… ...Read More