Gluggafoss (“Window Falls”?) was another one of those unexpected waterfalls where we didn’t plan on seeing it prior to the trip, but then we chanced upon it while randomly driving about in the Fljotsdalur area between Hvolsvöllur and Seljalandsfoss.

What made this seemingly obscure waterfall (also called Merkjárfoss) memorable to us was its inverted trident shape.

Apparently we weren’t alone in finding something alluring about this waterfall because we were surprised to see a handful of other photographers who were also interested in photographing this falls.

Even though the falls was easily visible from the road 261, there was a short path that took us pretty close to the base of the falls (as shown in the photo above).

During our visit, we just so happened to start getting some morning sun, which was perfect as this south facing waterfall was starting to contrast well with the green-matted cliffs and the hint of blue skies behind it.

Speaking of cliffs, like with Seljalandsfoss, this waterfall apparently also plunged over an escarpment that was once part of the coastline of Iceland in the last Ice Age.

In addition to Gluggafoss, we also saw a handful of other interesting (albeit obscure) waterfalls along the road through Fljotsdalur east of Hvolsvöllur.

We didn’t know it at the time, but apparently this was part of the so-called Saga Trail as apparently this area was rich in stories told by the early inhabitants of the country.

Gluggafoss resides in the Southern Region near Selfoss, Iceland. It is administered by the municipality of Rangárþing eystra. For information or inquiries about the general area as well as current conditions, you may want to try visiting their website.

From the turnoff for Seljalandsfoss, we took the Ring Road west for about 4.5km to its junction with Route 250.

Then, we turned right onto Route 250 and followed it to the Route 261 for about 12km (we were able to see Gluggafoss on the approach).

Once on the 261, the turnoff and car park was to the left of the three-way junction.

Had we gone right on the 261, we would’ve gone to the glaciated Þórsmörk (“THORS-murk”), which we didn’t take the time to see.

Alternately, we could’ve gone on the road 261 east of the town of Hvolsvöllur for about 17km to the car park for the falls.

Hvolsvöllur was 100km (under 90 minutes drive) east of Reykjavík. 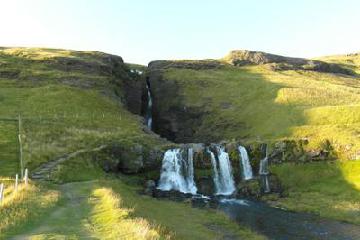 Gluggafoss in Iceland: “windows” indeed January 17, 2015 5:48 pm by Ingrid - Partially inspired by this site, I have recently visited Iceland to see some of its amazing waterfalls in real life. I wanted to add my pictures of Gluggafoss, which might help to explain its name. "Gluggi" seems to translate as window. As you can see, when less water is flowing, the waterfall seems to fall… ...Read More