Rating: 3.5
Difficulty: 1
Hiking Distance: almost roadside; up to about 4.5km for full experience
Suggested Time: as little as 15 minutes or up to 2 hours or so
Date first visited: 2007-06-28
Date last visited: 2021-08-13
Waterfall Latitude: 65.6829
Waterfall Longitude: -17.5507
Directions: Get to the waterfall
Vicinity: Find nearby waterfalls
Jump to: Photos, Videos, Other Info
Jump to: Comments and Reviews

Godafoss (more accurately Goðafoss; pronounced “GO-thuh-foss”) was one of the more famous waterfalls we encountered while driving the Ring Road through the Mývatn District of Iceland’s Northeast Region.

It was a 12m tall and 30m wide waterfall on the Skjálfandafljót River (cutting through the Barðadalur Valley) that was segmented into two main components with smaller segments while possessing an arcing semi-horseshoe shape.

Although both times we’ve visited this waterfall were under some dreary overcast (and rainy in one case) conditions, we could still see the color in the river, which I’m sure would be amplified when the sun would come out.

The operative word with our visits to Goðafoss was “accessible” as we easily experienced it from both sides of its banks, which I’ll describe individually later in this write-up.

The first time we visited the falls in late June 2007, we actually drove to each side and experienced the waterfall in short order thanks to short walking paths along the banks of the Skjálfandafljót River.

When we came back in August 2021, it appeared that the walkways and lookouts were even more developed so my Mom and I just walked to both sides to get the full experience and not get too lazy.

Experiencing Goðafoss from the West Side

If you were driving the Ring Road in a clockwise manner, the west side of Goðafoss would be what we’d encounter first.

In my mind, this was the “convenient” side as it had a large car park (see directions below) along with wide walking paths and picnic tables.

Heck, the viewing area at the farthest end of the west side of the river was even paved, where I swore that we used to be able to drive even closer to this side of the falls on our first visit here back in late June 2007.

In fact, I recalled on that first visit that most of the tour bus traffic was on this side so their passengers wouldn’t have to walk as far.

In any case, it was a mere 200m to walk from the far corner of the car park to an info board near the furthest of the sanctioned lookouts beyond the end of the concrete part of the path.

Back when the railings and lookouts weren’t established on our first visit, we managed to get all the way to a view where we could look across the brink of the waterfall.

However, there seemed to be infrastructure established on our August 2021 visit that discouraged going that far.

Going further downstream in the opposite direction, there were more built-up viewing areas and rest benches to at least give us partial frontal views of the Goðafoss Waterfall.

We never really got a full contextual view from the west side lookouts because there always seemed to be cliffs on concealing the far right side of Goðafoss.

We had the option of returning to the car park from here or exploring a bit further downstream beyond the start (or end) of the concrete section, where we were treated to less busier perspectives of the gushing Geitafoss.

Right beside this side of Geitafoss was a deep alcove as well as a natural arch above it called Hansensgat or Hansen’s Hole.

We then had the ability to backtrack to the car park to complete a roughly 1.5km loop or go to the footbridge over the Skjálfandafljót River to cross over to the east side.

Experiencing Goðafoss from the East Side

The east bank seemed to provide a great deal of flexibility in terms of how we were able to view the falls, and in my opinion, I thought it was the more interesting side.

Indeed, starting from the east side of the bridge over the Skjálfandafljót River near the Fosshóll Farm, we were able to see the 5m Geitafoss (Goat Falls) as well as a partial view of Goðafoss.

Continuing upstream along the river, the path briefly skirted alongside the turbulent river upstream of Geitafoss before joining up with the main paved footpath.

Throughout this stretch of the walk, I noticed evidence of the basalt lava that was deposited here some 8000 years ago from the Trölladyngja Mountain.

The basalt was the erosion-resistant layer that both channeled the Skjálfandafljót River as well as gave rise to the elevation difference resulting in waterfalls like Goðafoss and Geitafoss.

Continuing further upstream along the west side of the river, we then encountered sanctioned lookouts on the cliff rim overlooking the semi-circular shape of the brink of Goðafoss as well as getting right to the waterfall’s brink.

There was also steep steps leading down to the rocky banks of the river for a more frontal in-your-face look at the Goðafoss itself.

After having our fill of Goðafoss, we could backtrack to Fosshóll, an even closer car park and picnic area just 450m from the upper lookout, or go all the way back to the car park on the west side.

The entire experience would be on the order of 4.5km round-trip though we took advantage of Julie driving from the west side to the east side while Mom and I walked around.

That helped to reduce our overall amount of walking to less than 3km in total.

From what I understand, this curling horseshoe-shaped waterfall had a fairly key role in Icelandic history.

Apparently back in the year 1000, the lawspeaker at the time Þorgeirr Ljósvetningagoði had the unenviable task of choosing the official religion of Iceland.

Perhaps under the pressure of Christianity’s convert or die methods, Þorgeirr chucked his icons of Norse deities into the falls (which, by the way, is translated to mean “waterfall of the gods”).

However, being a pagan man at heart, he secretly maintained allegiance to the Norse deities even though he outwardly did what he thought was the right thing to do to avoid this issue resulting in bloodshed.

Godafoss (Goðafoss) resides in the Northeast Region near Akureyri, Iceland. It is administered by the municipality of Þingeyjarsveit. For information or inquiries about the general area as well as current conditions, you may want to try visiting their website.

This Godafoss Waterfall is well-signed and right off the Ring Road between Akureyri and Laugar.

We then drove nearly 10km to the turnoff for Goðafoss, which was the first turnoff immediately after crossing the road bridge above Skjálfandafljót.

On the approach, we were already able to see the waterfall from the Ring Road when the weather wasn’t foggy.

Finally, we drove the last 300m to the spacious car park on the west side of the river.

Conversely, we also could have turned left onto the Barðadalsvegur Eystri Road by Fosshóll right before the bridge over Skjálfandafljót, which was about 300m east of the turnoff for the west side car park.

Once on the Barðadalsvegur, we then drove nearly the final 300m to a car park on the right that was for exploring the east side of Goðafoss.

In either case, the drive from Laugar to Goðafoss should take no more than 15 minutes.

As for coming in the other direction from Akureyri, we could follow the Ring Road east for at least 28km to either of the aforementioned car parks for Goðafoss.

The drive would be slightly extended had we opted to avoid the toll tunnel and driven the longer Route 83/84 around the tunnel instead.

For geographical context, the nearest town was Laugar, which was 47km (over 30 minutes drive) east of Akureyri, 36km (about 30 minutes) west of Reykjahlið (or Mývatn), 201km (about 2.5 hours drive) west of Egilsstaðir, and 434km (over 5 hours drive) northeast of Reykjavík.


Checking out Geitafoss and parts of Godafoss from the footbridge


Sweep of the falls as seen from its western bank


Looking down at the impressive falls from the east bank

Spot the Harlequin ducks (Godafoss) October 26, 2009 10:45 pm by George Holderness - I got up close to the west side of the falls for a good panorama and plenty of noise too. I was surprised to see that a good flow of water escapes from just above the top of the falls and flows off to the west. Here on that day (although no guarantees are offered)… ...Read More 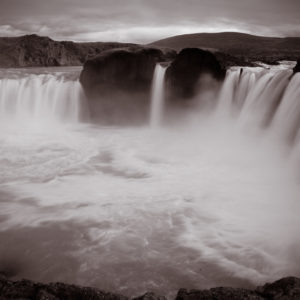 3.5 is harsh! August 4, 2019 7:35 am by Ida Koric - Hi folks, I don't know how hard it is to get a 5 on your rating scale, perhaps the rain dampened your experience, but this waterfall is spectacular, in every way. Does popularity lower the rating? It's nice to have a place to oneself, but the visual impact of the geology itself is stunning. ...Read More