Gufufoss looked to us like the largest and most striking waterfall in the Seyðisfjörður area, especially when we first looked upon it on our first trip to Iceland in 2007.

On that trip, the falls plunged with a rectangular shape and power that made it difficult to even get close to its misty base.

According to my Icelandic dictionary, the word “gufa” meant “vapor” or “steam” so if this translation was correct, then this would be the “Steam Falls”, which was a rather appropriate name as you can see from the photo above.

That said, when we came back to Seyðisfjörður in August 2021, the falls had a bit less volume than on our first visit, and we had to contend with quite a bit of fog before we could properly see it.

As for getting to experience Gufufoss, there was a pullout pretty much right in front of the waterfall (see directions below).

From there, we were able to go on a pretty short walk along the banks of the Fjarðará before getting right up to the spray zone of the waterfall.

Given that this was an east-facing waterfall, we learned that morning was the best time to see the falls (possibly with a rainbow) since we’d be looking against the afternoon sun if it’s sunny.

There was also a thin trail that went downstream along the Fjarðará from the car park for Gufufoss, which eventually led to both the Efri and Neðri Úðafoss (“Upper and Lower Spray Falls”?) though this trail wasn’t as obvious to find on our second visit.

In fact, the Fjarðará contained many other smaller but powerful waterfalls, and the signage suggested that you could walk along the stream all the way to town.

Since I was content with going only as far as Neðri Úðafoss, I can’t say more about it, but when you drive up the Route 93, you can definitely notice a bunch of them.

Finally, it’s worth noting that on our first visit to Seyðisfjörður back in July 2007, there was a lot of construction activity.

That’s mostly because the steep-walled mountains here are prone to avalanches and landslides, and there always seems to be some degree of work going on to try to mitigate their effects.

I always contended that of all the fjords that we’ve encountered in Iceland, Seyðisfjörður reminds me of a Norwegian fjord the most, and the tendency to have rock slides and avalanches certainly reinforces the point.

Gufufoss resides in the East Region near Egilsstaðir, Iceland. It is administered by the municipality of Múlaþing. For information or inquiries about the general area as well as current conditions, you may want to try visiting their website

The pullout for Gufufoss was a mere 3.2km west of the three-way intersection at the Seyðisfjörður town center (at the junction of Vesturvegur and Austurvegur) along Route 93.

Given the improvements that we saw to the pullout during our August 2021 visit, you really can’t miss it as it’ll be obvious once you see the falls to your left.

Coming in the other direction, again, there will be a sizable pullout on the right about 21.3km east along the Route 93 from its junction with the Route 94.

It’s a little over 19km east of the car park for Fardagafoss. 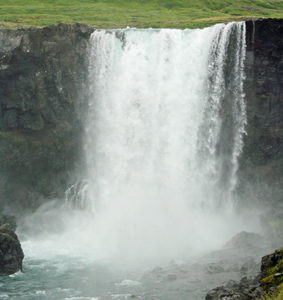 Waterfalls between Egilsstaðir and Seyðisfjöður (Iceland) August 27, 2020 4:28 pm by Jose Luis Sanchez Esteban - Driving along the road that connects these cities I found an amount of waterfalls which names I always failed to know. Three of them are powerful enough to have one, and I guess that two may be Gufufoss and Múlafoss but I'm not sure of it. I can't identify your Gufufoss with any of them.… ...Read More