Gullfoss (translated as “Golden Falls”) may be Iceland‘s most popular waterfall and perhaps the key reason behind the Golden Circle Tourist Route getting its name.

We can certainly testify to that statement given how it was always busy during our visits whether it was twice in 2007 or another time in 2021.

As you can imagine, its notoriety was due to being one of the major attractions on the aforementioned Golden Circle Route (or Tour) that included Geysir and Þingvellir as a very doable day trip out of Reykjavík.

Nonetheless, the waterfall’s popularity was well-deserved because it was one of the more unique ones we’ve seen, especially for its size.

In fact, we thought it was both spectacular and memorable enough to earn a spot on our World’s Top 10 Waterfalls List.

What made Gullfoss stand out to us was that it featured two distinct drops in succession at right angles to each other while spanning the entire width of the Hvítá River.

Adding to the scenic allure was that the river flowed wildly and freely so it could be experienced in all seasons as each season would yield very different moods and appearances.

Our visits happened to be during the Summer so it produced beautiful rainbows in its wafting mist when the afternoon sun came out.

The glacial coloring of the river (since its primary source was the melting of the Langjökull glacier) also became very apparent when the sun came out as well.

However, when we viewed the falls from the main overlooks near the visitor facilities, the lower drop’s fall into a narrow gorge created the illusion that the waterfall plunged into an abyss.

So that effect made the falls appear higher than its modest height would suggest.

It’s hard to believe that Gullfoss almost disappeared due to the desire for hydroelectricity by various interests.

In some fortuitous bit of misfortune (at least for those with development aspirations) resulting in lack of sufficient funds, attempts to harness the falls had been unsuccessful.

Ultimately, the waterfall was sold to the state of Iceland, and despite further interest to utilize the river by the state, it was eventually conserved.

A more romantic saga depicted Sigríður Tómasdottir (the daughter of the landowner who was about to sell his land which included the falls) threatening to throw herself into the falls if the land was sold.

As a result, the father pulled out of the deal, the falls was made a reserve, and the rest was history.

It’s said that this saga wasn’t true, but nonetheless we saw there was a memorial commemorating Sigríður Tómasdottir on our first visit to Iceland back in 2007 (we didn’t see it on our 2021 visit though COVID-19 might have complicated that).

As for experiencing the waterfall, we parked at the car park closest to the visitor facilities (see directions below), then we walked past the facilities onto a boardwalk that took us to an overlook of the falls.

This was the view you see at the top of this page.

Then, we followed a trail that descended steps towards the lower car park where there was a trail that led alongside the gorge carved out by the falls as it led to brinks of both the lower and upper tiers of Gullfoss.

To our knowledge, there wasn’t a way to experience the falls from the other side of the river, but it wasn’t necessary in our minds.

In any case, the walking would probably comprise no more than 15 minutes or so total.

We needed a few more minutes to walk all the way to the brink of the falls.

In addition to the hordes of tourists who were both self driving as well as on various tours, we also shared this waterfall with hordes of midges, which seemed to be abundant in the early Summer (especially on both of our June 2007 visits).

They certainly conspired to hasten our time spent at Gullfoss.

That said, the midges didn’t seem to be as bad on our August 2021 visit so perhaps there was a seasonal nuisance factor associated with a visit to this falls.

Gullfoss resides in the Southern Region of Iceland near Reykjavik, Iceland. It is administered by the municipality of Bláskógabyggð. For information or inquiries about the general area as well as current conditions, you may want to try visiting their website.

To access Gullfoss from Reykjavík, we drove east on the Route 49 for about 7km as we kept left to stay on the Ring Road (Route 1).

After passing through several roundabouts, the Route 1 will eventually junction with the Route 36 on the right (about 15km from downtown Reykjavík).

We’d then follow Route 36 (Þingvallavegur) east for 45km before leaving the 36 (the 36 went south towards Selfoss) to continue straight on the Route 365 (Gjábakkavegur) towards Geysir and Gullfoss.

After over 14km on the Route 365, we then continued straight onto the Laugarvatnsvegur (Route 37) east for another 24km before continuing on Route 35 for the last 14km to the Gullfoss car parks.

There’s a fork in the road near the waterfall, where the fork on the left (Kjalvegur) goes to the upper car park, which has all the tourist facilities.

The fork on the right goes to the lower car park, which gets you right up to the front of Gullfoss, but it requires going up steps to reach the same tourist facilities at the upper car park.

Overall, the drive from Reykjavik in the manner described above (which equates to driving half the Golden Circle clockwise) is 116km and would take over 90 minutes.

Of course with the Golden Circle being a circular route, it’s also possible to drive counterclockwise via Selfoss and Fluðir.

This approach would be a 139km drive taking about 2 hours.


Sweep of the falls from the familiar lookout

Gullfoss October 26, 2008 7:45 pm by Jack Metcalf - Gullfoss was one of the most beautiful things that I have ever experienced in my life. This shows that nature is a very powerful source. I would consider the waterfalls in Iceland to be one of the greatest things to witness in the world today. NOT only the waterfalls but the country of Iceland itself. ...Read More 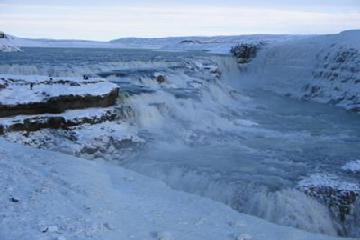 Winter Gullfoss May 13, 2010 8:54 pm by Julie Edwards - I love your Gullfoss pictures, they look so different from when I visited this waterfall in November. An immense icy waterfall surrounded by snow and more ice. Absolutely stunning. ...Read More