Ofaerufoss (more accurately Ófærufoss; pronounced “OH-fye-ru-foss”) was another one of those rugged backcountry waterfalls in the remote interior highlands of Iceland.

This gorgeous multi-tiered waterfall used to have a natural bridge spanning over the top of its lower drop, but it collapsed in 1993 probably due to a combination of earthquakes and natural erosion.

With the bridge, it would’ve been a very unique and awesome sight to behold (such combinations of natural bridges with a waterfall are pretty rare).

Yet even without the bridge, it was still one of the distinctive waterfalls we had seen, and it provided an excellent excuse for us to experience some of the forbidding Icelandic Interior.

We visited this waterfall as part of a paid day tour (actually more of a transport bus) from Kirkjubæjarklaustur to the geothermal springs at Landmannalaugur (“LAND-man-nuh-loy-gur”) and back.

The waterfall fell into the remote Eldgjá chasm and was a stop along the way to Landmannalaugur (the bus actually made a stop here on the way there and on the way back).

After having done some nervous 4wd driving on our own the day before to Fagrifoss, we figured we ought to let those better equipped to cross this terrain more routinely take care of the transport.

Of course, the drawback to doing a paid tour (or transport bus) was that the 4wd bus schedule barely allowed us enough time (less than an hour) to walk to a view of the falls and just take a few photographs before we had to return.

It was a bit rushed for my liking, but perhaps the persistent midges also didn’t help matters in terms of having a stress-free experience.

At least the walk was mostly flat.

Nonetheless, the view of the falls was still gorgeous from across the river, and it appeared that getting closer to the falls would’ve meant fording that river.

Speaking of the walk, it was all along the Nyrðri-Ófæra river within the Eldgjá chasm, which was a system of fissures spanning some 40km that might even go beneath the Mýrdalsjökull glacier.

I suspect that the gap in the earth was where the river flowed, and the waterfall was on a tributary that fell down one of the chasm walls to add to the volume of the river.

The landscape throughout the walk was ruggedly barren, but the contrast between some green matting (from low-lying shrubs and moss) with the black and reddish soil made for some pretty unforgettable scenery.

It was speculated that the fissures here resulted from volcanic eruptions that might have had even greater intensity and impact than the infamous Lakagígur eruptions (see the Fagrifoss page for a brief description about that).

Overall, our out-and-back excursion started (more like picked us up) a few minutes before 9am at Kirkjubæjarklaustur and didn’t come back until about 6:40pm.

By the way, I looked up my Icelandic dictionary for the meaning of the name of the falls, and I noticed that the word “ófær” was an adjective for “impassable”.

If applied directly to the name of the falls, it might translate awkwardly to mean “Impassable Falls”, but I think it was meant more for the river Ófæra, to whom something might have thought was impassable.

Ofaerufoss merely a side attraction?

It could very well be that Ofaerufoss was more of a side attraction to Landmannalaugur, which was a colorful geothermal and volcanic area.

Most people come here to soak in the hot springs, but the stark colorful terrain and rugged landscape also made the area very photogenic.

Landmannalaugur was where the bus stopped, and where we had to exit the bus and hop on a different bus going back the other way after about an hour.

The hour that we had to do a little exploring here was also a bit rushed for my liking.

In hindsight, it might have been better if we prepared ourselves to camp for a night or self-drove here from the much easier northern route (though we’d still have to face the rugged driving conditions to Ofaerufoss from Landmannalaugur).

But even from the photos of Landmannalaugur that I put on this page, you can readily see just how beautiful it was over there, and why it was so popular.

In fact, the activity in the area almost seemed out-of-place as it was like there was an oasis of civilization out in the middle of nowhere!

Ofaerufoss resides in the South Region near Kirkjubæjarklaustur, Iceland. It is administered by the municipality of Skaftárhreppur. For information or inquiries about the general area as well as current conditions, you may want to try visiting their website.

Since we did Ofaerufoss as an organized tour to Landmannalaugur from Kirkjubæjarklaustur, we only had to park at a designated car park area in town right at a gas station at the four-way intersection with the town road, the Geirland road, and the Ring Road.

Kirkjubæjarklaustur was 259km east of Reykjavík.

Had we self-drove to the falls, the route would be to take the Ring Road for about 23km west of Klaustur to its junction with Route 208.

After 5km, turn right onto Fjallabak (“FYAT-luh-bak”; meaning “behind-the-mountain”) Road, which gets bumpier the further you go.

After about 38km (there’s at least one river crossing), there’s a turnoff to the right for Eldgjá.

Take that road for the last 3km to the car park at the end (there’s two more river crossings I believe).

Just to give you an idea of how rough going it can get, Julie and I witnessed a tour bus that got stuck just before making the last river crossing.

It actually required a rescue crew with hauling capabilities to pull the bus out of the mud.

That said, we did notice there were some footbridges so it might have been possible to park the car before the river crossing, then walk the rest of the way to the falls.

Alternately, on the northern approach, we were able to easily drive from Hrauneyjar Highlands to Landmannalaugur, which was doable by 2wd passenger cars (we did this on a separate drive towards the end of our Iceland trip on a day we didn’t visit the falls).

The route followed the Road 26 east for about 7km towards its junction with the F208 backcountry road (this was the Fjallabak Road).

Then, we followed this road for about 30km all the way to the turnoff for Landmannalaugur.

However, from Landmannalaugur to Ofaerufoss, we would’ve had to drive another 28km on much rougher terrain (that may not be doable by 2wd passenger vehicles), which would then junction with the spur road to Eldgjá on the left. 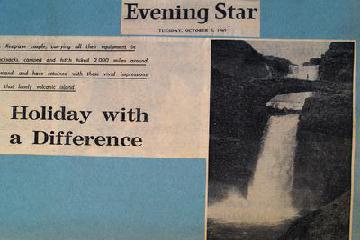 Ofaerufoss in 1965 October 21, 2015 10:57 am by Gerald Ponting - It took us a one-day, 25-mile round-trip walk to see Ofarufoss, in the days that the bridge still existed. Back at home, a picture of it published in the local press led to a part-time income which has lasted the rest of my life. Back in 1965, my first wife and I, then aged around… ...Read More 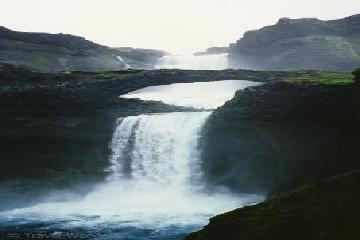 My Favorite Iceland Waterfalls November 8, 2008 1:09 am by Mark H - On my top ten (of Iceland Waterfalls), I'd place Gullfoss first but ordering them is difficult. Another worthwhile area is Gjain which has a number of picturesque falls all visible from one vantage point. I have written a story on Iceland's natural beauty including photos of five of my favourite waterfalls (Dettifoss, Gullfoss, Svartifoss, Ofaerufoss… ...Read More