Svartifoss was perhaps the signature attraction of Skaftafell National Park in the East Region of the country (though it felt more like the southeast region to us if there was such an official designation).

The reason why we made this claim was that it possessed pronounced hanging hexagonal basalt columns beneath a 20m tall waterfall.

Although this combination of basalt columns and a waterfall was not unique (as we had seen numerous examples of these around the world, including Iceland itself), this waterfall seemed to get the lion’s share of the popularity and fame.

We suspect this might be because the basalt columns had an obvious geometrical shape.

In addition, the falls was relatively easy to access and admire from up close (while also giving us a bit of a geology lesson).

Finally, the falls possessed a year-round flow in a landscape that contained glaciers, volcanoes, and large tracts of black sand or sandur.

In other words, this waterfall embodied all that was quintessential raw Icelandic scenery.

While Svartifoss was worthwhile in and of itself, we were surprised to find that there were three other waterfalls in the area – Hundafoss, Magnúsarfoss, and Þjófafoss.

The name of the falls translated into something like “Black Falls” which might be attributable to the darkness of the underlying basalt columns.

We’ve typically found such features where there seemed to be evidence of basaltic lava being rapidly cooled by ice (e.g. the Devil’s Postpile formation in the Eastern Sierras of California as well as Kirkjugólf near Kirkjubæjarklaustur).

Thus, over time, the thermal stress of the rapid temperature fluctuations on the hard basalt resulted in fractures at the weakest joints the lava.

These joints happened to be vertical and at 120-degree angles thereby resulting in the hexagonal columns.

In fact, the columns of Svartifoss were such a distinctive feature that it was said to inspire Icelandic architecture.

We saw evidence of this when we visited the Hallgrímskirkja in Reykjavík.

We started the Svartifoss hike from the visitor center (see directions below), and then we then proceeded to follow the signs and hike roughly 1.5km along a well-used and well-defined trail.

The hike began with a serious climb as the trail left the vast sandur and entered into more hilly terrain.

The bright side of the aerobic workout on the ascent was that it would be downhill on the return.

More than two-thirds up the ascent, we noticed a signpost and lookout for Hundafoss, which meant “Dog Falls.”

We weren’t certain how this waterfall got its name, but perhaps it had to do with a dog that fell over the falls for one reason or another and was named in its honor.

In any case, this was an attractive waterfall where we noticed plunging over a cliff and provided a nice photo stop to break up the uphill hike.

Just minutes after visiting Hundafoss, we then saw another signpost and lookout, but this time it was for the waterfall Magnúsarfoss.

This was a bit shorter than Hundafoss, but it featured a profile view of the ravine downstream of the falls while it appeared that some hikers scrambled to get right up to the waterfall’s top.

Beyond Magnúsarfoss, the climb finally started to flatten out.

After a few more minutes on the trail, we encountered a trail junction where the trail coming in from the left was from an alternate car park that we noticed tour bus passengers would come from.

It turned out that people who came from this path (which we dubbed the “cheater’s path”) would have missed out on Hundafoss and Magnúsarfoss, but they would essentially cut their overall hike that we were doing by around one-half to one-third.

Then, the trail undulated briefly over hills before making a final descent to the base of Svartifoss.

We were able to get distant views of the falls before we eventually crossed a bridge and ended up right at the plunge pool of the falls.

Right around the plunge pool, we noticed chunks of hexagonal blocks that have already chunked off the cliff while some of the pieces had moss growing on them fed by the spray of the falls.

In addition to the Svartifoss hike, we also hiked in the opposite direction from the Visitor Center.

This trail headed further to the east for about 2km round trip.

The mostly flat trail led us right to the terminus of the dirty glacier Skaftafellsjökull though we didn’t go further than the sanctioned lookout since the dirty ice could easily be mistaken for regular dirt.

Svartifoss resides in the East Region near Höfn, Iceland. It is administered by the municipality of Sveitarfélagið Hornafjörður. For information or inquiries about the general area as well as current conditions, you may want to try visiting their website.

The turnoff for Skaftafell National Park is off the Ring Road (Route 1).

It was about 54km west of the icebergs at Jökulsárlón (“YUK-ul-sour-lohn”), 133km west of the town of Höfn (sounds like “HUP”, almost rhymes with cup) and 67km east of Kirkjubæjarklaustur (“KIRK-hew-buy-ar-kloi-stir”).

Once on the turnoff, take it to the car park by the Visitor Center.

If you’re interested in doing the “cheater’s route” by parking at the alternate car park, continue driving on the park road west past the Visitor Center.

The road will eventually narrow into an almost single-lane road as it would climb steeply up switchbacks until reaching the small car park.

However, on the way up, we were able to stop the car at one of the switchbacks where we were able to get a distant view of the rather obscure waterfall labeled Þjófafoss on my Gapmin Iceland map

(though I somehow bent that CD so I can’t install it anymore without buying a new copy).

While visiting Svartifoss, we thought it was definitely worth checking out the glacier lagoon Jökulsárlón, which featured deep blue icebergs and glaciers.

Actually, since we visited this area as part of the long drive from Egilsstaðir (which was 372km further to the east), Jökulsárlón was on the way.


Closeup look at the falls. Guess who that is in the foreground taking a photo of it? 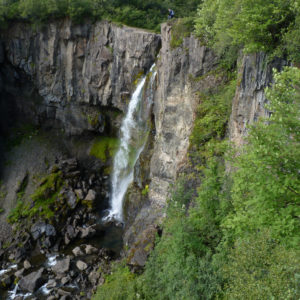 Hundafoss in Skaftafell National Park, Iceland March 1, 2019 11:51 am by John Moerk - Hundafoss is the tallest (78 feet) and first of three waterfalls encountered on the Bærjargil stream along the popular trail to Svartifoss in the Skaftafell region of Vatnajökull National Park, ...Read More