Svodufoss (or more accurately Svöðufoss; pronounced “SVUEW-thuh-foss”) was an interesting block-shaped waterfall with basalt columns that has the potential to be seen with the famed Snæfellsjökull (“SNAYE-fells-yuek-ul”) Glacier.

That said, according to my Gaia map, its stream was also called Laxá suggesting that maybe salmon might find their way up to this waterfall barrier.

In the adjacent drainage to the east was a second waterfall called Kerlingarfoss (“KEHRT-ling-ur-foss”), which was on the Fosslækur Stream.

That waterfall was significantly thinner than Svöðufoss, which might explain why it was easily overlooked.

I wondered if its name might carry a diminutive connotation since my Icelandic dictionary suggested that kerling meant an old woman or a hag (so does that imply the larger Svöðufoss was the karl or old man?).

Anyways, as for seeing Svöðufoss together with a glacier, that was precisely my experience when I first saw them on a beautiful day in June 2007.

However, the glacier was concealed by clouds when I came back in August 2021, which goes to show you how the fickle Icelandic weather can have an effect on the overall experience (as it can for any excursion throughout the country).

” made their entrance into the earth’s depths.

Improvements Made to the Svöðufoss Trail

On our first visit back in June 2007, Svöðufoss was more of an obscure attraction though I did notice an easy-to-miss roadside sign for it near Rif.

In fact, if it wasn’t for that sign, I could have easily dismissed it as another roadside waterfall to pause for before moving on.

Nevertheless, when we followed the fairly bumpy rural roads to attempt to get closer, we had trouble trying to figure out how to get that better experience from up close without trespassing.

As a result, we only managed distant views where the Snæfellsjökull Glacier dwarfed the 10m tall waterfall.

When we came back 14 years later, we noticed that there was a more obvious trailhead and well-developed trail leading to a viewpoint.

I suspect that these improvements made a big difference in dramatically increasing this waterfall’s popularity.

The first 250m of the trail told us straight away that the local authorities intended for Svöðufoss to be a legitimate tourist attraction on the Snæfellsnes Peninsula.

Indeed, they added lawn grass and put on top of it the non-slip grid, which was clearly intended for tours, especially if they involve more elderly passengers.

This newly-developed path led up to the viewpoint where a pair of long rest benches each backed by a wall (likely made from local rocks) faced the waterfall.

I suspect that this viewing area allowed for the less ambitious visitors to enjoy the falls before heading back.

However beyond the viewpoint, a less-developed but well-worn use-trail veered to the left as it continued to make its way closer to Svöðufoss.

The mostly flat trail made a fairly easy crossing of the Fosslækur Stream (downstream of Kerlingarfoss) at about 200m beyond the official viewpoint.

Then, the trail followed along the east bank of the larger Hólmskelsá Stream towards the Svöðufoss itself making one more minor stream crossing before the trail started rising after another 250m beyond the Fosslækur crossing.

At this point, there were scattered use-trails to try to get a closer or more frontal look at Svöðufoss though they looked very eroded and sketchy, and we didn’t try to take on more of that risk considering the reward.

So we kept going up the canyon rim for the remaining 50m or so to the brink of the falls, where the basalt layer was more easily seen though we had to be real careful about not getting too close to the cliff edge.

This was our turnaround point, and after going back the way we came, my GPS logs suggested that we had walked a total of about 1.6km, and it only took us on the order of 45 minutes.

Svodufoss resides in the West Region near Ólafsvík, Iceland. It is administered by the municipality of Snæfellsbær. For information or inquiries about the general area as well as current conditions, you may want to try visiting their website.

From the Hotel Ólafsvík in the center of Ólafsvík, we drove about 4km west along the Road 574 to a signed turnoff on our left.

Taking the unpaved road on that signed turnoff, we then followed the somewhat rough gravel road for roughly 1.3km before turning left at the next junction.

Finally, after another 250m or so from the junction, we arrived at the new trailhead parking for Svöðufoss.

Overall, this drive only took us about 5 minutes or so.

I also recalled on our June 2007 visit that there was another signposted turnoff closer to the small town of Rif a little over 6km west of Ólafsvík.

From there, we then went another 3.2km along the rough unpaved road to the distant lookout we had to settle for.

The rough unpaved road eventually looped back towards road 574 by way of the turnoff described earlier.

Brief 270-degree sweep from the official lookout for Svodufoss 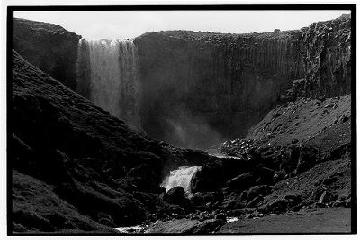