Systrafoss (Sister Falls) was an enigmatic waterfall as far as I was concerned because I never quite understood how or why it behaved the way it did on each of our visits over a span of 14 years.

What I mean by this is that this was the only waterfall casualty of our 2007 trip to Iceland as we saw that it didn’t have any flow at all!

Even though a local was surprised by its condition as he told us that the falls was fed by Systravatn (Sister Lake), I was under the impression that this falls would only flow when the lake had overflowed.

Then, when we came back in August 2021, I was surprised to see that Systrafoss flowed as well as it did while driving the Ring Road by the town of Kirkjubæjarklaustur (or Klaustur for short).

Despite it being later in the Summer, I had a hard time wrapping my head around why it was dry in early July 2007 but flowed well in early August 2021.

If this was a seasonal waterfall, you’d think that it wouldn’t flow very well later in the Summer, but we observed the opposite!

If this was a glacier melt waterfall, then I could understand its increased flow later in the Summer.

However, Systravatn seemed to be far from any of the nearest major glaciers in Vatnajökull and Mýrdalsjökull.

So was Systrafoss regulated or impacted by some kind of man-made scheme to divert or control its flow?

As a result, whatever the case may be, I can’t advise on predicting when would be the best time to witness this strangely-behaving waterfall.

You’d just have to stop by if you happen to see it flowing while passing by along the Ring Road west of Kirkjubæjarklaustur.

Extend A Visit Beyond A Roadside Attraction

For all intents and purposes, Systrafoss was pretty much a roadside waterfall.

However, we noticed that there was a trail going past a picnic area at its base and a small natural bridge at the bottom of a large rock (called Stóri Steinn).

On the other side of the natural bridge, we saw an interesting-looking avatar for a troll or sorceror using wool skin standing behind a cauldron.

Right behind this avatar on a spur trail leading up to a fence was a partial view of Systrafoss from different angles than what was seen from the car park.

That was the extent of my short visit with my Mom in August 2021 when the waterfall was performing.

That said, if we were so inclined, we could have done a longer trail up the Bursasteinn and Gjót, and then ultimately to the shore of Systravatn Lake before turning back.

Another thing unusual about this area fronting Systrafoss was that it featured a bunch of birch trees.

Apparently, these trees were planted, and now some of the tallest trees in the country reside in this very grove.

Of course, it also complicated the Systrafoss experience in that such trees also obscured our ability to get closer views of it.

Nevertheless, the re-foresting of Iceland was something I noticed more of throughout the country during our August 2021 trip, and it seemed to be one of the few countries we’re aware of that’s reversing deforestation (albeit on a much smaller scale).

The Divine Significance of the Sisterhood

You might notice (as I have) after looking at the maps of the area that there seems to be a deeply religious theme to the Kirkjubæjarklaustur area, and there’s a good reason for it.

And by religious, I mean just about everything here has a religious name to it like the Sister’s Cafe (Systrakaffi), or the name of the town Kirkjubæjarklaustur literally translated as “church farm cloister”.

Heck, you already know that Systrafoss means the “Sister Falls”.

I understand that during the infamous 1783 Lakagígar (or Laki) eruption, lava from its craters encroached on Kirkjubæjarklaustur in what appeared to be an inevitable inundation and burial of the town.

However, the lava’s flow miraculously halted and avoided the church here before ultimately sparing the rest of the town.

By the way, this very eruption lasted for 8 months and might have caused the famine that accelerated the events that resulted in the French Revolution and turned the geopolitics of Europe on its head.

Thus, it would be understandable why there’s a belief that somehow there was some divine intervention at play here.

And if you’ve paid attention to the Eyjafjallajökull [“EH-ya-fyat-luh-yewk-ul”] eruptions in 2010 (which had nothing on the 1783 Lakagigar eruption), then you can appreciate just how overwhelming these volcanic events can be.

Systrafoss resides in the South Region in Kirkjubæjarklaustur, Iceland. It is administered by the municipality of Skaftárhreppur. For information or inquiries about the general area as well as current conditions, you may want to try visiting their website.

Drive the Ring Road to Kirkjubæjarklaustur (259km east of Reykjavík).

While on the road through town, it goes by the visitor centre and the Sister’s Cafe (Systrakaffi).

Ultimately, the road will pass right before Systrafoss near some museums.

Finally, if the name Kirkjubæjarklaustur is too long, you could also just shorten it to Klaustur (“KLOI-stur”). 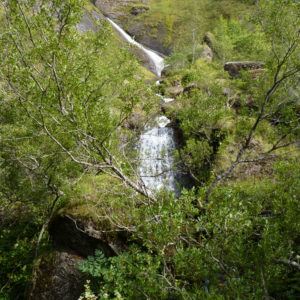