Urridafoss (Urriðafoss) was a wide waterfall that was said to carry the most volume of water over it as a result of its flow on the Þjórsá River, which also happened to be Iceland’s longest at 230km.

However, this waterfall was said to only be 6m tall at its tallest point so it took on more of an appearance like cascades and rapids.

The word urriða means trout in Icelandic, and sure enough, we noticed a handful of anglers fishing for trout as well as salmon.

Heck, even seal have been known to swim as far upstream as this waterfall to feast on the salmon here.

On our visit to Urriðafoss, which occurred in August 2021, we experienced the falls on a short jaunt to two overlook areas.

We noticed that there was also a trail leading to the banks of the river by the waterfall, but that was a private path built for anglers with fishing permits.

Beyond the two overlooks, I did notice that the trail continued further downstream though I can’t say how much further it went nor where it would go as we only went to the lookouts where the waterfall can be seen.

Speaking of the lookouts, we did see a memorial dedicatd to Einar Einarsson, who was born and raised near Urriðafoss and who devoted his life to fishing for salmon on the Þjórsá even in Summers when he moved permanently to Reykjavík.

During our August 2021 visit to Urriðafoss, I saw signage indicating that there are plans for the power company Landsvirkjun to harness the river’s power in a 130MW hydroelectrical plant.

If implemented, the dam would be built upriver and the falls would essentially be bypassed so this waterfall might meet the same fate as Lagarfoss in Iceland’s East Region.

Moreover, if the controversial Kárahnjúkar Hydroelectric Plant is any indication (where public sentiment still couldn’t stop the project from moving forward), who knows how much longer Urriðafoss will still be in existence?

It’s an all-too-familiar dilemma where an opportunity to make money almost always occurs at the expense of nature and the irreplaceable services it provides.

It also highlights the root cause issue of how market distortions and the politics to maintain the current wealth building machinations typically don’t adequately (if at all) price in such impacts for complete sustainability.

As a result, the valuations of the modern global economy and the associated politics resulting from it are the main drivers of why we’re in a mass extinction period exacerbated by Global Warming.

Urridafoss (Urriðafoss) resides in the South Region near Selfoss, Iceland. It is administered by the municipality of Rangárþing eystra. For information or inquiries about the general area as well as current conditions, you may want to try visiting their website.

Urridafoss (Urriðafoss) was just off the Ring Road between the towns of Selfoss and Hella.

From the roundabout just south of the bridge over the Ölfusá River in Selfoss, we’d continue east on the Ring Road (Austurvegur) for about 18km.

There was a signed turnoff for Urriðafoss right before the Ring Road crosses the bridge over the Þjórsá River.

Turning right at that turnoff (not crossing the bridge), we then drove about 1km to another signed turnoff to the left, where we then drove the remaining 150m to the car park.

Overall, this stretch of the drive would take about 15 minutes.

Going in the other direction from the roundabout east of the Ytri-Rangá River in Hella, we’d drive about 18km to the turnoff on the left for Urriðafoss (just after the bridge over the Þjórsá).

Overall, this drive would also take about 15 minutes.


Back and forth sweep from the last of the lookouts 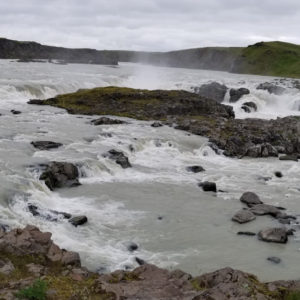 Urriðafoss – Iceland March 3, 2019 7:38 am by John Moerk - Urriðafoss is one of the largest waterfalls by volume in Iceland. It has a drop of only 12 feet, but is 750 feet in width. It lies on the River Þjórsá, on Route 1 just east of the intersection with Route 30. ...Read More