Catarata Gocta was perhaps the most impressive waterfall in all of Peru.

This waterfall was said to be “discovered” by westerners in 2005 when Stefan Ziemendorff noticed the waterfall during an archaeological expedition.

I must’ve misheard our Peruvian guide because I could have sworn that I thought he said the explorer’s name was Stefan Millandorf.

Anyways, in the following year of the “discovery”, he participated in a follow-up expedition that measured the total height of the waterfall at 771m.

We won’t get into details about whether this was the 3rd tallest or 5th tallest or 14th tallest waterfall in the world.

After all, there’s no consensus on a consistent definition of a waterfall anyway.

By the way, our guide mentioned that the name of the waterfall was derived from the sound that resident monkeys made.

We don’t know if that’s true, but it was a memorable little tid bit.

Given the obscurity of this waterfall until its accidental find by the Ziemendorff expedition, there was quite a bit of fanfare and publicity involving Catarata Gocta.

Yet despite such press, our experience with the falls still felt as if the area was far from overrun by mass tourism, especially when compared to Machu Picchu.

I’m sure it must’ve been far more difficult to access it in the past given its remoteness.

However, the tourism infrastructure (which was still a work in progress during our visit) definitely promised to make the falls even more accessible going forward.

We managed to experience Catarata Gocta in two different ways.

The first way involved hiking to the base of the upper waterfall.

The second way involved hiking to the base of the lower waterfall.

We’ll describe these excursions separately since each a trek that was best done as a full day excursion.

For the hike to the upper waterfall, we started from the village of San Pablo.

I recalled that our driver took an unpaved side road that deviated from the main road south of the town of Pedro Ruiz.

That narrow side road went up a few switchbacks and rockslide prone sections before arriving at the town of San Pablo.

That was where we met up with our local guide, and he promptly led us on a trail that left town.

It turned out to be the same trail that ultimately led to the base of the Upper Gocta Falls.

For the first 2 hours, the trail generally proceeded uphill with a few steeper sections along the way.

All this consistent climbing was a bit taxing, but since we were mostly on a wide ledge overlooking Cocachimba and the valley through which Catarata Gocta’s stream flowed, we were treated to attractive panoramas.

Our guide even pointed out the general area where the Ziemendorff expedition took place and from where he managed to spot this waterfall.

Along this initial couple of hours, we made it to a short detour that climbed steeply up to a cave containing some rock art, which added to the ancient feel of this place.

Further along the trail, we were able to look across the valley towards an attractive side waterfall called Catarata de Golondrina.

Probably past the two-hour point of the hike, we went past a local farm.

I suspected that the reason why this trail existed in the first place was to access this farm.

There was a local dog at this farm that liked to follow us, and it would continue to follow us for nearly an hour further.

It was during this stretch beyond the farm that we reached an exposed overlook of the entire Catarata Gocta (the photo you see at the top of this page).

Beyond the overlook (probably another hour later), our hike crossed over part of the Chorro Negro waterfall.

The trail continued to proceed through even more dense jungle before it ultimately led us to the bottom of the Upper Catarata Gocta.

During our April 2008 visit, there were lots of rungs on ladders that we had to climb on in order to get right up to the base of that upper waterfall.

We saw some trail work that was going on so I’d imagine future visitors should have less trouble than we had negotiating this steep part of the hike.

The base of the upper waterfall at the end of the trail was pretty misty and muddy.

It didn’t yield the greatest of photos, but the cool spray provided some welcome relief from all the strenuous hiking it took to get here.

Overall, the whole out-and-back hike took us about 7 hours including a few breaks here and there.

For the hike to the lower waterfall, we started from the village of Cocachimba.

We reached the turnoff that led to the village after continuing south on the main highway (which ultimately would’ve led to Chachapoyas) going past the turnoff for San Pablo.

The side road that led us to Cocachimba seemed to be much flatter than the road to San Pablo.

Eventually as we got close to the village, we started to be able to see the waterfall in the distance (as pictured below).

The vantage from this area provided us with somewhat of a sense of scale as the falls was fronted by the buildings that comprised the village.

Once we were at the village of Cocachimba, there were multilingual signs (though most were still in Spanish) that pointed the way to the trail leading to Catarata Gocta.

The trail to the falls immediately left the backside of the village, which itself only consisted of a few homes and a public building here and there.

We actually spent a night here in one of these buildings so we experienced firsthand how there was limited heat (think cold shower) and no electricity.

As for the trail itself, it began immediately with distant views of Catarata Gocta up ahead.

Even though it looked so tantalizingly close, it would still require quite a bit of a hike to get there.

Moreover, this trail involved lots more undulations as we found ourselves frequently climbing, then descending, then climbing again.

The elevation changed most dramatically when we had to get through at least two gullies (one of them crossed the stream containing Salto Golondrina).

During our trip, the swinging bridge over the Golondrina stream wasn’t complete.

Therefore, we had to climb down the steep embankment and cross the stream before climbing back up the other side of the embankment.

While the hike was also pretty strenuous and long, we did enjoy the fact that much of the trail harbored rocks containing shell-like fossils.

That indicated to us that this area must have been part of an ancient sea possibly millions of years ago.

Julie and I did express some concerned that we were encouraged to take the fossils as souvenirs.

After all, we knew that if everyone did that, there wouldn’t be any of these fossilized rocks left!

In addition to the fossils, we also noticed some old Chachas ruins flanking the trail.

These ruins further gave us a sense of the ancient heritage that took place in these mountains.

Indeed, this waterfall with its scenery and heritage had all the makings of a world class attraction.

Julie and I certainly hope it would remain that way.

Anyhow, at about 3 hours into the hike, we finally reached the base of the waterfall where we were close enough that we could only see the lower waterfall as the upper waterfall was concealed by the tall cliff in front of us.

During our visit, this lower waterfall had split into a pair of segments and took on an appearance that reminded me a lot like Shine Falls in New Zealand.

The mesmerizing motion of the water almost gave us the illusion like the water was coming down in slow motion given its somewhat wispy nature.

Like the upper waterfall, the overall amount of time we spent on this round trip excursion was also 7 hours.

Catarata Gocta resides near Chachapoyas in the Amazonas Department of Peru. For information or inquiries about the area as well as current conditions, you can try to visit their website.

As for accessing the general area, we can’t really provide exact directions since we were guided here.

However, we can say that it took us about 2 hours to drive from Pomacochas to the village of San Pablo for the Upper Gocta Waterfall.

It took us another hour to drive from San Pablo to Cocachimba, where the trail to the base of the Lower Gocta Waterfall started.

For geographical context, Cocachimba was 43km north of Chachapoyas, 325km northwest of Tarapoto, and 403km east of Chiclayo.

Fixated on the falls as seen from the upper trail


Fixated on the upper waterfall from its base


Bottom up sweep of the upper waterfall


Distant view of the falls as we approached Cocachimba


Fixated on the falls from afar as we approach its base


Bottom up sweep of the lower waterfall from its base 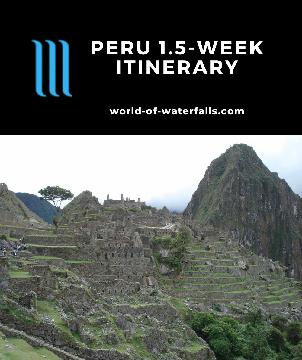 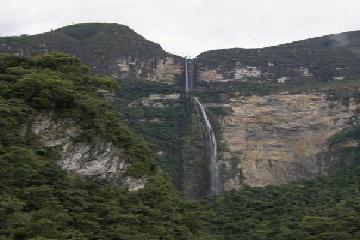 Impressive due to its height (Gocta) February 12, 2014 11:04 am by Georg - From a distance, Gocta waterfall seemed, well, pretty but quite average. During the nice hike in comfortable warm temperature, the waterfall grew bigger and bigger. At a certain point I've been impressed due to its height (look at the photos and compare one of the tall trees to the waterfall). Later, I could not see… ...Read More