El Chorrillo del Salto I believe was actually the name for both the river and the waterfall (though I’m not totally sure about this).

I’ve also seen the falls referred to as Cascada del Salto as well as Chorillo del Salto (though the latter I think was mispelled).

In any case, we thought this was a very pleasant little diversion as we were looking for a waterfall excursion that wouldn’t take a lot out of us (unlike some of the other longer hikes that we ended up doing in the area).

The waterfall apparently came from the melting snow and glaciers accumulated from the imposing Fitz Roy Massif, which was an impressive chain of tall and sharp mountains towering well behind the charming town of El Chaltén.

I believe the falls was 20m in height.

However, the falls faced east so it would probably be best seen in morning light.

Since we were here in the late afternoon when everything was in shadow, we were also able to take long exposure photographs, but the dominance of shadows ensured that there wouldn’t be a whole lot of color in our photos.

Then again, had we come earlier in the day, we might’ve had to contend with shadows splitting the scene which would’ve made for terrible photographs.

Also, I’m sure its flow would diminish over time the later into the Patagonian Summer it would get.

We were able to get decent direct views of the waterfall from the end of the trail as well as more angled (but somewhat suboptimal) views from a steep scrambling path that went higher up the cliff alongside the falls.

I recalled having to do a little bit of skirting the stream to get the photo you see at the very top of the page without getting my feet wet.

If we had to walk to Chorrillo del Salto from El Chaltén, it would have been about 3km one-way (or 1 hour) from town.

However, we hired a car and got closer to the trailhead.

So we ended up only spending about 30+ minutes of walking in each direction.

Actually, we stopped the car at the wrong place (about 800m before the actual car park) so the amount of walking could be even far less than what we ended up doing to get to the falls.

We certainly could’ve saved ourselves a bit of time and effort by simply paying better attention to the signs.

The walk was mostly flat and quite easy to follow.

From El Chaltén, continue on Route 23 north for about 3km to its car park.

The trail continues a little over 500m from there to the falls. 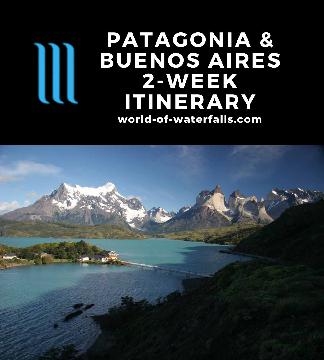