Orinduik Falls was included as a throw-in for our day tour to Kaieteur Falls, and it contrasted Kaieteur in many ways.

For starters, this was a wide, multi-tiered series of cascades featuring plunge pools beneath the horizontal expanse of the Ireng River.

These pools allowed us to swim or at least soak to cool off from the tropical heat.

The name of the falls was said to be based on the Amerindian word for a type of native plant in the area, which also contrasted with Kaieteur being named after an Amerindian chief.

After landing at a nearby airstrip, we were guided to a house where we had an opportunity to change into swimwear while leaving behind our belongings that we didn’t want to get wet.

As far as experiencing the waterfalls, Orinduik Falls allowed us to touch and feel its refreshing waters.

However, Kaieteur Falls provided more of a look-but-don’t-touch experience, which made it less “interactive”, so to speak.

Given the width of the Orinduik Falls, we got our most comprehensive view of it from the air.

Once we touched down on the ground, we never could see the entirety of Orinduik Falls in one go.

Indeed, we found it difficult to photograph the entire waterfall adequately so we had to pick and choose how we wanted to compose it in our photographs.

The photo you see on the top of this page was probably my best effort at showing the waterfall’s extensive width as well as its layered appearance.

Finally, the Orinduik Falls flowed on the Ireng River, which flowed very close to the Brazilian border in an area that was more of a savannah than the vast carpet of rainforest on the Guyana Shield at Kaieteur.

The river eventually would join up with the Tukutu River before ultimately joining up with the mighty Amazon River in Brazil.

Orinduik Falls resides in the Potaro-Siparuni Region near the Guyana-Brazil border reachable by air from Georgetown, Guyana. It is administered by Ministry of Communities of the Cooperative Republic of Guyana. For more information or inquiries about the area as well as current conditions, you can try visiting their website.

Since we were able to do Orinduik Falls on the same excursion as for Kaieteur Falls, read this page to get a sense of the logistics we had to consider to make this trip happen.

Just to give you a sense of context, we had based ourselves in Georgetown on the coastal northeast of Guyana.

It took an entire day to do a day tour that took in this waterfall as well as the mighty Kaieteur Falls.

Sweep of the wide cascading waterfall near the Guyana/Brazil border 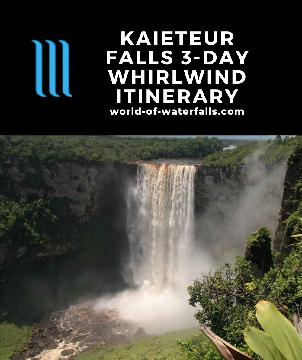