Salto Arrechea seemed to us to be a bit off the beaten path even though I think it was technically part of the larger network of waterfalls comprising Iguazú Falls.

We’ve treated this as a separate waterfall because we had to hike about 90 minutes to get there from the Sheraton Iguazú along Sendero Macuco.

It was said to be 2.5km each way though I did read somewhere that it was actually 7km return.

In any case, it only took us another hour to return to the general Iguazú Falls area, but it was for that reason (that we had to do some hiking) that we did get a pretty peaceful experience.

After all, there were far fewer tourists and the sounds of the jungle were broken only by Brazilian tour helicopters periodically flying over Iguazú Falls.

Given the relative peace and quiet of Sendero Macuco, we were told that it was possible to see exotic wildlife within the subtropical rainforest that the trail meandered through.

The morning would probably be the best time for this, but one thing we always kept in the back of our minds was the presence of jaguars.

But other than that one incident, I believed that as long as we stayed together and didn’t go it alone, we were fine.

In our visit, we saw lots of colorful butterflies and heard some native birds here and there.

The waterfall was a thin but tall 30m or so.

It clearly lacked the size and force of the larger more famous neighboring waterfall, but it seemed like Salto Arrechea was more of an excuse to escape crowds and go for a refreshing swim.

We even noticed a guy who felt comfortable enough with the relative seclusion here to go for a skinny dip.

The trail also provided a viewpoint at the top of this waterfall.

From there, we followed a steep path leaving the boardwalk descending to the base of the waterfall for access to its plunge pool.

Salto Arrechea resides near Puerto Iguazú in the province of Misiones, Argentina. To my knowledge, there doesn’t appear to be an official governmental authority directly managing Iguazu Falls National Park. Instead, it seems to me that the governmental authority has delegated management responsibilities to the primary concessioners, which is subject to change.

So for information or inquiries about the area as well as current conditions, you can try visiting Iguazu Argentina website. I don’t think it is sanctioned by the governments as authoritative sources of information, but it should get you started on any further inquiries you may have.

Since we stayed at the Sheraton Iguazú on the Argentina side, we didn’t need any motorized transport to get onto this trail.

I recalled we walked the road connecting the hotel and the visitor center.

The somewhat “hidden” trailhead was within this stretch of road.

For context, the Sheraton Iguazú was near Puerto Iguazú, which itself was about 6.5 hours flight from Buenos Aires. 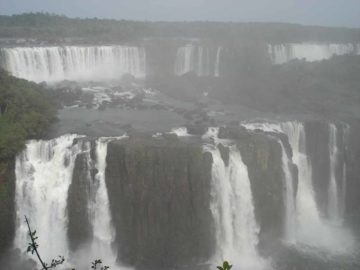 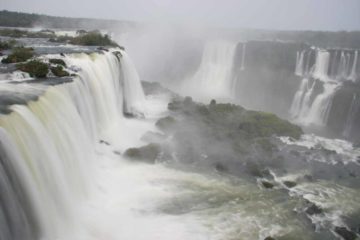