Bowen Falls was the first major waterfall that we encountered while visiting the famous Milford Sound.

I felt inclined to give this waterfall its own write-up because there was a trail that left from the Milford Sound wharf and ended up right at the base of this majestic 161m waterfall.

By the way, this was said to be the tallest permanent waterfall in the fiord though it only competed with Stirling Falls for that title.

In any case, we weren’t able to hike to the bottom of Bowen Falls in November 2004 because they closed off the trail due to cliff instability not long before our arrival (bummer!).

When we made a return trip five years later in December 2009, we came to the realization that this trail closure might be permanent because it was still closed at that time.

So the only way we were able to really experience the falls was from one of those Milford Sound cruises that just about everyone that comes here would do.

We also got a chance to see it when we took the boat shuttle from Sandfly Point at the end of the multi-day Milford Track and ended up back at the Milford Sound wharf.

Finally, we also managed to see a partial view of the waterfall from one of the side roads leading to shores of the Deepwater Basin at the very south end of the Milford Sound.

Despite our inability to get to truly experience Bowen Falls in a more intimate setting, I decided to give the falls the benefit of the doubt in terms of the scenic rating.

After all, I still reckon that it could very well be the most photographed waterfall in the Milford Sound simply because it was so close to the dock area, while facing New Zealand’s most dramatic and most famous fiord.

Indeed, with this waterfall, I admit that I was partial to it because of its location.

It’s not often that you get a convenient waterfalling excuse resulting in what could very well that rare magical waterfalling experience that could only happen in a very special place like this.

Speaking of magical places, there was so much more to the Milford Sound (including more waterfalls) than what was stated and shown on this page.

I tried to capture the remainder of that experience outside of Bowen Falls in our Stirling Falls write-up.

Bowen Falls resides in Fiordland National Park near Te Anau in the Fiordland region of South Island, New Zealand. It is administered under the jurisdiction of the Department of Conservation. For information or inquiries about the area as well as current conditions, visit their website.

Allow a little over 2 hours (depending on traffic) for this drive.

Approaching the falls on the return leg of the cruise


Bottom up closeup sweep of the falls 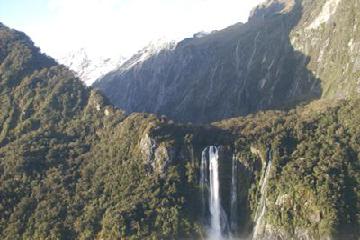 Bowen and Stirling Falls, September 2001 March 23, 2012 9:46 pm by Jeffrey Howe - We were told before we drove up to Milford Sound that they'd been through a dry spell, so some of the waterfalls might not look their best. We were also told a bit of a storm might be moving in from the sea. What followed was a torrential gale that made handling the small caravan… ...Read More