Kaiate Falls (also refered to by its Maori name “Te Rerekawau” or “Te Rere Kawau” as well as Te Rerekawau Falls) was actually a pair of impressive waterfalls.

The first main section consisted of a three-tiered series of falls.

The second section followed the first one up with an attractive plunge of a lower waterfall.

This waterfall was also formerly known as “Shag Falls”, but as tempting as it was to think of the Austin Powers

interpretation of the word “shag”, this word actually referred to wildlife.

More specifically, it was the powerful black and white shag, which was a long-necked sea bird known for its strong, unswerving flight as it could dive from the sky to catch fish in the water.

Apparently, there used to be a shag colony located nearby the lower waterfall, which it was said that Maori warriors often identified with shags as guardian spirits.

I visited this waterfall as part of an early morning visit while staying in the port of Tauranga.

From the car park (see directions below), I followed a figure-8 loop track in a clockwise manner as I headed downhill and veered left to stay alongside the Kaiate Stream.

There was also an alternate path that joined this track from the Kaiate Falls Rd (formerly Upper Papamoa Road), which I’d imagine might be for those who wouldn’t or couldn’t start from the car park.

At each junction, there were helpful signs letting me know where I was throughout the figure-8 loop so I had no trouble getting to where I needed to go.

During the initial descent, the track followed alongside what would turn out to be the first Kaiate Falls.

Its three-tiered section was said to have a cumulative height of about 25m.

The bush partially blocked the views of this part of the falls until I got towards the bottom of the descent.

Once I got to the junction at the bottom of the steps, I realized that I was able to improve my view by briefly going up the wooden steps to the right of the junction.

Ultimately, that was what yielded the view you see at the top of this page.

Finishing the Kaiate Falls Loop Track past the Lower Falls

Continuing back down past the bridge before the base of this upper waterfall, the clockwise loop track continued making its stair-stepped descent on the opposite side of the Kaiate Stream.

After a few minutes of this stretch of rock and bush, I finally started to see the lower waterfall, which made its dramatic 10m drop into a secluded plunge pool.

The track skirted the plunge pool and crossed a rocky ledge before the descent flattened out as it crossed a bridge over the creek then climbed uphill to a lookout.

This lookout provided a view of the upper Kaiate Falls through black tree ferns.

After staying left at the next junction (to avoid returning to the bottom of the upper falls), I was on the final leg of the return track to the car park.

It was during this stretch that I glimpsed over my right shoulder to get distant views of Mt Maunganui and the port of Tauranga.

Overall, I spent about 45 minutes to do the entire trail. I’d probably give it an hour or more for a real leisurely stroll.

Kaiate Falls resides near the city of Tauranga in the Bay of Plenty region of North Island, New Zealand. It is administered by the Western Bay of Plenty District Council. For information or inquiries about the area as well as current conditions, visit their website or their Facebook page.

The drive to the Kaiate Falls Scenic Reserve took me between 20-30 minutes from the centre of Tauranga.

Crossing over the SH2 bridge to head south to the SH29/SH2 junction, I then briefly headed southwest on SH29 before turning left onto Welcome Bay Rd.

I followed Welcome Bay Rd for about 6.4km to Waitao Rd on my right.

Then I followed Waitao Rd for about 5km before veering left to go onto Kaitate Falls Rd (formerly Upper Papamoa Rd) for the next kilometre.

Next, I made a sharp left turn onto a short gravel road to arrive at the signposted car park to start the hike.

At the time of my visit in November 2004, I saw some unnerving signs of past break-ins here as there were broken glass on the ground.

So it would be best to minimize the likelihood of theft by leaving the valuables in the accommodation and not in the car.

For context, Tauranga was about 2.5 hours drive (without traffic) or 211km from Auckland. Tauranga was also about 90 minutes drive (105km) east of Hamilton, or under an hour drive (64km) north of Rotorua. 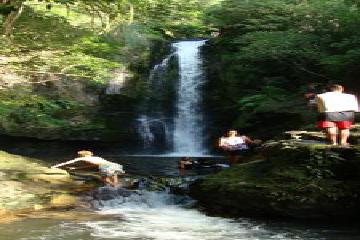 Rerekawau Falls January 3, 2011 7:45 pm by Brent - Went there with my teenagers and their friends recently. Amazing place. The lower falls pool is really deep. One of the boys jumped from the top, it was amazing. Recommend a visit ...Read More