Those extras pertained to some filming locations, and apparently, in The Two Towers

, the falls was the location of the Forbidden Pool.

This was where Gollum was caught by Faramir (with a little guilty deception from Frodo).

There was quite a bit of CGI and it was hard to tell how much of a resemblance the waterfall was to the cameo it made in the movie.

Nevertheless, we were glad that the movie helped to bring us to this site as we were treated to a pleasant 25m tall plunge waterfall on the slopes of Mt Ruapehu in Tongariro National Park.

Actually, the visit to the Mangawhero Falls was pretty straightforward.

From the signed car park (see directions below), it was only a short 150m walk to the overlook yielding the view you see pictured at the top of this page.

The lookout was perched at the top of the crumbly cliffs looking across from the grotto right towards the falls.

However, it didn’t look like there was a sanctioned way of getting down to the base of the waterfall and its plunge pool (aka “The Forbidden Pool”).

So our visit was brief (no more than 20 minutes), and most of that time was spent just chilling out at the overlook checking out both the falls and the expanse downslope.

Since we had timed our visit to be in November, Mangawhero Falls had a pretty healthy flow as the waters were free falling into its rocky grotto below.

The spray from the crashing action of the water certainly must have helped to create the deep recess behind it in a typical process of waterfall formation.

From the size of that recess, it seemed like this must be a pretty old waterfall.

That said, I’ve seen pictures in the literature where the falls wasn’t doing so well later in the season.

Undoubtedly, the source of the falls was snow melt, and the highest likelihood of seeing it with healthy flow would be during the Spring runoff.

Mangawhero Falls resides in Tongariro National Park near Ohakune in the Central North Island region of New Zealand. It is administered under the jurisdiction of the Department of Conservation. For information or inquiries about the area as well as current conditions, visit their website.

We drove to Mangawhero Falls as it was upslope on the slopes of Mt Ruapehu from Ohakune.

From the intersection of SH49 and Goldfinch St in the centre of Ohakune, we headed north on Goldfinch St.

This street passed through town (assuming other street names like Mangawhero Terrace along the way), then eventually became Ohakune Mountain Road.

The signposted car park was on our right after about 15km from the Goldfinch St and SH49 intersection.

Note that the car park for Waitonga Falls was about 1.4km before the Mangawhero Falls car park, which was also on the east side of Ohakune Mountain Road.

For reference, we drove from Turangi to Ohakune via the Desert Rd (SH1) to Waiouru, then on the SH49 to Ohakune. This drive was about 94km long. Turangi was about 50km south of Taupo. Taupo was nearly 3.5 hours drive (278km) south of Auckland. In the other direction, Ohakune was about 100km north of Wanganui. 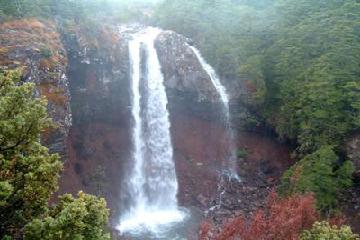 Cold doesn’t even begin to describe it (Mangawhero Falls) November 3, 2008 11:28 am by Kendy - August of 2007, my dad and I took a short trip to NZ, which I've always wanted to do. We were the only ones booked on the trip around lake Taupo and Tongiriro park that day. This was one of our stops. I do happen to be a Lord of the Rings fan, and I… ...Read More