Ohau Falls was a thin but pretty 25-30m waterfall that turned out to be quite the popular spot when we made a visit here in early January 2010.

We had been told that New Zealand fur seals would sometimes swim their way up to the falls (said to be in the Winter), which would make this waterfall very unique in that aspect.

That said, Julie and I didn’t spot any fur seals during our visit since we came in the Summer and there were probably way too many people around the falls anyways.

Nevertheless, we had seen other trip reports in the literature as well as a visitor submission that confirmed that they do indeed come here from time to time.

In addition to the New Zealand fur seals, Ohau Falls was also our waterfalling excuse to explore the area around Kaikoura.

In fact, in the early morning hours on the day of our visit to the falls, we did a whale watching tour where we got to see at least three sperm whales (one of which did a tail splash before diving) as well as a whole school of dusky dolphins doing backflips.

It had to have been one of the most memorable tours we had ever done.

In any case, our visit to Ohau Falls began from a roadside pullout (see directions below) where we then followed a trail that went upstream along the Ohau Stream.

Given the warm sunny day during our visit, the shadiness of the narrow gorge cut by the Ohau Stream provided some welcome relief from the heat.

The walk was pretty developed as it was a mix of boardwalk and bridges along with conventional dirt trail.

After a little over five minutes of walking (the sign estimated 10 minutes in each direction), we arrived at the very busy plunge pool and base of the Ohau Falls.

Apparently, the presence of the amount of people here certainly made us realize how popular this place was.

Given the high contrast between the shady confines of its cove and the bright sun shining right on the plunge of the water, the falls appeared to be very bright and washed out in our photos.

So it didn’t take long before we left the falls and headed back to the trailhead, but our adventure didn’t end there.

Instead, we crossed the state highway and continued onto the rocky coastline where we got to see the famed New Zealand fur seals from a respectful distance.

Indeed, we probably spent more time seeing them do what they do than we did around the waterfall itself.

Ohau Falls resides in the Okiwi Bay – Half Moon Bay area near Kaikoura in the Marlborough region of South Island, New Zealand. It is administered under the jurisdiction of the Department of Conservation. For information or inquiries about the area as well as current conditions, visit their website.

We drove to Ohau Falls from the seaside town of Kaikoura (about 200km north of Christchurch) so we’ll describe the driving route from there.

From Kaikoura, we drove roughly 27km north on SH1 towards a large signposted pullout saying “Ohau Stream” on the inland side of the highway right at a large bend in the road.

The pullout acting as car park was quite full, but we were fortunate to have found one of the remaining few spaces when we showed up at midday on New Year’s Day.

Coming from the other direction, the falls was about 102km (roughly 90 minutes) south of Blenheim along SH1.

Fur seals at Ohau falls confirmed December 4, 2010 4:36 am by Daryn Foster - I have copied a web address below as proof the fur seal pups do visit the pools at the base of Ohau falls. I was surfing the net and came across this site with images showing the pups at the falls. I intend to go and visit Ohau Falls myself and hopefully get some great… ...Read More 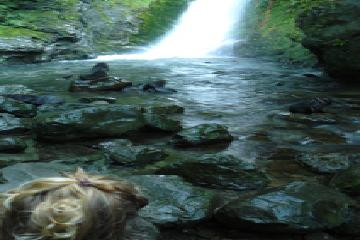 Fur seal pups (Ohau Falls) May 14, 2011 11:29 pm by Jacquie Walters - My husband, two little girls (4 yrs and 3 yrs) and I stopped here last weekend and were amazed to see around 50 fur seal pups frolicking in these waterfalls. It was probably one of the most amazing nature experiences of my life. ...Read More
Yes, Seals Do Frequent Ohau Falls October 31, 2010 11:21 pm by Alan Baldwin - Joyce and I first visited Ohau Falls late in March 2008, after reading about them in Anna & Andrew Jameson's book "Accessible Walks". After passing under the railway viaduct, we heard some splashes and saw seal pups moving towards the sea. A little way further along the track we met a NZ couple taking movies… ...Read More