Shine Falls was one of the off-the-beaten-track waterfalls that Julie and I went looking for as we made the drive between Wairoa and Napier in the drier Hawke’s Bay Region of New Zealand.

We sought out this falls because it was considered to be the Hawke’s Bay Region’s tallest waterfall at a reported 58m tall.

The falls itself had an interesting shape as it kind of resembled the outline of a hooded figure.

But perhaps the one thing I remembered most about this excursion was the rocky paddock we crossed at the start of the track.

I have no idea why I made this association, but maybe it was the juxtaposition of undulated grasslands flanked by the large wind-swept rock formations that might have conjured up such imagery.

Julie and I began the hike from the small car park area (see directions below).

From there, we immediately went past a stile to scale a fence designed to keep the sheep in the grassy paddock we were about to cross.

Once we got into the paddock, we then followed a series of arrowed poles, which took us across the wide grassy area shared with sheep.

The Department of Conservation (DOC) told us that they had recently widened the track to reduce the reliance on these poles.

Once we got past this Sound of Music-like paddock, we then crossed another stile (leaving behind the sheep) before going through a lightly forested area.

After traversing through this semi-open area sprinkled with a few trees, we then went into a much thicker bushwalk signposted for the Boundary Stream Scenic Reserve.

The track continued undulating as it passed through native flora with signs and numbers indicating trap locations for the predatory pests the Mainland Island project seeked to eradicate.

After roughly 45 minutes of hiking through the lush bush scenery, we finally started to see the upper portion of Shine Falls, which hastened our steps even further.

Eventually, the track descended to a stream crossed by a footbridge, which then followed the stream itself.

The track ultimately led right to the base of the impressive waterfall, where we noticed a picnic table as well as a tranquil plunge pool.

Overall, Julie and I had spent about 1 hour and 45 minutes round trip though DOC recommended allowing 2 hours return.

The Boundary Stream Scenic Reserve was one of several examples of a so-called “Mainland Island”.

Mainland Islands were areas in New Zealand managed in a way that attempted to recover pre-European conditions.

Specifically, they sought to eradicate pests such as possums and stoats, which didn’t exist prior to European settlement. In fact, these pests were introduced shortly after the first Europeans had arrived.

In conjunction with eradication efforts, the project also sought to preserve the native species such as the flightless kiwi bird, which were especially threatened by the introduced species.

The authorities sought to do this through means of isolation via fencing as well as setting up traps laced with poisons targeted towards non-native species.

Shine Falls resides in the Boundary Stream area between Wairoa and Napier in the Hawke’s Bay region of North Island, New Zealand. It is administered under the jurisdiction of the Department of Conservation. For information or inquiries about the area as well as current conditions, visit their website.

While there was more than one way of reaching the trailhead for Shine Falls, we’ll describe the route that Julie and I took from Wairoa.

From Wairoa, we drove some 64km west on SH2 until we turned off at the unsealed Matahorua Rd.

We drove on Matahorua Rd for about 7.6km to the Heays Access Rd on our right.

It definitely helped that there was signage for Shine Falls to help us correctly turn off on this road.

Next, we followed Heays Access Rd through idyllic pastures for the next 6.6km to the signposted car park for Shine Falls.

When we continued the drive towards Napier after the hike, we had taken the Heays Access Rd back to Matahorua Rd, but we turned right and followed Matahorua Rd for about 11km to the SH2 by the town of Tutira (about 44km north of Napier or 75km west of Wairoa). This route could be taken in reverse to get to the trailhead if you were heading north on the SH2 from Bay View, Napier, or Hastings.

For some additional context, Napier was over 5 hours drive southeast of Auckland and over 4 hours drive northeast of Wellington. 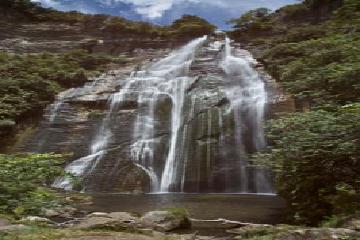 Shine Falls January 5, 2010 7:56 pm by Grant Macfarlane - We visited this waterfall located between Napier and Wairoa in the holiday break between Christmas and New Year. It is a fantastic sight and well worth the two hour return walk to see it. The walk to the falls is through Department of Conservation land which they have fenced off to try and protected the… ...Read More