Julie and I made it a point to visit Tarawera Falls after coming across pictures of it during our pre-trip research.

What lured us in was the unusual characteristic of a waterfall seemingly bursting out from tall cliffs as if it was a thundering spring.

The high cliffs were remnants of an old lava flow that abruptly stopped some 11,000 years ago.

It turned out that the Tarawera River (sourced by Lake Tarawera) flowed mostly through a combination of fissures and tunnels.

We’ve been told that we could have seen these fissures and tunnels from the much longer Tarawera Outlet Track.

In any case, after about 350m or so, the track went to a lookout revealing the last 30-35m drop of Tarawera Falls.

We had seen in the literature that sometimes a taller companion waterfall plunges and towers over the main waterfall.

Clearly, this wasn’t the case during our visit as you can see in the photo above.

I’d imagine that multi-waterfall state would only occur during periods of high water yet it might also explain why some sources claimed the falls to have a height of 65m.

Tarawera Falls was sort of an out-of-the-way waterfall for us even though it was pretty close to the buried village of Te Wairoa as the crow would fly.

During our visit in November 2004, it was raining and we didn’t think there was an option of boating across Lake Tarawera to reach this gushing waterfall.

However, we ended up driving in a bit of a roundabout manner to the logging town of Kawerau before reaching the northeast end of Lake Tarawera (see directions below).

Then, we did a short walk to earn the view you see at the top of this page.

Speaking of the walk, signs at the car park indicated that it was a 20-minute walk in each direction.

The path was pretty easy to follow and passed through native bush (including rare hybrids of pohutukawa and rata) on its way to the main lookout.

Given the poor weather during our visit, we didn’t do any further exploration though the walking path clearly kept going beyond the overlook.

Tarawera Falls resides in the Lake Tarawera Scenic Reserve near Kawerau in the Bay of Plenty region of North Island, New Zealand. It is administered under the jurisdiction of the Department of Conservation. For information or inquiries about the area as well as current conditions, visit their website.

To reach Tarawera Falls, the nearest land-based route that we were aware of was from the town of Kawerau.

In order to reach the waterfall from Kawerau, we had to obtain a permit from the Kawerau Information Centre.

That was because the road to get there was through private logging roads.

From the junction of SH30/SH30A in Rotorua, we drove about 47km east along SH30 past four lakes (Lake Rotorua, Lake Rotoiti, Lake Rotoehu, and Lake Rotoma) to the SH34 (Kawerau Rd) turnoff.

We then took SH34 for about 6km into the town centre of Kawerau.

At that point, we turned right on Islington St, then another right onto Tarawera Ct.

The Kawerau Information Centre was found here near the Bank of New Zealand.

This part of the drive took us about 45 minutes.

Once the permits were obtained, we then had to continue south on Islington St (200m), then turned left onto Onslow St (475m), then turned right onto River Rd (1km) before turning left onto Waterhouse St.

After about 1.2km on Waterhouse Rd, we then turned right onto Tarawera Rd (which quickly became unsealed) and followed this road for 12km.

We then followed the signs and kept right onto Fentons Mill Rd (branching off of Tarawera Rd) and followed this road for another 4.3km to Forestry Rd on the left.

Next, we took Forestry Rd for another 1km (the unsealed roads got a little rougher here) before turning left onto Waterfall Rd to its end after some 4km or so.

It took us over 30 minutes to get from Kawerau to the car park for Tarawera Falls.

That said, we were made aware of alternative transport options (including boat taxis across Lake Tarawera from the western side of the lake driving past Te Wairoa from Rotorua) after the fact.

So that might be a better option, especially if permits could not be obtained from Kawerau for one reason or another.

Rotorua was about a 3 hours drive southeast of Auckland. 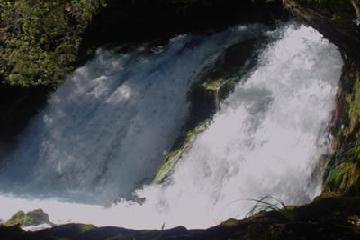 Tarawera Falls, New Zealand June 23, 2009 6:03 pm by Mathew Prichard - Hi again Johnny, I notice there is a write up about Tarawera Falls in the New Zealand waterfall reviews section. Here's a pic of a waterfall further upstream toward Lake Tarawera(as discussed by Steve Peake). Feel free to put that below his waterfall review. Cheers, Matt ...Read More
Another Way to Witness Tarawera Falls October 4, 2008 7:53 am by Steve Peake - There is another way to witness Tarawera Waterfalls. By far the best way is via water taxi across Lake Tarawera. This deposits you at the lakes outflow where a good track broadly follows the river until the river begins to vanish. It is wonderfull geology and delightful native forest. Eventually you descend the cliff face… ...Read More