Waiau Falls was a small (maybe 5-10m) but picturesque waterfall with a plunge pool that seemed to attract quite a few people here during our warm, sunny day visit to Whitianga (pronounced “FIT-ee-ahng-uh”) in January 2010.

Somehow, Julie and I managed to miss this waterfall on our November 2004 visit to the nearby town of Whitianga despite getting married there.

I guess in our moment of forgetfulness, we certainly weren’t going to be denied a visit to this falls on our second go-around over 5 years later.

That said, we could totally see why the Waiau Falls was so popular as the plunge pool seemed deep enough and calm enough for people to cool off here.

While Julie and I weren’t interesting in going for a swim, we didn’t mind sitting back and just watching the scene before us as the falls made the perfect backdrop to people playing before it.

Indeed, this was a pretty easy waterfall to experience.

We took a short path that descended from the car park (see directions below) towards the base of the waterfall and its shady plunge pool.

Julie and I managed to have a brief moment alone at the Waiau Falls as people went in and out of here.

However, any moment of solitude only occurred for a brief moment before the next wave of folks showed up.

So this further attested to Waiau Falls’ popularity.

As if that wasn’t enough, it was also possible to extend a visit here to incorporate Kauri trees on the Kauri Grove Lookout Walk.

We happened to spot one from the 309 road on the way to Waiau Falls, but I wasn’t sure if that was the same tree we would have encountered from the Kauri Grove Lookout Walk.

The Flow of Waiau Falls

As for its flow, it seemed like Waiau Falls had decent flow despite the apparent drought conditions on the Coromandel Peninsula during our January 2010 visit.

To hear the words drought and New Zealand used together was quite weird to us.

In any case, I suspect this waterfall would flow reliably given our observations of its healthy flow despite the relatively low rainfall.

So that must certainly mean that its flow would most likely improve even more under more “normal” rainfall conditions.

Scrambling to the top of Waiau Falls

There was also a scrambling path to the top of the Waiau Falls, which began from the opposite end of the car park (we actually went this way initially).

This one was a little steeper, and the views weren’t as satisfying.

When we found ourselves at the brink of the falls, I could see straight away that it would have been foolish to try to take the shortcut to go right down to the base of the falls from here.

Instead, we went back up to the car park, then took the more established track towards the base of the falls as mentioned above.

Certainly the extra couple of minutes spent doing this far outweighed the risk of injury by attempting to jump into the short dropoff.

Waiau Falls resides in the Coromandel Town area near Whitianga in the Coromandel region of North Island, New Zealand. It is administered under the jurisdiction of the Department of Conservation. For information or inquiries about the area as well as current conditions, visit their website.

The Waiau Falls car park is right off the unsealed 309 Road connecting Coromandel and Whitianga.

It was about 7km east of Coromandel and just under 20km west of Whitianga.

During our January 2010 visit, we were a little bit confused coming here from Whitianga because there was a sign indicating the falls, but there was neither a car park nor a track nearby it.

It turned out that we hadn’t gone far enough to the west along the 309 road.

So that’s something to be aware of if you’re coming from the east.

Top down sweep of the falls


Fixated on the dimunitive but attractive falls 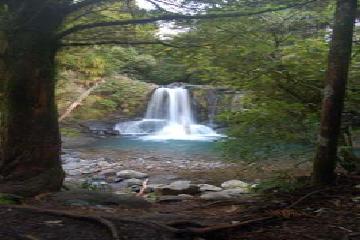 Waiau Falls September 9, 2008 6:52 am by Ian Smith - Waterfalls weren't on my agenda this particular day. In fact, the amazing tourist railway at Coromandel was all I was thinking of but, as is my wont, I decided to come home on a different road, albeit an unsealed one. Though the route was the shortest back to our accommodation at Tairua, most people avoid… ...Read More