Wentworth Falls (also called Wentworth Valley Falls) was one of the taller waterfalls that I happened to encounter while touring the Coromandel area.

Said to be 50m tall, it comprised of two steep and angled leaps.

The view you see at the top of this page was from the official lookout.

However, I had also read that it was possible to reach the bottom of the falls even though I couldn’t find that path during my visit.

This was the first waterfall that we visited after our wedding in Whitianga (“FIT-tee-ahnga”).

We probably should have seen Waiau Falls first since it was closer, but we had completely overlooked it and ended up seeing this waterfall on the way towards Tauranga.

Right from the get go, a sign greeted me with verbiage suggesting that I had to hike for at least 1 hour and 15 minutes.

However, it didn’t say if that duration was round trip or in each direction.

I ended up taking close to two hours return so I’m sure the sign ultimately meant one-way.

In any case, I managed to shave off some time from the overall predicted round-trip time because I hiked quickly and solo as I didn’t want Julie to be waiting in the car for me for too long.

For the first few minutes, I was walking through mostly open space and grassy clearings.

There were several paths leading away from the main track probably leading to camping areas, picnic areas, or even abandoned gold mines.

The mines seemed to suggest a rich history about gold in the area.

As I continued following the signs, the track then narrowed and followed alongside the Wentworth River towards the falls for the next 3km or so.

About 25 minutes from the start of the track, I noticed an abandoned gold mine entrance right besides the main track.

I dared not enter due to the possibility of the mine shafts collapsing, but it looked to be sealed anyways.

About a third of the way through the forested track, I encountered an unbridged stream crossing (of the Young Stream) where hiking sticks aided the boulder hop to get across without drenching the feet.

The path continued uneventfully through more bush until I made a second crossing (of the Campbell Stream this time), which was also fairly long and required a bit of nimbleness to stay dry.

My trekking poles further aided my attempts to keep my balance while keeping my feet dry.

After the second stream crossing, the track undulated some more then started climbing.

Before the climb became really steep, there was a signposted turnoff indicating the lookout of Wentworth Falls.

Shortly after taking this spur, I was at the viewpoint that yielded the photo you see at the top of this page.

Even though I went looking for a way to get to the bottom, I didn’t find it. Maybe I didn’t look hard enough.

Back on the main track, the steep climb eventually started to flatten out as I was now looking over the top of the waterfall.

The view from up here was a little anti-climactic, and it was the spot where I turned back to return to the trailhead.

According to the maps, the track would keep going until it would eventually lead to Marototo Road in another 10km.

Wentworth Falls resides in the Coromandel Forest Park near Whangamata in the Coromandel region of North Island, New Zealand. It is administered under the jurisdiction of the Department of Conservation. For information or inquiries about the area as well as current conditions, visit their website.

Starting from the town centre of Whangamata (pronounced “fahng-ah-mah-TAH”), we headed south on Port Rd towards its junction with Tairua Rd (SH25).

Then, we drove for about 1.6km until we then turned right onto Wentworth Valley Rd, which was mostly unsealed.

We followed this road for another 5km, traversing a concrete ford along the way, to its end near the Bushland Park Lodge. 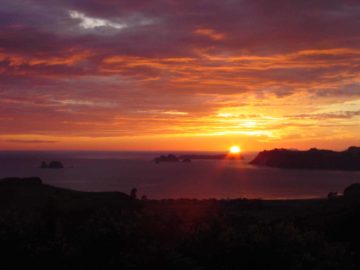 If you have a waterfall story or write-up that you'd like to share, feel free to click the button below and fill out the form...
Wentworth Falls: Access Update April 2010 October 31, 2010 8:10 pm by Alan Baldwin - My wife Joyce and I visited this waterfall on 7th April 2010. Do not be be deterred by Johnny's mention and pictures of stream crossings. The track has been upgraded since his visit. It is to DOC's walking path standard throughout. All stream crossings are either avoided or bridged. This was good as we are… ...Read More