Whangarei Falls (pronounced “FAHNG-uh-ray”) was a pleasing 26m rectangular waterfall that we visited while we were staying nearby in the maritime city of Whangarei.

The operative word with this waterfall was peaceful.

Not only we were mesmerized by the four columns of water plunging side by side each other as we walked the loop track and saw it from several angles, but we were also calmed by the serenity of the reserve.

We even noticed ducks swimming across the wide plunge pool before the base of the falls, which attested to the area’s tranquility.

Indeed, I could envision spending more than the 45 minutes we had spent here.

That way, we could have extended the walk to other attractions (such as the AH Reed Memorial Park to see Kauri Trees as well as another waterfall).

We could have even spent more time than we did unwinding with a tranquil picnic as we noticed some inviting picnic tables.

It was amazing to Julie and I that such serenity was present even though we were only 5km outside the city centre of Whangarei in the Tikipunga suburb.

For all intents and purposes, Whangarei Falls was an urban waterfall, but it contrasted with our pre-conceptions and limited expectations of urban waterfalls in general.

From the car park, we took a short path that cut through an open grassy area.

It didn’t take long before the path quickly led us to a lookout where we looked over the brink of the waterfall as well as a birds-eye view of the picnic area and plunge pool below.

We then followed the 1km loop track in an anti-clockwise manner as the track descended (not too steeply) through the base until we ended up at the picnic area that we had seen earlier from the top.

We then got more views from the bridge spanning the Hatea River, where we looked upstream at the waterfall’s plunge pool.

Beyond the bridge, we then continued the track back up to the top of the falls, where we traversed stepping stones to re-cross the stream and return to the lookout near the car park.

Whangarei Falls resides in the Whangarei Falls Scenic Reserve in Whangarei in the Northland region of North Island, New Zealand. It is administered under the jurisdiction of the Whangarei District Council. For information or inquiries about the area as well as current conditions, visit their website.

Whangarei Falls pretty much sat on the outskirts of the city of Whangarei.

From the roundabout joining Walton St and Bank St in the city centre in Whangarei, we headed north on Bank St.

After about 1.4km, we then kept right at a fork onto Mill Rd (not going left onto Kamo Rd), which eventually became Kiripaka Rd after another 1.8km.

We kept on Kiripaka Rd for another 2.4km when we saw a small street (Boundary Rd) to our right, which we took, then prompty hung another left to get into the car park for the Whangarei Scenic Reserve.

To get to the Walton St and Bank St roundabout mentioned above from SH1, Tarewa Rd, Maunu Rd, and Central Av all head east to that roundabout.

Perhaps the route with the least surface street driving would be to take the SH1 to the Station Rd exit, then go east on Station Rd for about 800m, turning right onto Corks Rd, then continuing for another 2.2km to Kiripaka Rd.

Then, turn left onto Kiripaka Rd and drive another 500m or so to Boundary Rd as described above.

To give you some context, the city of Whangarei was over 2 hours drive (158km) north of Auckland.

Whangarei Waterfall June 13, 2011 3:09 am by Nabreska du Plessis - I was there and it's absolutely amazing to watch it. The sound is so peaceful. First the calm water start cobbling over the rocks and runs faster and faster to the edge and then the down fall of all that water. This is something you have to experience yourself to enjoy it. In summer time… ...Read More 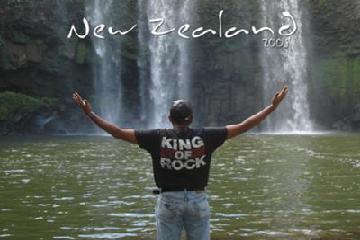 Land Of Nature (Whangarei Falls) November 2, 2008 8:13 am by Jason Ananthan - Hi, I'm Jason from Malaysia. We stopped by Whangarei Falls and was welcomed by the sound of its falling water. It was a very beautiful and relaxing place to be. We spent over an hour here just appreciating nature at its best. I highly recommend everyone who visits the North Island to drop by this… ...Read More