Eidsfossen was a powerful waterfall on the aptly-named Storelva (Big River) that literally made us feel like the ground beneath our feet was trembling.

Indeed, the operative word with this waterfall was “power”, and it was most certainly on display during our late June 2005 visit to this region of Norway.

When we returned to this waterfall 14 years later, it still had a lot of power, but it wasn’t quite as rigorous as on our first visit.

In any case, it was no wonder that we saw infrastructure around the falls indicating that it was being tapped for hydroelectricity.

Yet even with this degree of intervention, the falls was still flowing forcefully.

Imagine how much crazier the falls would be flowing if the hydro infrastructure wasn’t there!

There was so much spray kicked up by the base of the falls that there were even bold rainbows arcing just downstream of the waterfall’s main drop.

The falls was said to have a cumulative height of 33m, which Julie and I were able to appreciate from a couple of viewing spots.

The Upper Viewing Spot for Eidsfossen

From the upper viewing spot near the brink of its power drop (as shown in the photo above), we also noticed there was a salmon ladder.

This ladder was said to be the longest in the world at 230m as it allowed salmon to continue swimming upstream past this otherwise impenetrable barrier on the Gloppen River.

I had read after the trip that the largest known catch along this stretch of river was an amazing 26kg!

Anyhow, it was from this vantage point that we truly felt dwarfed by the sheer volume of water that was passing by us.

Julie and I couldn’t even hear ourselves talk from here.

After having our fill of the upper vantage point, we then continued driving a short distance downstream where there was a very wide plunge pool as well as a look back at the falls from a distance.

Yet even though we were on the opposite end of the large plunge pool, we were still getting so much spray from the falls that it was difficult to photograph.

This was further exacerbated by the fact that the mid-morning sun was also somewhat against us as we viewed it.

Moreover, we were stymied by the muddy terrain around the river thanks to the constant spray so we were limited on where else we could go to change up the view.

Then, there was the ugly power station to the left of the falls that also conspired to make this vantage point a bit less appealing to linger around much longer.

A Different Kind of Waterfall

In any case, most of the waterfalls we had seen in Norway to this point were of the tall and stringy variety.

However, with Eidsfossen, it was definitely about the immense power which contrasted our other Norwegian waterfalling experiences nicely.

So with all things considered, this waterfall had all the makings of being a very highly-rated 4 waterfall (especially with the bold rainbow and the sheer feeling of being humbled by something so thunderous).

However, we ultimately dropped it down to a 3.5 given the hydroelectric infrastructure around it.

Eidsfossen resides in the Gloppen Municipality near Sandane in Sogn og Fjordane County, Norway. For information or inquiries about the area as well as current conditions, visit their website or Facebook page.

We drove to Eidsfossen as a short out-and-back detour from the town of Byrkjelo.

We then turned left at a very easy-to-miss signed turnoff for Eidsfossen.

Next, we followed the signs along the unsealed road for about 850m to the upper car park for Eidsfossen.

To get to the bottom view of Eidsfossen, we continued down the unpaved road for about 300m passing the power station and towards an unmarked pullout.

This part of the drive took us about 30 minutes.

Going in the opposite direction, from the E39 and Fv615 turnoff for Sandane, we drove east on the E39 for about 2km before turning right at the signposted turnoff onto the unsealed road mentioned above.


Semi circular sweep of the base of Eidsfossen 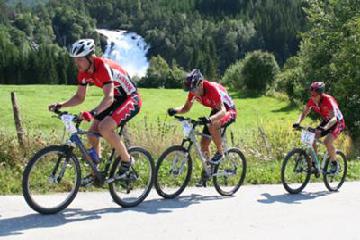